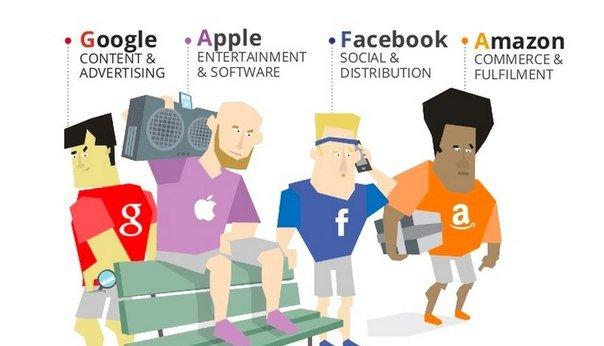 Vulnerability and growth prospects for these major tech companies.

How to view innovation.

Why some aren’t as vulnerable as they appear.

A lot has been made recently of the challenges for major tech companies like Apple (NASDAQ:AAPL), Amazon (NASDAQ:AMZN), Google (NASDAQ:GOOG) (NASDAQ:GOOGL) and Facebook (NASDAQ:FB), concerning being so heavily reliant on one revenue stream to drive growth.

The basic premise is some are closing in on the ceiling of growth in their respective core businesses, and it’s questionable if they’ll be able to maintain a decent growth pace if they can’t solve their perceived one-trick pony problem.

That’s not to say they don’t have other businesses, only that with the exception of Amazon, they haven’t been able to provide another product or service that can replace the growth trajectory once their existing revenue stream matures.

We’ll look at each company and see what level of vulnerability they face and what they’re trying to do to correct it. But First, I want to deal with the idea of vulnerability as it relates in general to all the companies.

How I see it at this time is Apple is probably the most vulnerable because of it being close to reaching the upper end of market share in the U.S. and its difficulty in penetrating the Chinese market.

The other companies, in my view, still have a lot of room to grow with their legacy businesses, and don’t face the short-term risk Apple does. That doesn’t mean Apple won’t pull through with the iPhone 8, only that it has to.

What a lot of analysts and investors have done is lump in the major tech companies in one group and look at their business models without breaking down the room in the market for growth.

For example, Google could eventually be vulnerable to online ad revenue slowing down, but the reality is there is still a lot of ad agencies and brands that are spending on traditional media. There’s still a lot of upside growth potential as consumers increasingly use online outlets to consume media.

Some day Google will have to figure out another meaningful revenue stream, but it has more time to do so than Apple does.

As I already mentioned, Apple’s growth risk is more immediate because of its dependence on iPhone 8 having to be a hit in the near term. If it fails to meet or exceed expectations, the share price of Apple will reflect that disappointment.

If it does sell very well, Apple will have bought itself another year or so to develop other products or services. That’s the risk side.

Another element talked about for Apple in regard to the iPhone is whether or not it has reached the ceiling concerning innovation. I think the way to view this isn’t if the company is able to change things – the market seems to have taken that as the problem. I don’t see it that way.