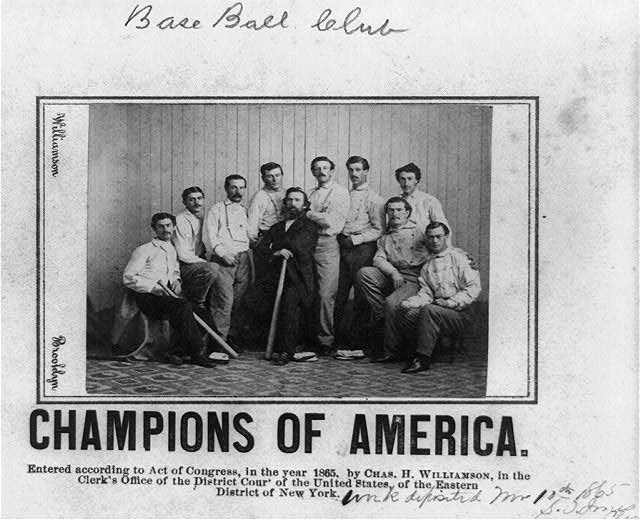 This 1865 portrait of the Brooklyn Atlantics is considered an early prototype for baseball cards.

Baseball “has the snap, go, fling, of the American atmosphere—belongs as much to our institutions, fits into them as significantly, as our constitutions [and] laws.
—Walt Whitman

What better way to welcome April—National Poetry Month and the start of baseball season—than with a quotation about baseball from one of America’s greatest poets?

Americans have debated the exact origins of their national pastime for more than a century. But it’s generally agreed that the American game of baseball started in towns and cities of New England, New York and the Mid-Atlantic, with rules of play varying by region. The Knickerbocker Club, formed in New York in 1845, was among the first organized baseball clubs. It instituted the so-called New York rules, considered to be the basis for the modern game. On June 19, 1846, the Knickerbockers played under the rules for the first time at Elysian Fields in Hoboken, New Jersey. The local press championed the sport, including Walt Whitman, who as an editor of the Brooklyn Daily Eagle in 1846, proclaimed, “The game of baseball is glorious.” An avid player himself, Whitman associated baseball with vigor, masculinity and health.

The Civil War boosted the popularity of the game, which was often played by soldiers in camp. After the war, they took it home with them, and it spread to every region of the country. As baseball increasingly captured the American imagination, baseball-inspired visual works proliferated, a trend continued to this day.

“Champions of America” is a portrait of the Brooklyn Atlantics. Mounted on a card, the photo was passed out as a souvenir to fans and is considered an early prototype for baseball cards, which first became popular in the 1880s. The Brooklyn Atlantics won championships in 1861, 1864 and 1865. Their season continued throughout the winter, when the team donned skates and played on frozen ponds.

The type at the bottom of the photograph indicates that photographer Charles Williamson registered the copyright to the photo in 1865 in U.S. district court for the Eastern District of New York.

The Library of Congress has a collection of more than 2,000 early baseball cards from 1887 to 1914. They portray such legendary figures as Ty Cobb stealing third base for Detroit, Tris Speaker batting for Boston and Cy Young posing in his Cleveland uniform.