Cities grow, adapt and change, like all living things. The Library’s map collections show this in all sorts of unexpected ways, offering a vision of days gone by, of what “normal” once looked like. We present you with some fascinating glimpses of the cities of yesteryear in this edition of the Library’s Free to Use and Reuse sets of copyright-free images.

The good news about these, if you haven’t seen them before, is that they are yours for the taking — print them out, blow them up into huge posters, use them for laptop screensavers. It’s your choice. In the past few months, we’ve highlighted classic movie theaters, genealogy, maps of discovery and exploration and so on, but there are lots more.

In this edition, let’s start where Tony Bennett left his heart — San Francisco. It looked a little different in 1846, the scene this map depicts, before the gold rush that gave the hometown football team its mascot (the ’49ers). It was Mexican-held territory and known as Yerba Buena for the aromatic herbs that grew in the area. Sleepy, not much doing, a long way from anywhere. Then, gold was discovered in the nearby foothills. Four years later, California was a state. Mark Twain, who rose to fame in the city’s rough-and-tumble journalism and literature scene, was still two two decades away. The city’s architectural icon, the Golden Gate Bridge, wasn’t built for another nine decades.

You marvel, looking at these houses in 1846, at how quiet the nights would have been, how starry the skies.

Speaking of bucolic backwaters…how about the nation’s capital? (We kid because we love, D.C.!) The District of Columbia was few people’s idea of paradise in the late 19th century. Swampy, hot, with nothing like the sophistication of Philadelphia, New York or Boston, the city still had ambitions, though. The above map shows part of the city’s proposal to host the “World Exposition of 1892 and the Permanent Exposition of the Three Americas.”

The 1892 World’s Fair, as it was commonly known, was a big deal. It was to mark the 400th anniversary of Columbus landing in the Americas. D.C. was game for it, entering an ambitious bid that included much of what is now the National Mall for a strip of permanent exhibits.

To get oriented, you’ll see the Capitol Building off to the far right and the Washington Monument dead center. But the Lincoln Memorial, which should be at the map’s far left, is not there, as it wouldn’t be built for another three decades. The Jefferson Memorial, today somewhere around those four lakes at bottom right, wouldn’t be built for another five.

Instead, where the Lincoln Memorial and Reflecting Pool are today, developers proposed permanent exhibits for the “Three Americas,” a middle one devoted to “Working Models of Great American Inventions” and the third, closest to the Washington Monument, devoted to a “State and Territorial Exhibit.”

It never happened. The World Exposition picked Chicago. It opened in 1893, covered nearly 700 acres, drew more than 25 million people and is famous for the debut of, among other things, the Ferris Wheel. Also, of course, there was the small matter of serial killer H.H. Holmes living nearby, which gave us Erik Larson’s terrific 2002 book, “The Devil in the White City.” So maybe D.C. was better off all the way around missing this thing. 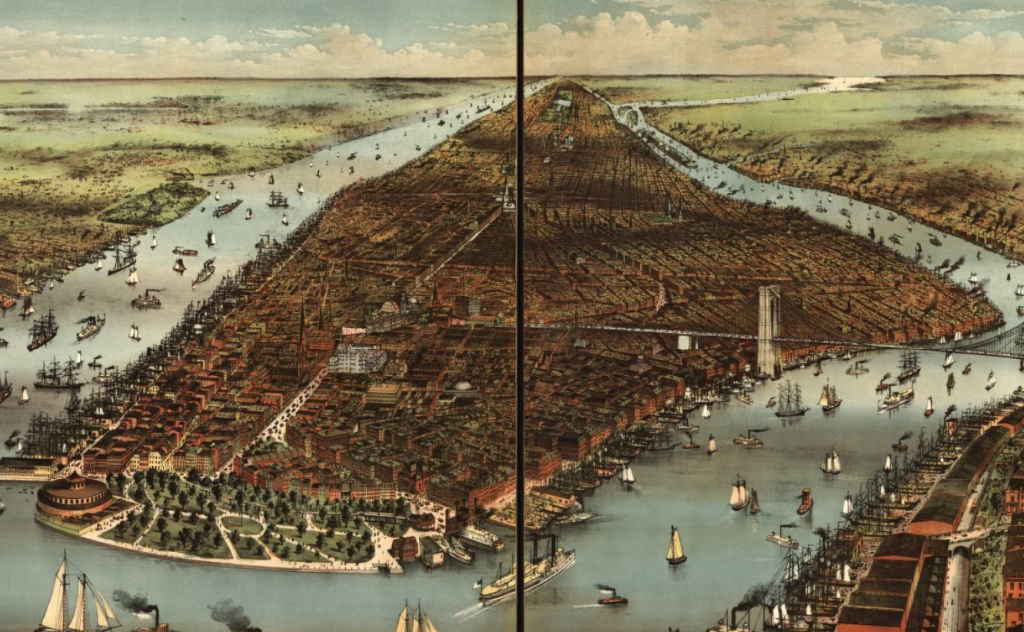 And of course, New York, New York, big city of dreams. In 1883, it was easier to see that Manhattan really is an island, boats thereby being essential transport. Books, loading docks, wharves, piers — they’re everywhere. A few years earlier in this era, Walt Whitman (whose papers are at the Library) penned his immortal “Crossing Brookyn Ferry.” Here he is, catching that view in a verse:

“Ah, what can ever be more stately and admirable to me than mast-hemm’d Manhattan? River and sunset and scallop-edg’d waves of flood-tide? The sea-gulls oscillating their bodies, the hay-boat in the twilight, and the belated lighter?” A city of poetry, in any era.