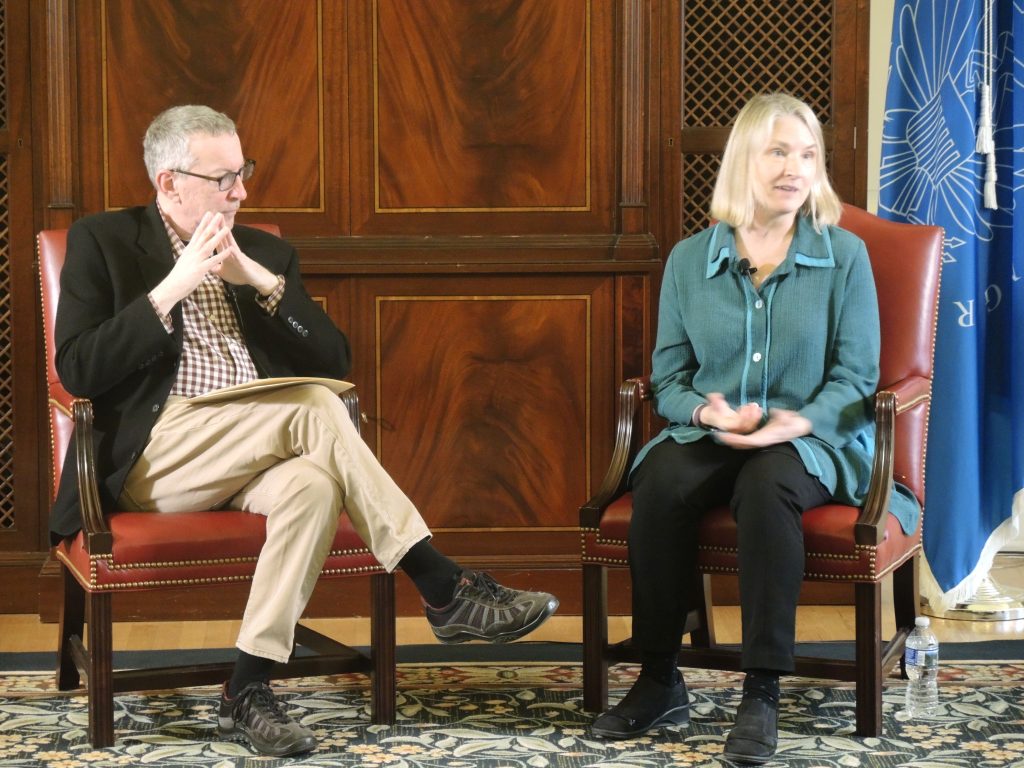 Larry Appelbaum, left, with Ingrid Monson in the Whittall Pavilion on March 1. Photo by Michael Turpin.

Ingrid Monson is the Quincy Jones Professor of African American Music at Harvard University and an award-winning author and scholar whose work in jazz, African American music and the music of the African diaspora is greatly respected. Her books include “Freedom Sounds: Civil Rights Call Out to Jazz and Africa” and “Saying Something: Jazz Improvisation and Interaction.”

Monson spent two weeks in March in residence at the Library of Congress conducting research in the Music Division’s jazz collections. She did so under the auspices of the Jazz Scholar Program, a collaborative effort of the Library and the Reva and David Logan Foundation.

On March 1, Monson sat down with Larry Appelbaum, the Music Division’s jazz specialist, in the Whittall Pavilion to discuss her research in the Max Roach Collection.

Jazz drummer and composer Roach (1924–2007) was a pioneer of the modernist style known as bebop and a highly regarded creator of innovative jazz, whose collection the Library acquired in 2013. It includes his personal papers, musical scores, audiovisual recordings and related materials.

The following is an excerpt from the interview between Appelbaum and Monson.

Monson: I was delighted to be invited to come to the Library of Congress and be here for two weeks in residence. I’ve wanted to come and work on the Max Roach Papers for quite some time, and you just made it easy. . . . 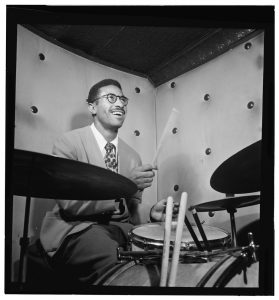 Max Roach at the Three Deuces Club in New York in October 1947. From the William P. Gottlieb Collection.

Appelbaum: I know you wanted to look at Max Roach. Is there something in particular you are hoping to find, and what are you discovering so far?

Monson: Well, I’m very interested in this collection, partly because I wrote a great deal about Max Roach in “Freedom Sounds.” I interviewed him for it, I interviewed Abbey Lincoln [jazz vocalist, actress and wife of Roach from 1962 to 1970] and a number of related people. I went through the documents that were available to me then. But his archive was not available then. So one of the key things I want to look at is what’s in the archive that can enrich the story I’ve already told or correct the story I’ve already told.

So the first box I got out on Monday were the scores to the “Freedom Now Suite” [a 1960 album Roach co-authored with Oscar Brown, Jr., known formally as “We Insist! Freedom Now”]. The care with which these scores are put together is really interesting. Every part of the suite has a score. They’re very detailed, including drum parts . . . for “Triptych,” which is the middle movement.

And then I learned that there was originally an overture written for it that I’ve never heard—it’s there in the box—and that there were some other songs that were being considered between he and Oscar Brown. There are some scores for that material as well. Already I have an expanded sense of . . . their process of trying things out.

There’s also a lot of correspondence that relates to . . . something else that I wrote about in my book “Freedom Sounds,” which was about [jazz critic] Ira Gitler’s review of Abbey Lincoln’s “Straight Ahead” in 1961, which, just, shall we say . . .

[Lincoln wrote lyrics about race relations for several of the album’s songs, for which Gitler harshly condemned her in racial terms.]

Monson: Stirred controversy is to put it lightly. There was this huge debate about racial prejudice in jazz in early 1962 in [jazz magazine] “Down Beat.” . . . What I found in the correspondence just in the last couple of days is that at the time that Ira Gitler’s review came out, which would have been some time in November of 1961, they [Max Roach and Abbey Lincoln] contacted a lawyer. . . . So the availability of materials like this just enriches what you’re able to see and what you’re able to know about this amazing career that Max Roach had. . . .

Appelbaum: So when you initially interviewed Max about [the “Freedom Now Suite”], what was his take all these years later?

Monson: He was very proud of it. [Monson explains that Roach did not provide extensive details when she interviewed him because he was working on an autobiography at the time with poet and playwright Amiri Baraka. The autobiography was never completed.] . . . But here in the archive are the interviews that they did around 1995 and some drafts that they were working on. That’s another thing I’m taking a look at here. . . .

Appelbaum: If Max were here with us today, what would you like to ask him, these years later?

Monson: One of the things that’s overwhelmed me the last couple of days is I’ve gone through a number of his business papers. And it’s very clear to me that he was deeply involved in the running of his own affairs; [he] had very clear conceptions of his works. In the archive are these yellow notepads where he’s written these elaborate letters in longhand in pencil. Before they’re sent, he’s given them to somebody to type up, so then there’s a typed version of it, too. But he goes back and corrects things. He was right on top of the details of how he was going to be represented in pamphlets and things publicizing his appearances. [He was] very involved in fine-tuning contractual issues. And I think he worked very hard to get paid what he thought he was worth. It’s clear that he was a tough negotiator with these things.

There are also drafts in there of plays that I think he wrote or . . . multimedia kinds of projects in which he very carefully sketches out the drafts, writes a rationale for . . . what his over-arching artistic goals are. So you see an artist at work, and you realize that one thing that an artist like him does is has a vision and works extremely hard to make it happen. So there he is, the logistics of all the instruments that need to be hired, the scoring, the staging, the lighting. I would simply want to ask him more about this and how he moved from the administrative side of his career to the creative side and back. . . .

Appelbaum: We’ve been talking about Roach because that’s been your focus so far. Are there other collections you are particularly interested in, and what do you hope to find in those collections?

Monson: Well, thanks to you, you’ve been showing me these gems from all sorts of collections. I feel like I could stay here for six months. There are so many wonderful things. . . . I’m very interested in the economic picture. There’s a lot of talk about unfair record deals. . . . It’s very difficult to get hard economic information—except from musicians who kept their contracts. . . . You can find out what people got paid, what the terms of their contracts were. So you have a better idea of the economic picture for musicians at the time. I’m very excited at looking at those materials. I’m interested in copyright issues also, so I want to make a trip to the Copyright [Office].

On March 9, Monson gave a public lecture at the Library of Congress discussing her research in the Music Division’s collections.