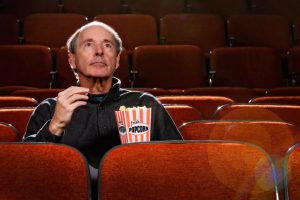 For the past three decades or so, Thomas Doherty has taught and written about films, television and Hollywood — a lot. An American studies professor at Brandeis University with a special interest in classical Hollywood, he has written seven books touching on topics including teen movies, censorship, Hitler and McCarthyism. His latest book, “Show Trial: Hollywood, HUAC, and the Birth of the Blacklist,” was published in April 2018. Doherty also writes about film for the Hollywood Reporter, Cineaste magazine and other publications, and he advocates for film, television and radio preservation.

For years now, Doherty’s work has brought him into close contact with the Library of Congress and its staff. He testified in the 1990s about the state of American television and video preservation for a major Library report on the subject; more recently, as a member of the Library’s Radio Preservation Task Force, he has articulated the value of Golden Age radio for teaching cultural history.

For his research and writing, Doherty has also drawn extensively on the Library’s vast film, television and video archives, most recently for “Show Trial.” Here he answers a few questions about his scholarship and his connections to the Library.

Tell us a little about your background and how you became a film enthusiast.
I was an Air Force brat, and the base movie theaters (back in the day) were real centers of community for the kids in remote postings — not to mention permissible sites for budding adolescent romance. The programming was along the lines of the old classical Hollywood model, with frequent changeovers in the offerings. So I got into the habit of going two or three times a week — it wasn’t like you could play around outside at Eielson Air Force Base near Fairbanks, Alaska, in the dead of a long winter. That’s where I first got the movie bug.

How did you come to teach film and television as a scholar?
I weaseled my way into it as an American studies scholar. Film remains, I think, a perfect way to teach American cultural history — to select a likely film from the past and view it through the lens of its time. In my teaching, I try to keep an eye on both the aesthetic qualities of a film and its historical resonance — the way, say, the accelerating cross-cutting in “The Birth of a Nation” (1915) seduces the viewer into identifying with the KKK.

What is “Show Trial” about, and why did you want to write it now?
“Show Trial” covers the first great media-political spectacle of the postwar era, the investigation by the House Committee on Un-American Activities (HUAC) into alleged communist subversion in Hollywood — a courtroom-like, high-stakes drama starring glamorous actors, colorful moguls, on-the-make congressmen, high-priced lawyers, single-minded investigators and recalcitrant screenwriters, all recorded under the lights of the newsreel cameras and broadcast over radio. I wanted to explain the political backstory to the hearings and detail the ideological agenda and theatrical elements of a proceeding that bridged the realms of entertainment and politics. The book chronicles the story of the Hollywood Ten — motion picture artists who were held in contempt of Congress and went to prison for refusing to say whether they were members of the Communist Party — and the other witnesses, friendly and unfriendly, who testified. It also covers the Committee for the First Amendment, the delegation from Hollywood that flew to Washington to protest the hearings, and the implementation of the postwar blacklist. In an age in which constraints on public discourse can seem positively Cold War-ish, and where past behavior deemed retrospectively awful can derail a career, I thought a reminder of another made-for-media political frenzy might be timely.

Which collections from the Library did you draw on for the book?
I became a fixture on the third floor of the Madison Building, where the Moving Image Section is located. The staff was characteristically helpful in dredging up the extant newsreel footage from the 1947 HUAC hearings and the other relevant materials in the archives — not just films but also trade press publications. The five newsreel companies covered the 1947 hearings like a blanket — you can see the lineup of the vintage 35mm Mitchell cameras behind the dais. One interesting fact movie-picture-wise is that the hearings from 1947 were the only HUAC hearings in D.C. covered by the newsreels. Responding to charges that the presence of the cameras created a “circus atmosphere,” the House banned the newsreels from subsequent HUAC hearings — which explains why every time you see a documentary on the Hollywood blacklist, the filmmaker has to unspool footage from the 1947 hearings as cinematic shorthand for all of the hearings. Oh, one more thing: the Moving Image Section librarians no longer let you cue up the film reels yourself: scholars from, shall we say, a younger generation have no experience in threading a projector, so for safety’s sake, the policy is to have the professionals do it.

What other collections have you used over the years?
The Motion Picture, Broadcasting and Recorded Sound Division and its infinitely patient and knowledgeable staff has been a go-to source for virtually everything I’ve written over the years. Of course, the main library has virtually every book and periodical known to man. Walking into that glorious rotunda, I always feel 20 IQ points more intelligent.

How did you end up on the Library’s Radio Preservation Task Force?
I am an all-around media geek, and the history of radio is so fascinating. Unlike theatrical cinema, which is an entertainment option we have now, radio as it existed in its golden age is a lost gestalt. Also lost are so many of the shows and news stories, so anytime you find a radio show from the 1930s, it’s like stumbling upon a treasure. That’s one of the reasons the Radio Preservation Task Force is so important — to help find the lost broadcasts and make them available. Funny, though, radio is so durable and persistent, changing but keeping on as a central media presence — like today, with the explosion in podcasts. There’s still an almost genetic need to listen to the human voice — whether around a campfire or driving to work.

What has your experience been like working with Library staff?
To paraphrase Blanche Dubois from “A Streetcar Named Desire”: I have always depended on the kindness of archivists. Not only do they find the stuff you’re looking for, but they point you to places you might not have thought of. Even in the age of digital search engines, there’s no substitute for a knowledgeable human who knows where the archival bodies are buried deep in the bowels of the Library. In short, my experience has been nothing like the priggish treatment given to the reporter who visits the Thatcher Library in “Citizen Kane.”

How would you describe the research value of the Library’s film collections?
Irreplaceable? Indispensable? I am always shocked that so much of the great work in film, radio and TV is lost, that the networks and the studios weren’t better custodians of their legacy. Fortunately, the Library has been there to fill in so many of the gaps.