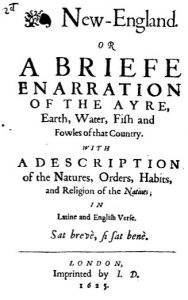 This is a guest post by Andrew Gaudio, a reference librarian in the Researcher and Reference Services Division.

As the Library of Congress’ specialist in Latin language and literature, I have come to appreciate a small but important body of Latin texts from the American British colonies and early United States written during the 17th, 18th and 19th centuries. The Library holds most of these early American Latin texts.

In 1625, the first poem written in the English colonies in both Latin and English described the cultural interactions of immigrants with native peoples.

Early American Latin writings can be found in many different sources, such as church records, obituaries, private journals, university records, eulogies and theological works. For example, since early American universities held instruction in Latin, and because Latin was the lingua franca among scholars, many early university records and documentation are in Latin as well. Indeed, historical records from most colleges founded in 17th- or 18th-century colonial New England will contain some Latin. In Samuel Eliot Morison’s “Harvard College in the Seventeenth Century,” he mentions two especially interesting Latin texts in the Harvard University archives, one prose and one a poem, each written by Native American students in the 1650s. These texts are significant as the only surviving Latin writings composed by Native Americans.

The Library’s collections of early American Latin writings are not confined to print availability. George Washington and Thomas Jefferson are among the Founding Fathers who at times corresponded in Latin, and a few Latin items in their papers can be found online.

Additionally, a database to which the Library subscribes, “Early English Books Online,” contains the earliest poem written in the English colonies in 1625 in both Latin and English. The poem is called “New England; or, A briefe enarration of the ayre, earth, water, fish and fowles of that country, with a description of the natures, orders, habits, and religion of the natives; in Latine and English verse,” and it describes the flora, fauna and cultural interactions of the natives and Puritans.

Two biographies of George Washington in the Library’s general collections, both published in 1835, demonstrate the widespread use of Latin during the early Republic. Both were written in 1835: “Washingtonii Vita” was written by Francis Glass, a schoolteacher from Ohio, and “Georgii Washingtonis Vita” was written by William Lance, an attorney from Charleston, South Carolina. The existence of these biographies indicates the facility with which those who were educated could compose in Latin. Included here is the Latin text of the first page of the latter biography, followed by an English translation to give a flavor of the style of writing frequently employed in Latin: 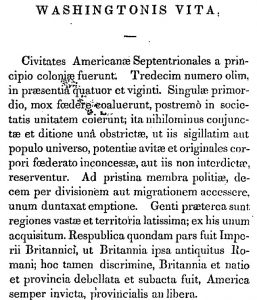 “The North American states were colonies in the beginning. Formerly 13 in number, there are presently 24 states. Originally separate, each state united together into a federation and finally joined in a pact of solidarity. Nevertheless, they have been joined together and bound under one authority in such a way that the ancestral and original powers – not granted to the federal body or not forbidden by them – are reserved to them individually or to the entire people. To the original members of the republic, 10 have been added through division or migration, and only one by purchase. Part of the Republic formerly belonged to the British Empire, just as that very Britain formerly belonged to Ancient Rome. Nonetheless, having considered this distinction, Britain and its people and province were conquered and subdued. America always unconquered, remains provincial, or rather free.”

To learn more about Latin-language materials and resources at the Library, search our online catalog.