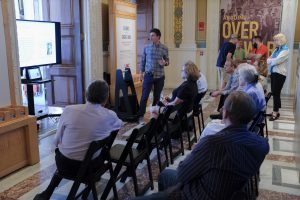 This interview with Ryan Reft, a historian in the Manuscript Division, first appeared on the “Teaching with the Library of Congress” blog.

Ryan Reft (standing) gives a presentation in June about original manuscripts included in the Library’s exhibition “Echoes of the Great War.” Photo by Shawn Miller.

Describe what you do at the Library.
One of the great things about my job is that the work changes on a daily basis. At the risk of over-simplifying: I oversee Manuscript Division collections that relate to domestic policy, which includes congressional papers; holdings related to certain cabinet officials, nongovernment organizations, journalists, Supreme Court justices and federal court judges; and our LGBTQ collections. One day I might curate a temporary exhibit for a congressional event; on another day, I might speak with members of the media regarding our collections; other times, I review potential collections for acquisition. I was also fortunate to work with Cheryl Regan and Sahr Conway-Lanz in curating the Library’s current exhibit Echoes of the Great War: American Experiences of World War I. Finally, I frequently help researchers navigate and explore our holdings, which can be a lot of fun. I not only get to learn about new history being made or discovered, but also contribute to it by aiding historians and others in their pursuit of new revealing narratives about our nation’s past.

What is your favorite item from the Library’s online collections?
I’m going to steal a page from my colleague Sahr Conway-Lanz, who noted in a blog post from last year that it is the connection between collections and the larger whole that is so fascinating. I write about our collections in both scholarly and popular venues. Rarely does a single item serve as a key to some historical mystery, but a collection of documents taken together as a sort of contextual whole can. 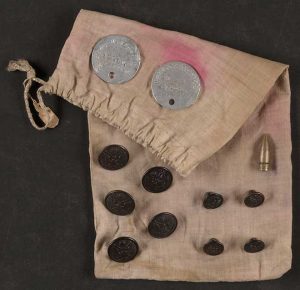 That said, however, the dog tags and coat buttons of civil rights pioneer Charles Hamilton Houston on display in our “Echoes of the Great War” exhibit encapsulate the kind of influence the war cast on its participants. Houston earned these dog tags and coat buttons by graduating from the first officers’ training camp for African-Americans organized during the war. Though segregated, the camp, like his service overseas, was an eye-opening experience for Houston, who returned from World War I determined to battle racism and segregation in American life. He became dean of Howard Law School and from that position trained Thurgood Marshall and others, while also serving as the NAACP’s most prominent lawyer for much of the 1930s and early 1940s. We discovered Hamilton’s dog tags in the papers of his father, William LePre Houston, which the Manuscript Division houses. We had no idea they were there, so it was a great surprise.

Describe an interesting discovery from the Library’s collections.
I went to the University of California, San Diego, for my Ph.D. in urban history. Being in California shifted my focus toward western history and the New Right of the 1970s and 1980s, a conservative political movement that had its roots in Southern California. When we acquired the papers of David Broder, the Pulitzer Prize-winning journalist from The Washington Star, The New York Times and The Washington Post, I was thrilled to discover his coverage of the 1966 gubernatorial race. That campaign brought Ronald Reagan to national prominence and gave the New Right movement a real boost. Broder’s notes, interviews and accounts of Reagan’s speeches and rallies during the campaign really provided new insight into what one could argue was the most salient political movement of the late 20th century.

Tell us about a memorable interaction with a Library user.
Honestly, I cannot think of one particular moment. But I can say that whenever I am able to help researchers discover collections that carry their scholarship further, I feel a certain sense of accomplishment. As someone who might have been described as a “hipster” in my younger days, finding that key document or documents that turn an argument for the better is as great as finding that obscure, ironic t-shirt from 1984 in a forgotten thrift-store pile of clothes.

What is one thing you would like to tell Library users about the Library?
The Library is so much more than you think it is. Until I worked here, I never realized what a resource it is for so many avenues of research: cartography, photography, prints, rare books, manuscripts, film, broadcasting and a great deal more. There really is something for everybody here.