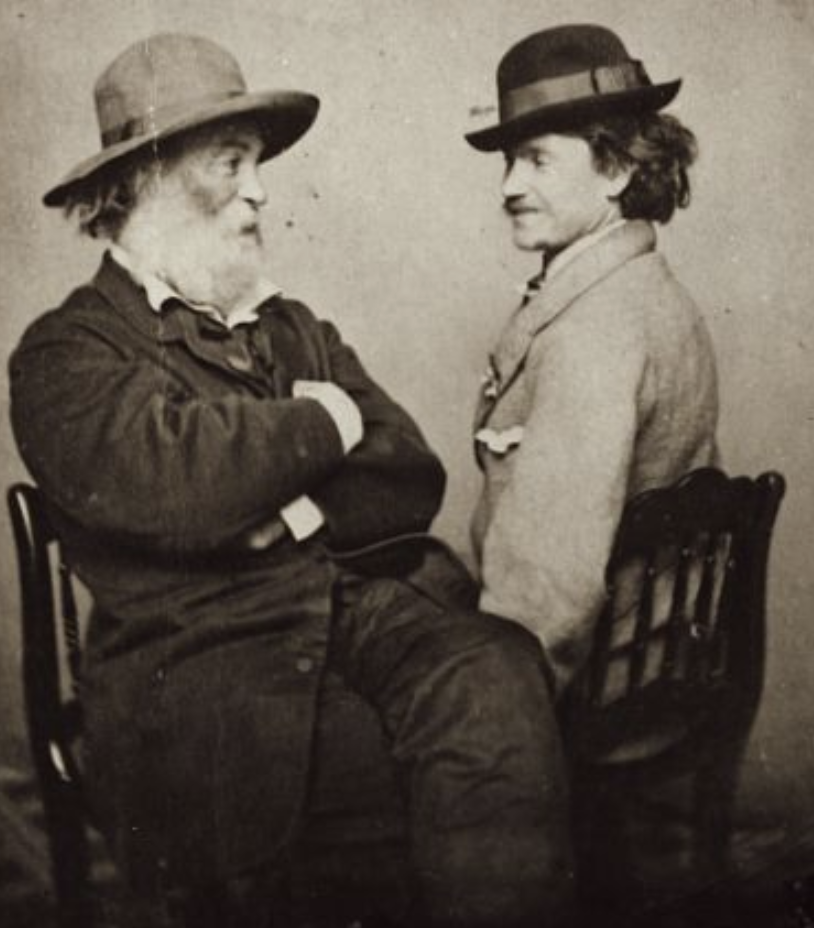 Walt Whitman, that most exuberant of poets, the 19th century bard of transcendent sensitivity, sensuousness and epic vision, was given to intimate correspondence in his personal life, too.

As the Library marks Whitman’s 200th birthday, it’s worth pausing over an affectionate letter he sent to Peter Doyle.

Doyle, a D.C. streetcar conductor, was some two decades Whitman’s junior, but the pair bonded one night in 1865 when Whitman stepped, alone, onto Doyle’s streetcar and sat beside him. Doyle later recalled that he put his hand on the older man’s knee and “we understood.” In August of 1870, the bearded poet wrote Doyle a letter, ending one section with:

“I believe that is all for to-night, as it is getting late, — Good night, Pete, — Good night my darling son —– here is a kiss for you, dear boy – on the paper here – a good long one.” Most charming is that the “o” in “one” is smudged. It is tempting to imagine Whitman giving the paper a playful wet smack before mailing, blurring the ink, though it is impossible to know.

The relationship was, in one way, critical to Whitman’s legacy as the poet who enshrined the national grief over President Lincoln’s death. The night Lincoln was assassinated, Whitman was in New York. Doyle? Sitting in Ford’s Theater, an eyewitness to the assassination.

“Whitman used that information in a lecture he often gave on the death of Abraham Lincoln,” says Barbara Bair, a historian in the Manuscript Division and lead curator of the Whitman Bicentennial exhibit. “He spoke as if he was the eyewitness. He didn’t say, ‘My dear one was there and told me.’ He gave the ‘Death of Lincoln’ speech many times, and people assumed he saw it.”

Whitman’s letter to Doyle, along with other rarely seen letters, manuscripts, rare books and personal belongings, will be on display in the Jefferson Building from May 16 to August 15, as part of the Library’s bicentennial celebration of Whitman’s birth. The Library’s Whitman collections of his works and belongings are the world’s largest. They include his spectacles, haversack, notebooks, correspondence, manuscripts, a surviving draft page from his famous poem “Song of Myself” and an original print edition his seminal work, “Leaves of Grass.” 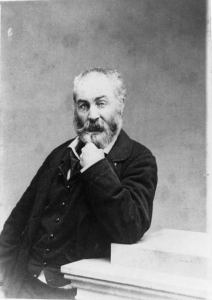 There’s lots to do. His writings are available for transcription in a By the People crowdsourcing project at any time. There’s a May 23 evening lecture and movie at the Packard Campus Theater in Culpepper, and a family-oriented birthday party in the Young Readers Center on June 1, featuring author Robert Burleigh, illustrator Sterling Hundley and their book, “O Captain, My Captain: Walt Whitman, Abraham Lincoln and the Civil War.” On June 3, an Open House in the Jefferson Building will showcase some of most rarely seen material in the Library’s collections.

Whitman’s writings, most particularly the many editions of his “Leaves of Grass,” described the growing nation and helped define the idea of it. He wrote of an earthy, sweaty, protean America, a continent and a people entwined in a shockingly beautiful cosmos that ran as the universe intended, far above the teachings of any one religion. The book was sensual, often sexual — and frequently condemned as obscene.

He was largely self-taught and never outgrew his affection for men and women who earned their wages by muscle, sweat and grit. “When he lived in In New York, he loved to ride with the streetcar drivers, the stevedores, the sailors, the ferry-boat pilots — those were his guys,” Bair says.

He wrote so many iconic lines that, over the course of time, they seemed to have seeped into the groundwater of America’s mythology of itself.

“I hear America singing, the varied carols I hear…”

“O Captain! My Captain! Our fateful trip is done…”

“I sing the body electric.”

“I am large, I contain multitudes.”

“I sound my barbaric yawp over the roofs of the world.”

He was the second of nine children, born to a Long Island carpenter on May 31, 1819. The family moved to Brooklyn when he was a child. At 12, he was a printer’s apprentice. At 23, he was the editor of a newspaper in New York. A tall, robust man who reveled in the natural world, heworked as a carpenter, printer, government clerk and, famously, as a volunteer at military hospitals in and around Washington during the Civil War. He later traveled by river and rail across much of the country, absorbing the landscape and people like a sponge. Though he opposed slavery, he was not immune from the racism and white supremacy of the era. 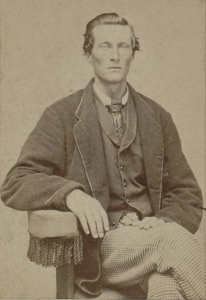 He kept pocket-sized notebooks of his own making for his work in the hospitals and camps. Ever the journalist, he jotted down injured soldiers’ names, addresses, wants and needs (oranges, wine), and their memories from the war. He often brought them treats. Betheul Smith, a fellow New Yorker, was one of those soldiers and became a friend and correspondent.

In another entry, under heading of “Virginia Idioms,” he lists “How’s all?” and “Where you been at?” It’s that ear for the unpolished talk of the common folk that he gave back to the nation in timeless poetry and why, 200 years later, he remains a towering figure.

Subscribe to the blog— it’s free! — and the largest library in world history will send one cool story to your inbox Monday-Friday