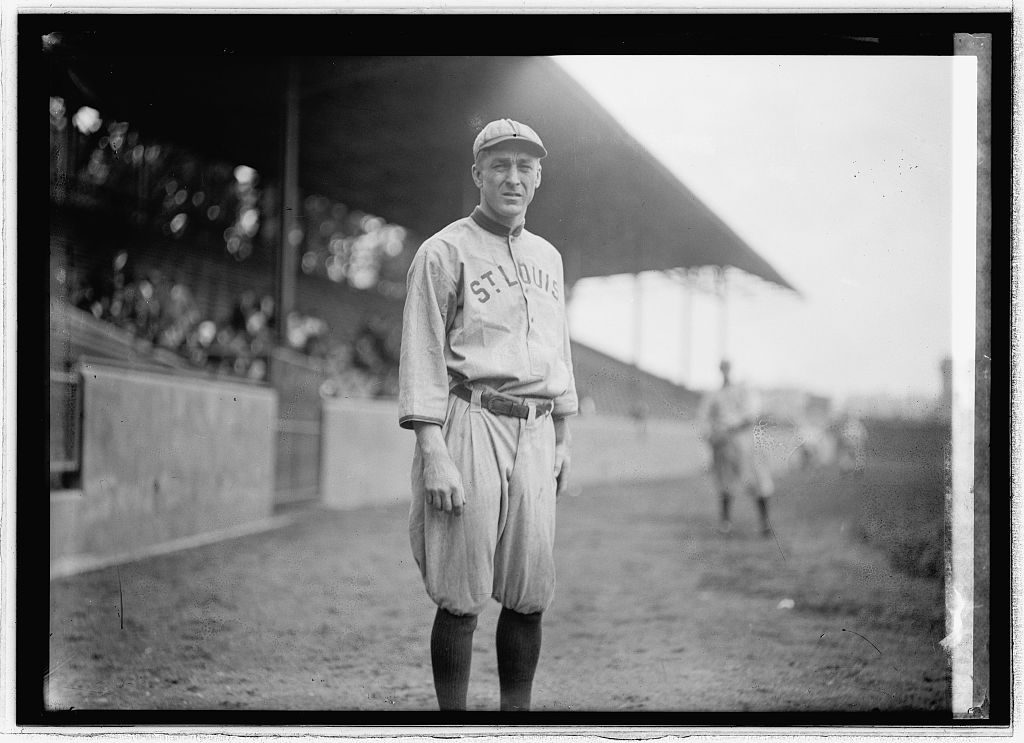 This is a guest post by Jeffrey Flannery, head of the Reference and Reader Services Section of the Manuscript Division.

Spring has arrived, which all fans know marks the beginning of the baseball season. Opening day was April 2 for major league baseball, and the new season brings hope that this year may be the year for the hometown nine. The traditions of baseball form an important part of the appeal of this unique sport, with the rich history of the game, filled with innumerable stories and statistics, keeping fans interested all year long.

No one encapsulates baseball’s history more than Branch Rickey (1881–1965), a former player and manager who became an innovative baseball executive and part owner.

In a career spanning nearly 60 years, Rickey is perhaps best known as the man responsible for bringing Jackie Robinson into major league baseball in 1947, thereby breaking baseball’s long-established color barrier. The Library of Congress Manuscript Division’s collection of Branch Rickey Papers offers a fascinating glimpse into the history of 20th-century baseball, viewed through the prism of this influential figure.

The Rickey Papers are extensive, including 29,000 items of correspondence, photographs, memoranda, speeches, scrapbooks, subject files and notes, arranged in 87 containers, as described in the collection’s finding aid and available for research use in the Manuscript Reading Room. 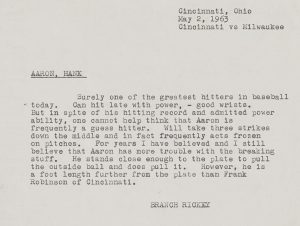 Perhaps the most intriguing part of the trove documenting Rickey’s extraordinary career are the scouting reports he compiled during the 1950s and 1960s. Long active as a player evaluator, by 1963 Rickey was in the sunset of his career and serving as a consultant for the St. Louis Cardinals. But the reports of this period still show him as an astute judge of talent and also reveal his unique appraisal style.

Rickey evaluated all players who crossed his path with an unsparing eye, be they rookie or veteran, and his reports are written in a strongly opinionated, succinct and often caustic style. Some reports resemble modern-day tweets in their brevity and make for provocative reading.

For example, he says of Henry Aaron, the greatest home-run hitter of the 20th century, “[I]n spite of his hitting record and admitted power ability, one cannot help think that Aaron is frequently a guess hitter.” Of Willie Mays, another Hall of Famer, Rickey wrote, “I would pitch a lot of slow stuff to Mays, particularly when he is anxious to hit. The slow curve ball he ‘slobbers’ all over the place.” 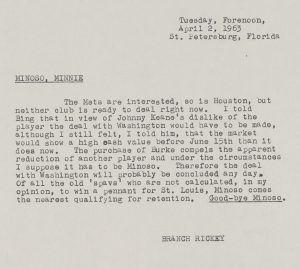 Of course, not every player Rickey evaluated was Hall of Fame material. Roy Majtyka was a minor league infielder for the Cardinals who later coached briefly in the major leagues before settling in as a minor league manager. He caught Rickey’s attention but was dismissed as “a puny hitter. Pretty good runner, pretty good fielder. A nice boy.” 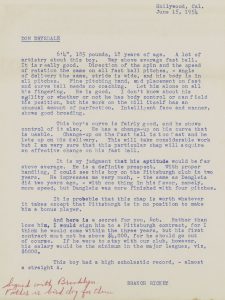 Some of Rickey’s reports are written in a jargon that requires knowledge of references beyond baseball. In April 1963, Rickey produced a report on aging Cuban star, Orestes “Minnie” Minoso, then with the Cardinals. After reluctantly admitting that the player would have to be traded before the season began, Rickey wrote, “[O]f all the old ‘spavs’ who are not calculated, in my opinion, to win a pennant for St. Louis, Minoso comes the nearest qualifying for retention. Good-bye Minoso.” A “spav” is a truncated reference to spavine, an arthritic condition found in racehorses.

Of course, Rickey did not always get his man. In 1954, then with the Pirates, Rickey scouted and sought to sign a young Don Drysdale, but Rickey’s old team, the Dodgers, beat him to it. In an annotation, Rickey noted “signed with Brooklyn, father is bird dog for them.” A “bird dog” was an unpaid scout.

Rickey’s career had a significant impact on baseball. Enshrined in the Hall of Fame in Cooperstown, Rickey’s contributions are a legacy to the game that endures to this day. 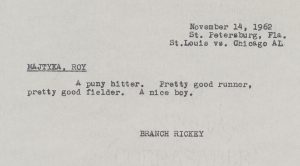