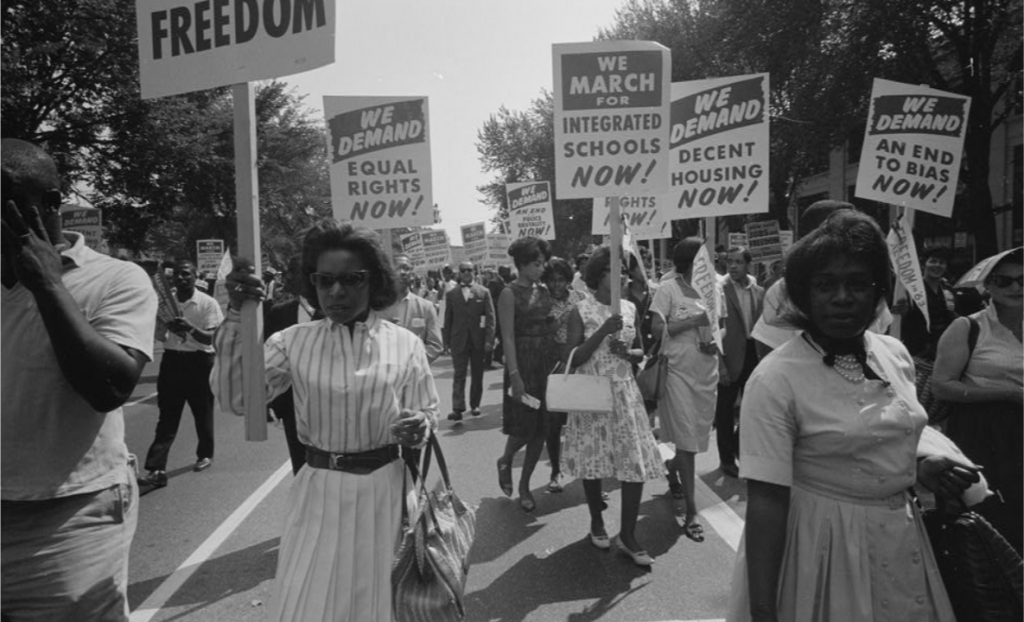 The 1963 March on Washington for Jobs and Freedom was one of the most significant protests in American history, bringing more than 250,000 marchers from across the nation to state an unforgettable claim for racial and economic equality. With its written-in-lightning keystone moment — Martin Luther King Jr.’s “I Have a Dream” speech — it helped galvanize a generation to fight for an end to nearly a century of Jim Crow segregation. 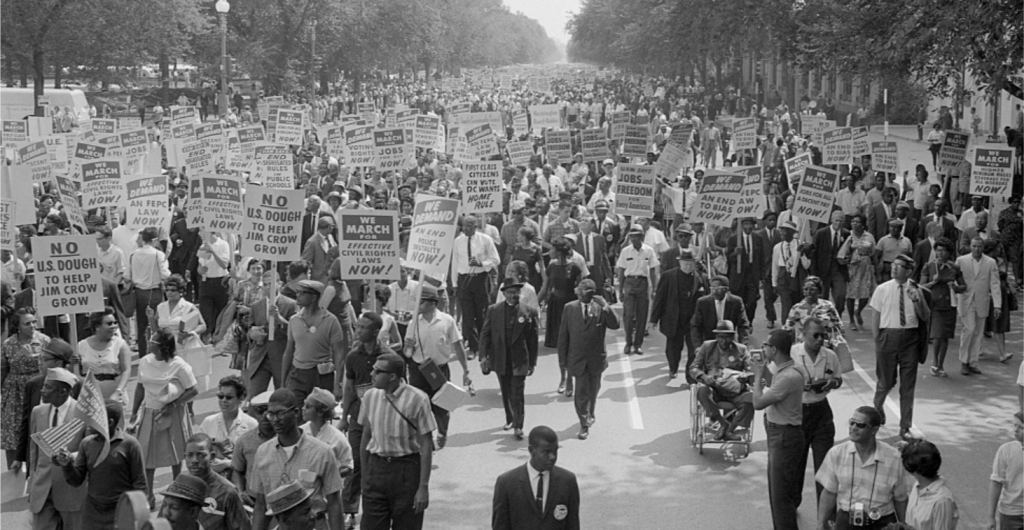 The march in full progress, including a man in a wheelchair. Photo: Warren K. Leffler. Prints and Photographs Division.

The Library holds thousands of items related to this historic moment — including the papers of the National Association for the Advancement of Colored People — including those that document the march itself. Many were featured in the A Day Like No Other: Commemorating the 50th Anniversary of the March on Washington exhibit in 2014 and can be seen online in our Changemakers project. You can find more in the Civil Rights History Project.

The march took place on Aug. 28, a little more than two months after NAACP leader Medgar Evers was assassinated in Mississippi and three months before President John F. Kennedy was assassinated in Texas. After years of racist violence across the country, it brought together a multi-racial coalition of races, faiths and professions that, by its sheer weight and cross-section of society, made it the most significant protest for social justice in the nation’s history. 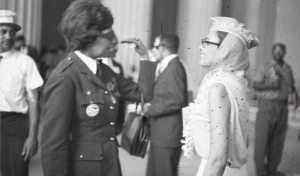 The Kennedy administration, though supportive of the civil rights cause, was unnerved by the prospect of so many black protesters coming to the city. Violence was widely expected by the city and federal government. Thousands of National Guard troops were brought in to assist police in case of rioting (there was none). Several flights that day were canceled because of bomb threats. The speech of a young John Lewis was toned down for being too inflammatory. Author James Baldwin was barred from speaking entirely for the same concerns. Malcolm X, who did not attend, derided all the compromises made by organizers, dubbing the day as the “farce on Washington.” 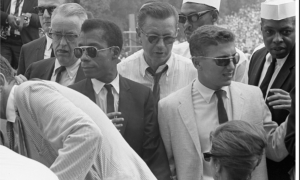 Author James Baldwin attended the march but was not allowed to speak for fears he would be too inflammatory. Photo: Roosevelt Carter. Prints and Photographs Division.

Still, the comprehensive civil rights bill called for by protesters demanded the government put an “end to segregation in public accommodations, decent housing, integrated education and the right to vote” among other things. In 1963, with Jim Crow segregation, poll taxes, red-lined neighborhoods, miscegenation laws and blatant black voter disenfranchisement ruling life in the Deep South — and in many other places across the rest of the nation — these were heady goals, not realities.

The day began with a group of organizers meeting with members of Congress to officially present these demands. It ended with King, Randolph, Lewis, and other leaders meeting with President Kennedy and Vice President Lyndon B. Johnson at the White House. In between was the march and the speeches at the Lincoln Memorial that are now so much part of the national memory. The march itself was from the Washington Monument west primarily along Constitution Avenue to the Lincoln Memorial for the mass assembly. There, Mahalia Jackson and Marian Anderson sang gospel hymns. Joan Baez and Bob Dylan sang protest songs. Speeches flowed. The day was sunny, with the temperatures in the low 80s — not bad for Washington in August — but the vast crowds made it feel much hotter.

“I am happy to join with you today in what will go down in history as the greatest demonstration for freedom in the history of our nation,” King told the crowd, beginning his defining speech.

Despite the worries of government officials about violence, only three arrests were made on the day, the Associated Press reported. Police Chief Robert V. Murray told reporters it had been a “very orderly demonstration.” By 11 p.m., the A.P. reported, Union Station and the city’s two bus stations were all but empty, and the areas around the Washington Monument and the Lincoln Memorial were “virtually deserted.”

The photographs in the Library’s collections portray the entire day of the march from multiple viewpoints as experienced by independent photographers and photojournalists. 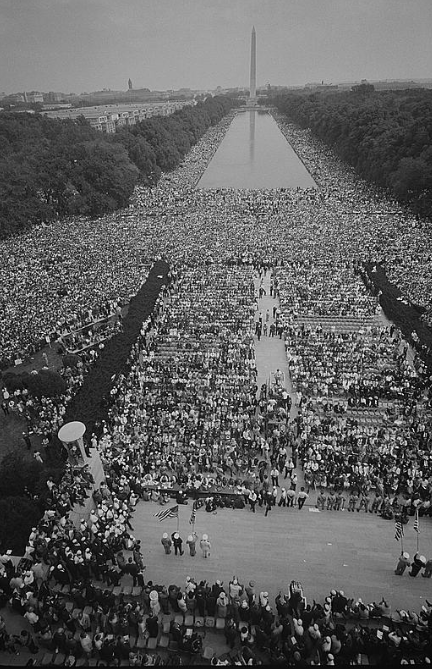 The work of these photographers reveals memorable faces and singular moments, including images selected for publication long after the event to represent the purpose, spirit, and impact of the march. Press photographs provide a chronological overview of the story from the initial organizing efforts in New York City in July until the demonstrators disbursed after the speeches at the Lincoln Memorial.

It was a emotional day for a turbulent decade ahead. Less than three weeks later, the Ku Klux Klan bombed the 16th Street Baptist Church in Birmingham, killing four schoolgirls. Kennedy would not survive the year; King, Malcolm X, Robert Kennedy and many civil rights workers would not survive the decade. Things that hadn’t happened yet: Freedom Summer, Selma, the passages of the Civil Rights Act and the Voting Rights Act, and a Supreme Court case that finally enforced the Brown v Board of Education desegregation decision.

Still, to this day, as new protests for some of the same issues fill the nation’s streets, it is difficult to imagine the nation’s history without the March on Washington. 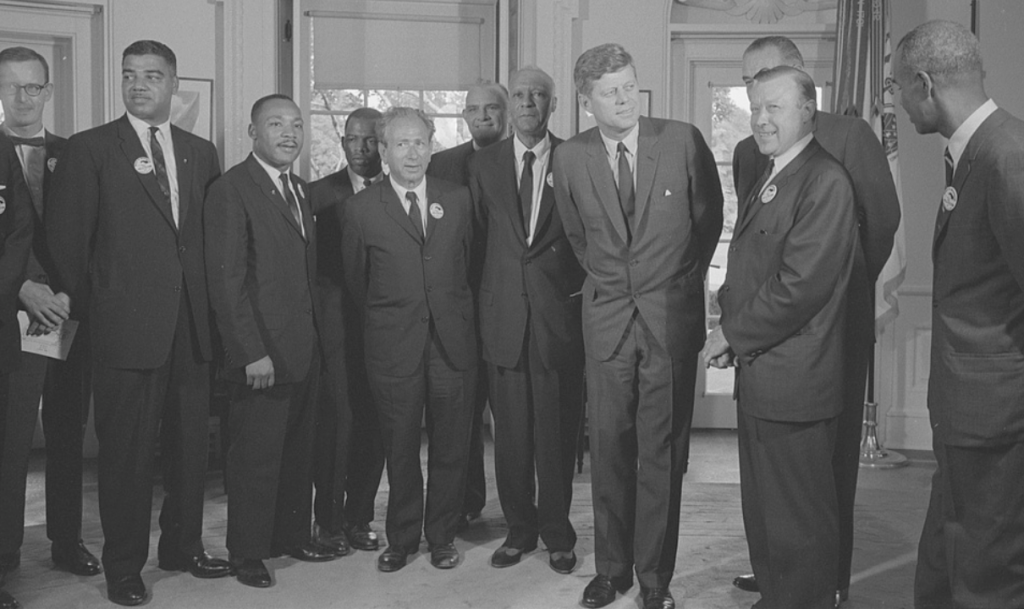 Portions of this story first appeared in the Library’s 2014 exhibit, A Day Like No Other: Commemorating the 50th Anniversary of the March on Washington.