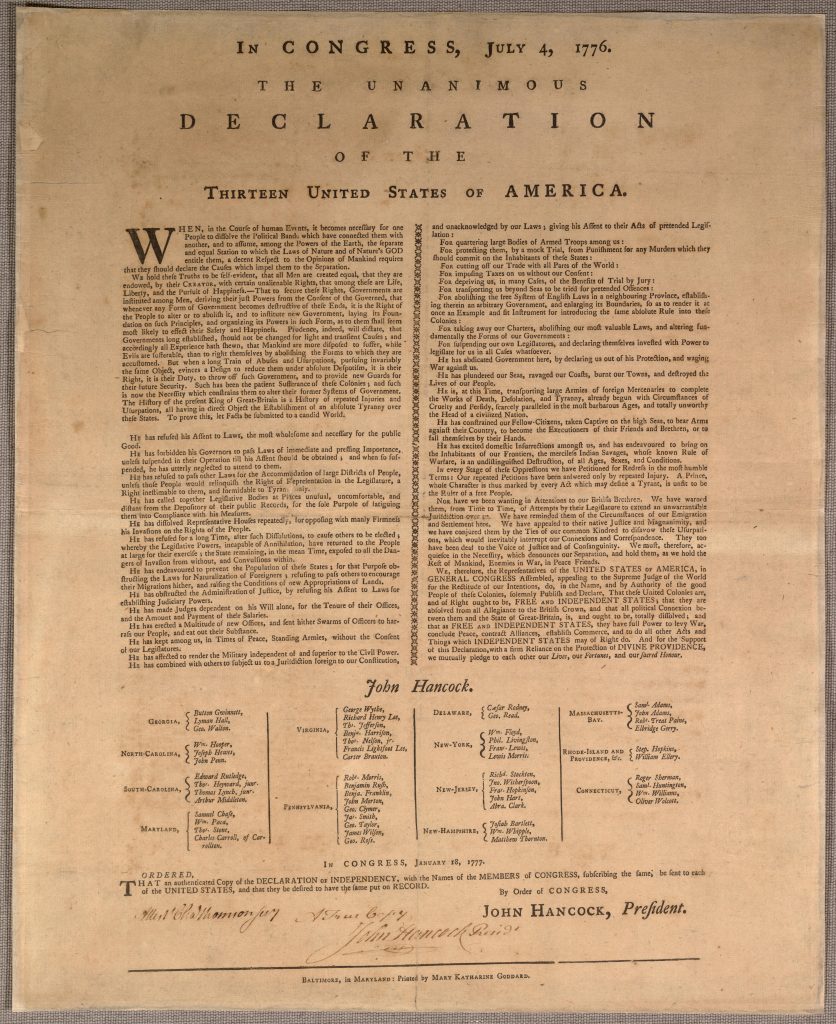 The Declaration of Independence, printed in Baltimore by Mary Katherine Goddard.

Mary Katherine Goddard (1738–1816) lived during remarkable times in early American history, and she did not sit idly by observing events. Instead, this brave and industrious woman actively took part in helping to found a new republic through use of her printing press. She may not be a household name, but one item she printed is: an early edition of the Declaration of Independence, the first with all the names of the signers on the document. March is Women’s History Month, and what more deserving woman to laud than Goddard?

She was born in Connecticut to Giles Goddard, a postmaster, printer and publisher. He passed his skills on to all his family members, including his wife, Sarah, and their two children, Mary Katherine and William. It is interesting that Goddard taught both his wife and his daughter the trade, as normally women were expected to keep home and raise children. He was a well-educated man, and it is likely that he was forward-thinking.

But women postmasters were not unheard of in the colonial era—there were no laws on the books preventing them from assuming the position. With a relatively low population, the colonies needed people with printing and publishing skills, whether they were practiced by men or women.

In an entrepreneurial spirit, William Goddard went to Philadelphia and then to Baltimore, where he founded printing businesses as well as newspapers. He eventually left Baltimore for other ventures, leaving all of his business in the hands of his sister.

By this time, Mary Katherine already had a decade of experience with printing and publishing. In 1775, she took over the Maryland Journal and proudly printed, “Published by M.K. Goddard” on the masthead of one of the very few publications coming out of Maryland. She ran the newspaper on her own for a full decade, from 1775 to 1785, and also printed a variety of broadsides, pamphlets and almanacs while serving as the postmaster. Energetic, industrious and adept, Goddard gained the broad respect of her fellow countrymen.

These accomplishments are enough on their own to identify Goddard as an admirable woman of substance, but what came off her printing press is truly amazing. She was nothing less than a revolutionary herself, as she dared to openly defy her government by printing the Declaration of Independence. Her name was clearly printed on a document designed to overthrow British rule.

Goddard took a stand, and it must have given her a sense of exhilaration as well as danger. What an amazing life she led, likely meeting up with a number of the nation’s founding fathers as she joined them in their efforts to overthrow tyranny. No one was certain of victory, and all involved took a chance on being charged with treason.

The first edition of the Declaration, referred to as the Dunlap Declaration of Independence was printed in Philadelphia on the night of July 4, 1776, by the young Irish immigrant John Dunlap. In haste, it was quickly distributed the next day throughout the 13 states. The Rare Book and Special Collections Division holds this valuable edition in its Printed Ephemera Collection.

Upon receiving word from the Second Continental Congress to print and widely distribute the Declaration, Goddard set to work in 1777, printing her copy with the added typeset names of the signatories, including John Hancock. Hers was the first copy to bear all of the signers’ names. The Rare Book and Special Collections Division holds two copies of the Goddard Broadside, which are clearly marked at the bottom, Baltimore, Maryland: Printed by Mary Katherine Goddard.

The Goddard Broadside is part of the fully digitized Documents from the Continental Congress and the Constitutional Convention, 1774–1789. In total, this collection contains 277 documents relating to the work of Congress and the drafting and ratification of the Constitution. A number of the documents contain handwritten annotations by the founders of our country, making them primary resources that are completely unique and offering valuable insights into the minds of the founders of our country.

We welcome and encourage all to use this collection of legacy documents. I am sure that Mary Katherine Goddard would be quite pleased to know that, to this day, her work is still being distributed and made available throughout this land and beyond.