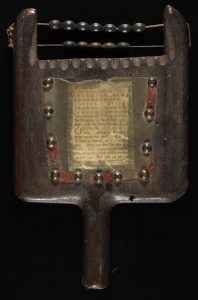 September is traditionally known as the month that all children return to school after summer vacation. To mark this tradition, the Rare Book and Special Collection Division’s book(s) of the month are two hornbooks: a wood hornbook and an ivory hornbook.

Today’s children would likely see these rare objects as curious. But they were a commonplace teaching tool starting from as far back as 1450 and used through the late 19th century. The hornbook originated in England and served the function of teaching children to read, learn math or to receive religious instruction. Hornbooks are somewhat like the more modern idea of a primer. See “The New England Primer” in Books that Shaped America for a good example of what a primer looks like.

Hornbooks were used well into the era of mass printing primarily because they were very functional as well as physically durable. Most all had a handle of some sort and were made of wood, bone, ivory, leather, stone or even, in more modern times, cardboard. They ranged from plain and functional to quite elaborate with decorations and aesthetically pleasing letter engraving. 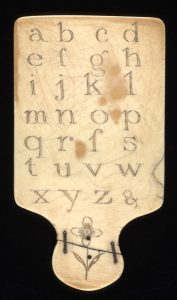 Born of ingenuity and resourcefulness, hornbooks actually used horn fashioned into a transparent sheet to cover and protect the lessons engraved on the hornbook. This was achieved by leaving the horn in cold water for several weeks, causing it to separate into distinct parts. The needed part was then heated and pressed to make it smooth and transparent. Quite commonly, hornbooks taught the alphabet with capital and lower-case letters, followed by vowels and consonants in their combinations. Another common instruction in hornbooks was The Lord’s Prayer and various numbering systems.

The 18th-century wood hornbook featured in this post is possibly American. Very functional and durable, it includes the alphabet in lower and upper cases, followed by vowels, ligatures and the Lord’s Prayer. Also included at the top is a two-line abacus with 12 wooden beads. This hornbook is a good example of the use of translucent horn, which is tacked to the wood.

The ivory hornbook was made in England sometime during the 18th century, with the alphabet in upper and lower case engraved on ivory. This is a good example of an aesthetically pleasing item that may have been intended for a well-to-do learner. It is possible that this hornbook was used often, as it received visible repairs to mend the handle, which had broken off from the body.

Children may now use computers or other advanced methods of instruction, but these old-fashioned items still are quite functional and could easily impart lessons to young children today.