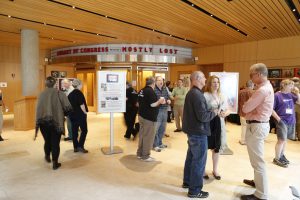 This is a guest post by Mark Hartsell, editor of LCM, the Library of Congress Magazine. The post is reprinted from the January/February issue of LCM, available in its entirety online.

At any other theater, they would be the world’s most annoying moviegoers — the last people with whom you’d want to spend a few hours in a confined space.

They talk endlessly among themselves as the film plays. They shout to acquaintances across the theater. They talk back to the screen. They forever check their phones and furiously type away on laptops.

This behavior, frowned upon anywhere else, is not only tolerated here at the Packard Campus theater but, for one week each June, is explicitly encouraged.

“Please talk loudly. Please bring out your laptops or iPads,” patrons are instructed just before the lights dim and the film rolls — the cinema equivalent of an airline steward ordering passengers to recline their seats, lower their tray tables, turn on all electronic devices and walk about the cabin during takeoff.

All that distraction would make for a nightmarish night at most theaters. But for the Library of Congress, it represents something productive and important: an effective, if noisy, way to preserve film history.

Each June, the Library’s Packard Campus for Audio-Visual Conservation in Culpeper, Virginia, holds Mostly Lost, a workshop that enlists cinema experts and movie buffs from around the country to help identify silent films whose titles have been lost to history. 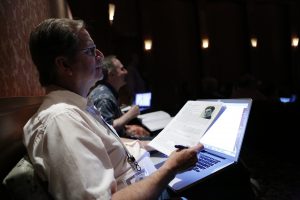 Workshop participants use laptops to find information to help them identify the film they’re watching on screen. Photo by Shawn Miller.

The four-day workshop taps, in real time, the collective brainpower of the historians, archivists and fans in the seats: As films roll, they shout out clues they see onscreen that might help identify the film and search online databases for titles that match the clues.

Out of the chaos, a more complete understanding of silent film emerges: Since their inception seven years ago, the workshops have identified 403 films — just over half the number screened.

“Before each workshop, we preview the films submitted and often are able to identify a film prior to the workshop, so that submission doesn’t make the final cut onto the workshop program,” said Rob Stone, who, along with Rachel Del Gaudio, organizes the event. “We try not to include any easy ones at the workshop, we want our Mostly Lost attendees to really work, and our high percentage of identifications show that they do just that.”

Moviemakers released some 11,000 silent feature films in the U.S. during cinema’s first few decades. According to a 2013 Library of Congress study, about 70 percent of them no longer exist, and many that survived did so in an incomplete form.

Today, international archives collectively hold thousands of reels that — whether through neglect, human error or the ravages of time — no longer bear the markings that would reveal the identities of the films they contain.

In cinema’s early years, distributors provided films to theaters and didn’t require them to be returned. After a movie’s run ended, the projectionist might keep the whole film, throw it out or just save a few favorite bits. 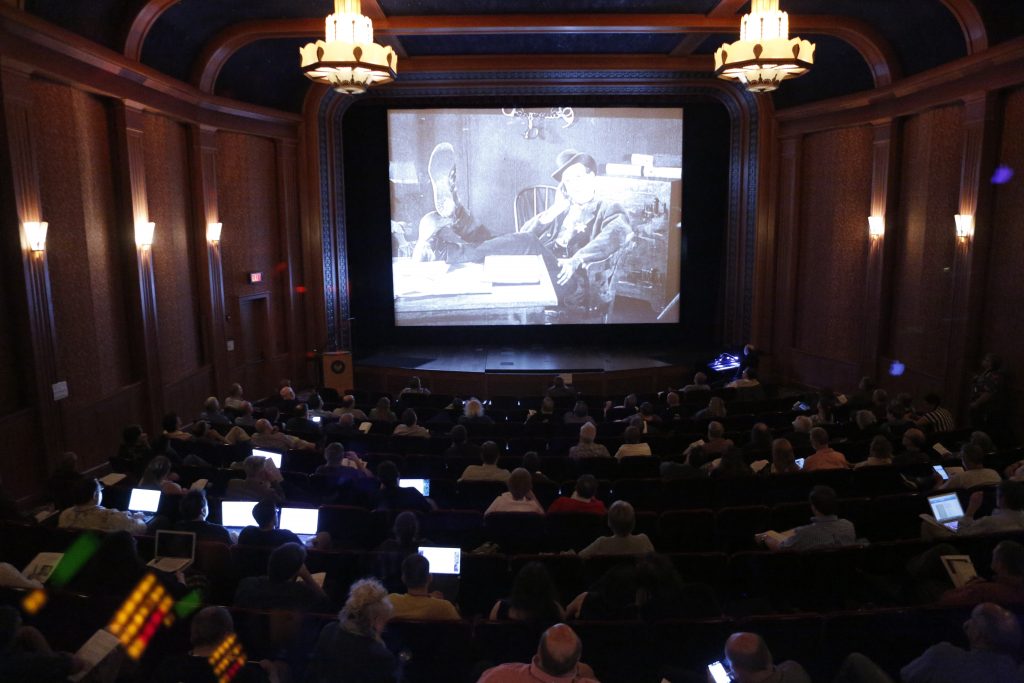 A silent film is screened during a Mostly Lost workshop. Photo by Shawn Miller.

Or, some reels from a multireel feature might get misplaced over the decades, leaving, say, only one title-less reel behind. In other cases, a film might deteriorate and the degraded sections get cut out, leaving a partial film with no opening title and credits.

Are these works masterpieces? Lost classics? Without doing some film archaeology, those questions would go unanswered.

The purpose of Mostly Lost is to uncover as much information about each film as possible and identify its proper title. Nothing is known about some of the films screened. About others, archivists know a little — the name of an actor, perhaps, or the production company.

The films ranged in date from about 1900 to the 1960s, in length from about five seconds to nearly 25 minutes and in subject from westerns to slapstick to travelogue to animated clowns banding together to defend Earth from a Martian invasion.

Clues found onscreen help attendees identify unknown films or at least add to the knowledge about them. The typeface used in an intertitle helped date a silent film to the early 1920s. Recognizing a car as a Studebaker President Roadster and an actor as George LeMaire resulted in the identification of one film as the 1929 short “The Salesman.”

At the workshops, questions are raised (“Is that Andy Devine?” “NO!!”), observations offered (“The furniture looks French, but the acting doesn’t”) and jokes made (“The car is a ’39 Mercury, but what year is the fish?” someone quips during a 1940s fishing travelogue.)

After the workshop ends, the work continues. For weeks afterward, the screening notes are researched in databases such as the American Film Institute, the British Film Institute and the Complete Index to World Film, resulting in more identifications.

The workshops, it’s hoped, will not only restore long-lost information about these films but also restore the films themselves to public consciousness.

“I am constantly surprised by the knowledge and research skills of the Mostly Lost attendees,” Del Gaudio said. “They have been able to identify films that I thought would remain unknown forever. Films that seemingly have no visual clues still elicit responses from someone who recognizes that location or are familiar with that particular story. I receive emails years after the fact from attendees who come across helpful information that they want to impart in case it helps to identify a film. It is wonderful.”