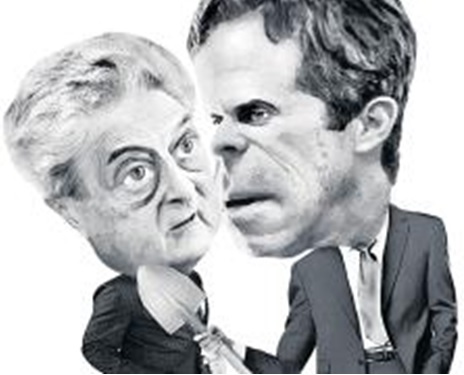 Companies controlled by Israeli mining magnate Beny Steinmetz sued fellow billionaire George Soros, claiming he cost them at least $10 billion through a defamation campaign that stripped them of rights to an iron ore deposit in Guinea and other business opportunities around the world.

After years of BSGR accusing Soros of propagating corruption allegations which resulted in its loss of Simandou, this is the first time it took direct legal action against him. In the complaint, BSGR alleges that Soros was driven by a grudge dating back to 1998 around a business in Russia and his alleged hostility towards Israel.

“To Soros, Steinmetz’s success, as well as his active, passionate promotion of Israeli life, business and culture are anathema,” BSGR said in the complaint. “Soros is also well known for his long-standing animus toward the state of Israel.”

Soros’s spokesman Michael Vachon didn’t immediately respond to an email or messages left on his work and mobile phone outside of regular business hours.

Simandou, hailed by mining companies as the richest untapped iron ore site in the world, has also been the subject of numerous court fights. Rio Tinto Group sued Steinmetz, accusing him and BSGR of conspiring with Vale SA to steal the rights to the deposit. That lawsuit was thrown out in 2015 by a federal judge in New York. BSGR lawyers demanded billions of dollars in damages from Rio Tinto in December after Rio announced that it had informed law enforcement agencies of a $10.5 million consultancy payment to a friend of Guinea’s president.

Steinmetz has also been investigated and questioned by Swiss and Israeli law enforcement officials on suspicions that he paid bribes to help his company win a stake in Simandou. No charges have been laid.

Steinmetz and BSGR originally lost their rights to Simandou, because the Guinean government found that they obtained the permits after paying millions in bribes, including to Mamadie Toure, the fourth wife of Guinea’s former president.

The government’s decision was based on fabricated reports by Soros-funded companies, BSGR said in the complaint. Toure, who implicated BSGR and Steinmetz, received $50,000 from an adviser to President Alpha Conde and $80,000 from an “agent or affiliate of Soros,” according to the complaint.

A spokesman for Conde didn’t answer calls outside of regular office hours. Toure couldn’t be immediately reached for comment.
BSGR said its case is supported by an email from a senior Soros investment executive in New York relating to Guinea’s interactions with BSGR around their mining contract and information from witnesses that Soros had personally demanded BSGR be pushed off Simandou.

“Soros’s financial clout gave him power over Guinea’s processes of government, which he then thoroughly abused,” BSGR said in the complaint. Soros was “motivated solely by malice, as there was no economic interest he had in Guinea,” the company said.