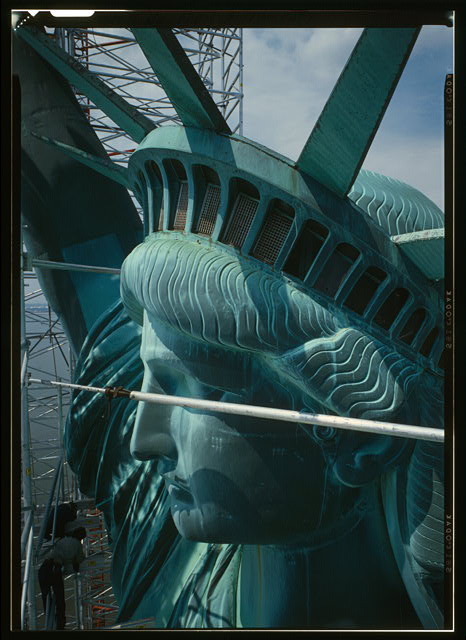 Profile view of the left side of the Statue of Liberty’s head. Photo by Jet Lowe for the Historic American Engineering Record.

The Statue of Liberty arrived at its permanent home on Bedloe’s Island in New York Harbor at 1 p.m. on June 19, 1885, “snugly packed in the hold of the French transport Isère,” according to a New York Times report the following day. Multiple delegations of dignitaries, 20,000 citizens, and “every species of craft known to the sea” was out on the water to greet the Isère, so that the “water was gay with color for miles around.”

It would take another 16 months to erect the 151-foot-tall copper and iron statue, a gift from the people of France to the people of America—it had to be broken down into 350 separate pieces and packed into 214 crates for transport across the Atlantic. 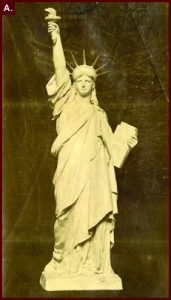 A photo of Bartholdi’s final study model, which he submitted with his application for copyright registration in 1876.

But as reflected in the collections of the Library, its fame preceded its completion—President Grover Cleveland formally accepted the finished statue on October 28, 1886—and it lasted long afterward. Even today, advertisements and other creative works continue to draw inspiration from the famous emblem of freedom and democracy.

Frédéric Auguste Bartholdi, the statue’s designer, submitted a photo of his final study model of the statue when he applied for copyright registration in 1876, America’s centennial year—the statue commemorates the centennial of the American Declaration of Independence. Six years before Bartholdi’s application, Congress centralized the U.S. copyright registration and deposit system at the Library. “The Statue of American Independence” as the Statue of Liberty was first named, was registered on August 31, 1876.

In the decade before the statue’s assembly, newspapers and magazines popularized images of it, and memorabilia proliferated. Advertisers of everything from patent medicine to light bulbs also capitalized on—and expanded—the statue’s celebrity. 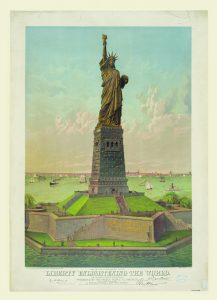 An ad is imprinted on the statue’s base in this lithograph registered for copyright protection in 1884 by New York publisher Root and Tinker. 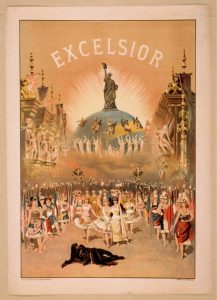 A theatrical advertising poster copyrighted in 1883 by Imre and Bolossy Kiralfy, producers of burlesques.

New York publisher Root and Tinker, for example, registered a color lithograph of the statue in 1883, thought to have been commissioned to raise funds to build the statue’s giant pedestal, designed by architect Richard Morris Hunt. The next year, the publisher registered a reissue of the same lithograph with “Low’s Jersey Lily for the Handkerchief” imprinted on the statue’s base. The statue’s image appears in many such ads, including posters for theatrical productions.

Following installation of the statue, it continued to captivate the popular imagination as documented by an 1897 burlesque-show advertisement, a period railway travel poster, and even an 1898 motion picture by Thomas Edison’s firm.

By World War I, the Statue of Liberty was firmly established as an American icon. Its image was used to sell war bonds and to encourage young men to enlist in the military, and sheet music publishers incorporated it on cover illustrations.

More recently, the Historic American Engineering Record documented the Statue of Liberty in great detail. More than 450 images from the project are accessible on the Library’s website. 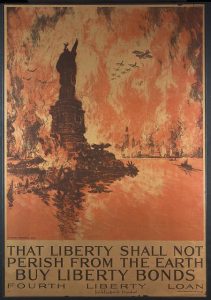 A 1918 poster by Joseph Pennell promoting the sale of bonds to support U.S. efforts in World War I. 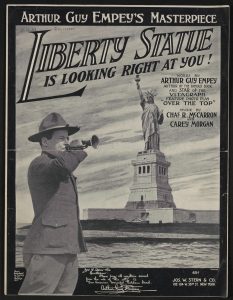 Cover for sheet music titled “Liberty Statue Is Looking Right at You,” published in 1918.