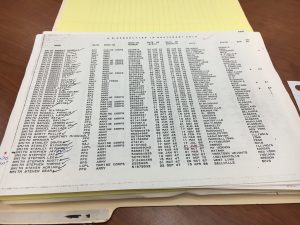 This is a guest post by Lee Ann Potter, director of educational outreach.

Thirty-five years ago this month, the Vietnam Veterans Memorial on the National Mall in Washington, D.C., was dedicated. Three years later, in 1985, the Vietnam Veterans Memorial Fund donated its records to the Library of Congress. But the National Archives actually plays a very important role in them—a role I was not aware of until I prepared a program this month for a group of high school students and their teachers.

I started by doing some research in the records, mostly to get a sense of their composition and arrangement in order to describe them to the students. I had scanned the finding aid and asked for six different boxes to be pulled. One that caught my eye was titled simply “spelling verification.”

A page listing the names of service members who lost their lives in Southeast Asia.

I suspected the files in that particular box would have something to do with how the spelling of the thousands of names to be engraved on the memorial wall would be checked for accuracy. I was right. The box contained a sobering collection of printed and hand-written names of America’s fallen soldiers, sailors and airmen and women. Page after page contained checkmarks or corrections in red ink.

The box also contained a few pieces of correspondence related to the importance of accuracy. One letter, written by Robert Doubek, the memorial’s project director, to Major Gary Allord, the head of the Casualty Section of the U.S. Marine Corps explained:

As you know, a major element of the memorial design is the inscription of the names of all 57,709 Americans who died and/or remain unaccounted for. The VVMF [Vietnam Veterans Memorial Fund] has been supplied with a list of these names by the Office of the Assistant Secretary of Defense, which assures us that it is inclusive and accurate. Nevertheless, because the names will be inscribed in granite forever, and because a man’s name is sacred to his memory and family, we perceive a responsibility to independently verify to the best of our ability, that our list is complete and accurate as possible. 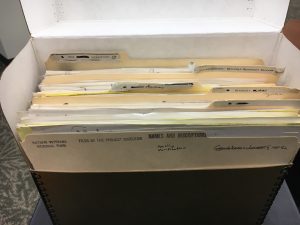 Another letter from Doubek read in part:

Paul, your agreement to undertake this task is a substantial realization of our responsibility to insure that the name of a man or woman who died in Vietnam is as accurate as we can make it before inscribing it for history. I of course know that the actual checking process will be a tedious one for those who actually do the work, and I would hope that you can impress on them also the historical significance of what they are doing.”

The “Paul” mentioned in this note of appreciation was Paul D. Gray, the assistant director for military records at the National Personnel Records Center in St. Louis. In all capital letters, another page in the file read “EMPLOYEES WITH SIGNIFICANT INVOLVEMENT IN VIETNAM VETERANS MEMORIAL PROJECT.” It then listed all the names of the National Archives employees who did the historically significant work. In addition to Gray, they included:

As we commemorate the memorial’s anniversary this month, we will remember and honor the sacrifices of those whose names are inscribed on the wall. Let’s also appreciate the efforts of these National Archives employees who made sure the names were accurate, the staff of the Vietnam Veterans Memorial Fund who saved the records and colleagues at the Library of Congress who preserve and make the records available for researchers today and for future generations.