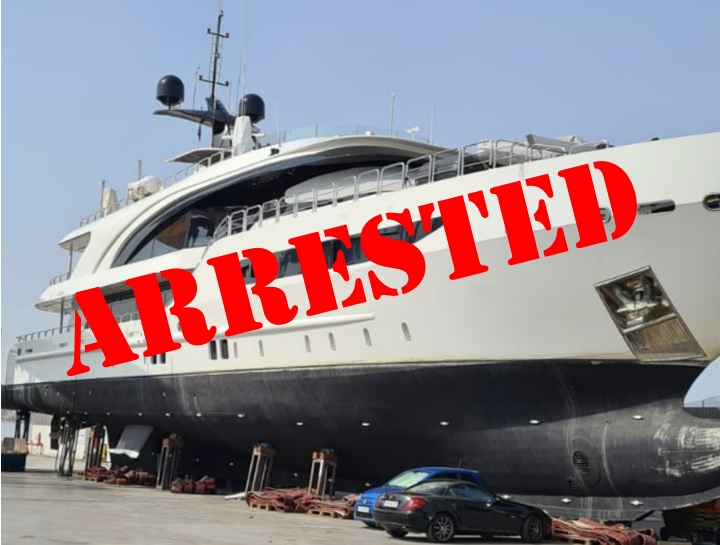 “MOKA” the personal yacht of Mofid Karameh has been arrested yet again, followed by terrorist threats in demand for its release.

In follow-up to our reporting of a few weeks ago (https://globalfraudwatch.org/nidal-chazi-karameh-suspicious-behavior-and-suspicious-yachts/) the mega-yacht MOKA owned by the dark character Nidal Chazi (Mofid) Karameh the Nigerian of Syrian descent and a purchased Lebanese citizenship and passport, has been arrested and seized by Greek officials in Perama.

MOKA as we reported was previously arrested in 2020 for non-payment of delivered goods and services. This time it appears that similar charges have been brought against the vessel. The current seizure is based on financial claims of ReFit Yachts, Ltd. a subsidiary company of Royalton Investment, Ltd. The same Royalton Investment that owns Konig Srl that has arrested and in custody, Karameh’s 127m ship P430 in Italy.

Ship/Yacht arrest are not that uncommon today, particularly in the case of Karameh, whose every yacht or ship that he has owned has been taken away from him, and a couple more than once. But what is unique are the terrorist militiamen dispatched to intimidate, influence, and threaten a family member of a Royalton Executive.

It has been reported that three individuals with professed Hezbollah ties threatened physical harm and to make “disappear” this Royalton family member, “if the yacht of Mofid is not released immediately.”

Royalton has refused to release the seized yachts and instead reported the threats and conspiracy to kidnap an American citizen to U.S. Federal officials. It has been reported that the Hostage Recovery Fusion Cell, a special task force made up of U.S. State & Treasury Department, along with the FBI and CIA would investigate such offenses. Penalties for such offenses include Sanctions, Fines, and imprisonment of up to 20 years.