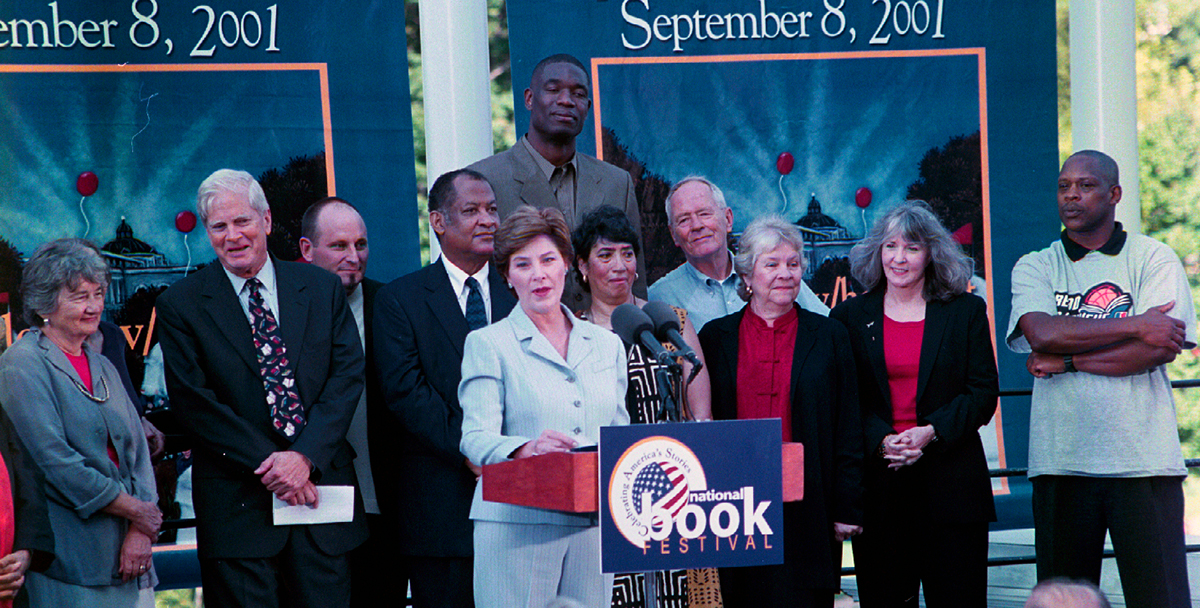 This was before the Festival was a vast tent city on the National Mall (2002-2013) or a huge, expo-style event in the Washington Convention Center (2014-2019) – and certainly before it was the virtual event that we’ve seen in the past two years, compelled by the COVID pandemic. Back then, it was a totally new idea, envisioned by first lady Laura Bush, who founded the Texas Book Festival when she was first lady of that state. She suggested a national festival to then-Librarian of Congress James Billington at a reception at the Library the night before George W. Bush was to inaugurated as 43th U.S. president in a ceremony to be held just across the street.

A national book festival was a big idea and would be a big undertaking. We didn’t even have social media to talk about it back then. We advertised this new Festival the old-fashioned way: newspaper ads, announcements to TV, radio and other media, and good old word-of-mouth. Working as part the team responsible for publicity, I was frankly a little anxious as we approached our starting time. Would people show up?

Boy, did they ever. Thousands were on hand as Dr. Billington and Mrs. Bush formally opened the Festival at 9:30 a.m. (She went on to serve as the National Book Festival’s honorary chair through 2008.) “We’ve come together to revel in the joy of the written word,” she said to a big, cheerful crowd.

What a day it was! Some 30,000 book lovers of all ages crowded the halls of the Library’s Capitol Hill buildings and tents set up on the lawn of the U.S. Capitol to hear 60 of their favorite authors, visit with players from the NBA, listen to Library curators and hang out with Clifford the Big Red Dog. Writers signed books and posters, answered questions, and bumped elbows with their fans.

Streets around the Capitol and the Library were cordoned off, and it all felt like a small-town fair. I remember being on the plaza outside the James Madison Memorial Building, which had become a makeshift open-air dining area with a few food trucks. There I was, munching on a hot dog, when Mrs. Bush strolled by, casually checking in to chat with surprised festival-goers and enjoying the day just about as much as anyone.

Here’s a story from our Library of Congress Information Bulletin with more details about our first Festival. And here is a selection of author talks from that day.

Three days later, on September 11, 2001, terrorist attacks changed the world – and the Capitol Hill campus of the Library of Congress was not immune to those changes. Since that sunny, happy day, there have been lots of changes in the way we get around in Washington and on the Library’s campus, as well as changes to the National Book Festival through the years.

But none of these changes have kept the Library and our Festival sponsors from celebrating books, authors, poets and the love of reading with a nationwide audience every year. It’s been my great joy to have worked on every National Book Festival since it started. I may be biased, but I think this year’s will be the best one yet.

Author Liz Carpenter, who was Lady Bird Johnson’s press secretary and chief of staff during the Johnson administration, captivated a crowd in one of the author tents set up on the lawn of the U.S. Capitol. Photo by Christina Tyler Wenks