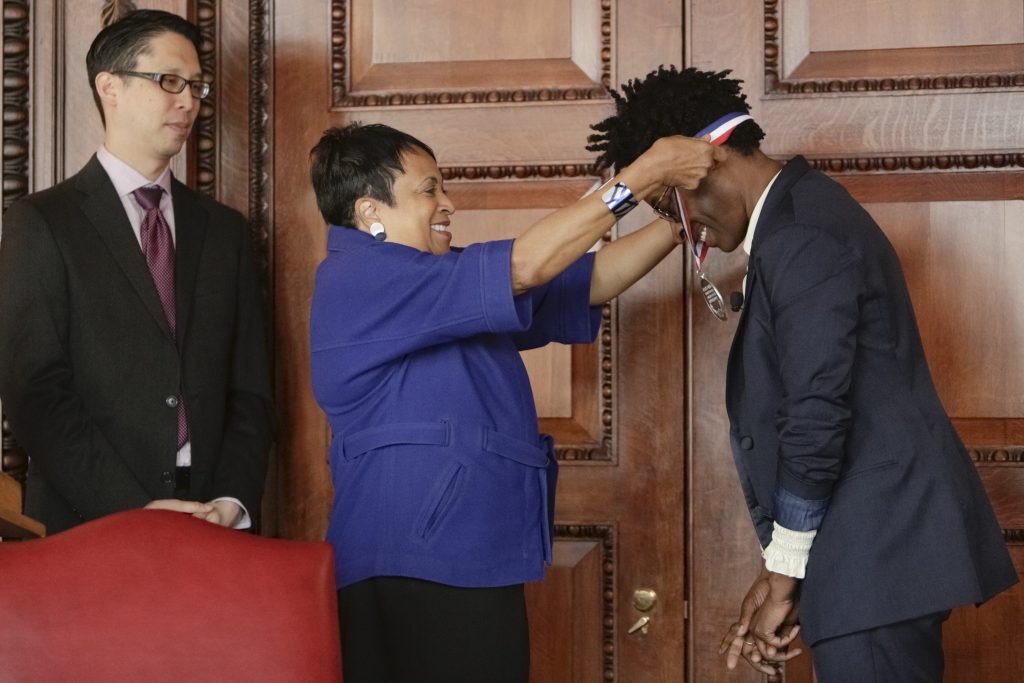 Young readers, author Jacqueline Woodson says, need books that serve as both a window and a mirror—a window that allows them to see into other worlds, a mirror that might let, say, an African-American girl or Asian boy see some part of their own identity on the page.

The books of such African-American children’s authors as Mildred Taylor and Virginia Hamilton helped the young Woodson understand her place in a bigger world—and her possibilities in life.

“Not only could I be on the page, but I could grow up and be a woman of color who wrote,” Woodson told an audience at the Library of Congress on Jan. 9. “It legitimizes us in this way, that we don’t realize our absence until we see that presence on the page.”

Woodson, a National Book Award winner and four-time Newbery Honor Medalist, hopes to use a new role to help young readers do the same.

Woodson was inaugurated as the sixth national ambassador for young people’s literature in a ceremony in the Library’s Members Room before family, friends, students, two of her predecessors in the position, authors Gene Luen Yang and Jon Scieszka, and a live-stream audience of hundreds.

“It’s an amazing honor to stand before you in the Library of Congress this morning,” Woodson told the audience. “It’s also an honor to be living in this time, to bear witness to our country’s beautiful and complicated history and its immense possibility. I do believe we’re living in a time of great, great possibility.”

The ambassador program was established in 2008 by the Library, the Children’s Book Council and Every Child a Reader to highlight the importance of young people’s literature to lifelong literacy, education and the betterment of young people’s lives. Woodson succeeds Scieszka, Katherine Paterson, the late Walter Dean Myers, Kate DiCamillo and Yang in the position.

The selection, made by the Librarian of Congress, is based on recommendations from an independent committee of educators, librarians, booksellers and children’s literature experts. Ambassadors are chosen for their contributions to young people’s literature, the ability to relate to kids and teens and dedication to fostering children’s literacy in all forms.

In conversation with Librarian of Congress Carla Hayden, Woodson discussed her plans for the ambassadorship, her love of writing and the impact of children’s literature on her own life.

Woodson fell in love with writing early on. “I’ve known I wanted to write since I was 7,” she told Hayden. “I remember as a young person loving the physical act of writing, of holding a pencil and seeing that putting letters together made words, words made sentences, sentences made paragraphs and that writing was just that organic. All you needed was that pencil and that paper and imagination.”

That passion, she eventually realized, would be her life’s work. The idea of waking up every day, unhappy at work, was heartbreaking, said Woodson, who is fond of saying, “Brilliance is passion recognized.” So Woodson honed the thing that she felt was her brilliance: the ability to tell the stories she wanted to tell.

Today, she is the author of more than two dozen books for young adults, middle graders and children. She won the 2014 National Book Award for her bestselling memoir, “Brown Girl Dreaming,” which also received the Coretta Scott King Award, a Newbery Honor and the NAACP Image Award. In 2015, she was named the young people’s poet laureate by the Poetry Foundation. Her recent adult book, “Another Brooklyn,” was a National Book Award finalist.

Her other books include “The Other Side,” “Each Kindness,” Caldecott Honor book “Coming on Home Soon,” Newbery Honor winners “Feathers,” “Show Way” and “After Tupac” and “D Foster” and “Miracle’s Boys,” which received the Coretta Scott King Award.

Part of her work as an author and, now, as ambassador is to help young people find the same kind of passion. “Everyone has that thing that they’re really good at, that they really love doing,” Woodson said. “Our work as adults is to not kill that fire. Your work as young people is to not let that fire get murdered. Then, we get to see all that brilliance in the world in a way that transforms it and transforms us.”

As ambassador, Woodson will serve a two-year term, appearing at events around the country and encouraging young people to read. She has adopted “READING = HOPE x CHANGE (What’s Your Equation?)” as her platform, a program intended to encourage young people to think about the moment they live in, the power they possess and how reading can help show them ways they can create the change they want in the world.

“I believe that reading equals hope times change,” she said. “I believe that me plus you equals a conversation. I believe that hope minus fear equals change. I believe that listening plus hearing minus judgment equals friendship. These are just a few of my equations. In the next two years, I’m eager to gather and hear yours.”

A recording of the Jan. 9 program is available on the Library’s YouTube site.