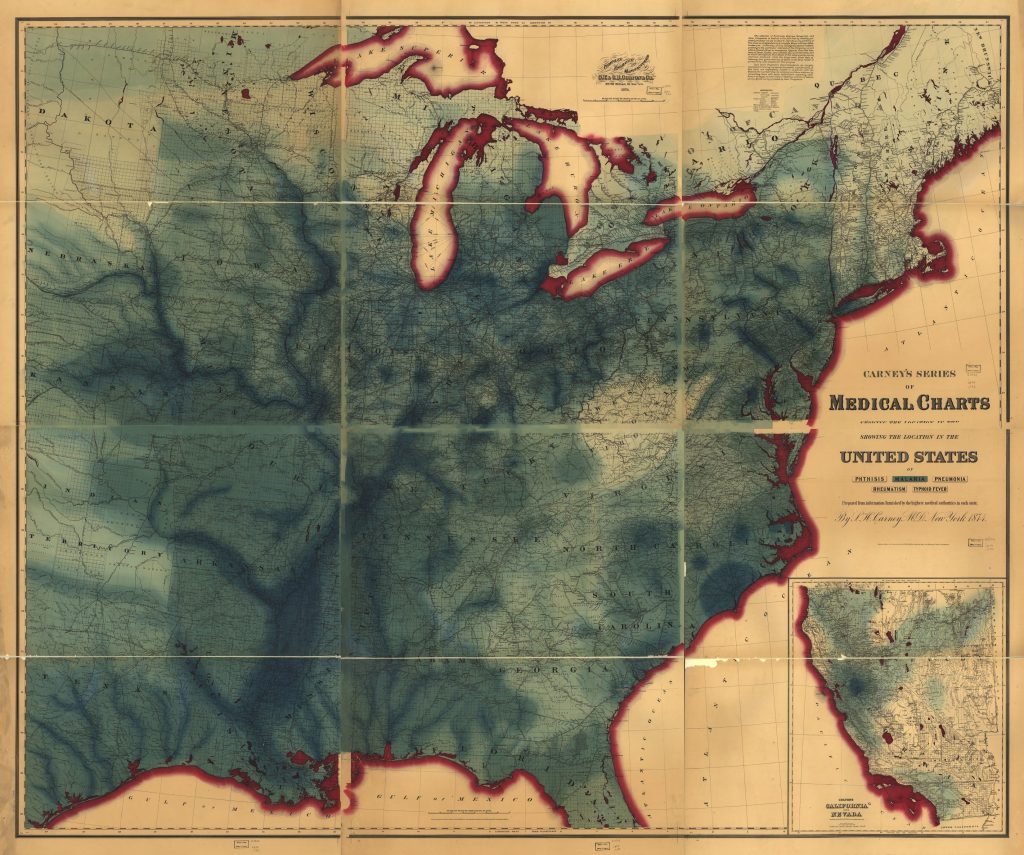 This is a guest post by Edward Redmond, a reference specialist in the Geography and Maps Division. It was originally published on the Worlds Revealed blog on April 3. Here, he discusses how maps of the 19th century documented the spread of diseases across the U.S., much as we lean on more sophisticated maps today to understand the spread of COVID-19.

Originally published in 1874, these maps of the eastern half of the United States were designed to show the distribution of diseases including typhoid, malaria, pneumonia, tuberculosis, and rheumatism. The maps were published by one “L.H. Carney, M.D.,” but we have found no biographical data on the author. Medical data (in the form of statistics) is not shown and the maps are simply shaded to show the severity of infection.

The map shown above, interestingly enough, shows few malarial infections in West Virginia, just as it the Mountain State was unaffected in the early stages of the current pandemic of COVID-19. Is it an accident of geography? Topography? Or was the area so sparsely inhabited that there were fewer reported infections than in other locations?

Conversely, this map showing the distribution of tuberculosis (red shading), focuses on major population centers rather than the map showing malarial infections (green shading) along major river systems. Even though medical statistics are not provided, one can infer by comparing the two maps that 19th-century tuberculosis cases may have been accelerated due to close living conditions in major population centers.

At roughly the same time the above maps were being prepared by commercial publishers, the United States government was producing — in association with “eminent men of science” — statistical atlases from information gathered during the 1870, 1880, and 1890 censuses. Each atlas contains statistics, displayed in a graphic form on a map, denoting the approximate number and type of mortal diseases in the late 19th century.

The image below, for example, is from the 1870 “Statistical atlas of the United States” and provides a graphic illustration of the ratio between deaths from malarial diseases as opposed to all other causes of deaths. The darker the shading translates to a higher number of deaths. 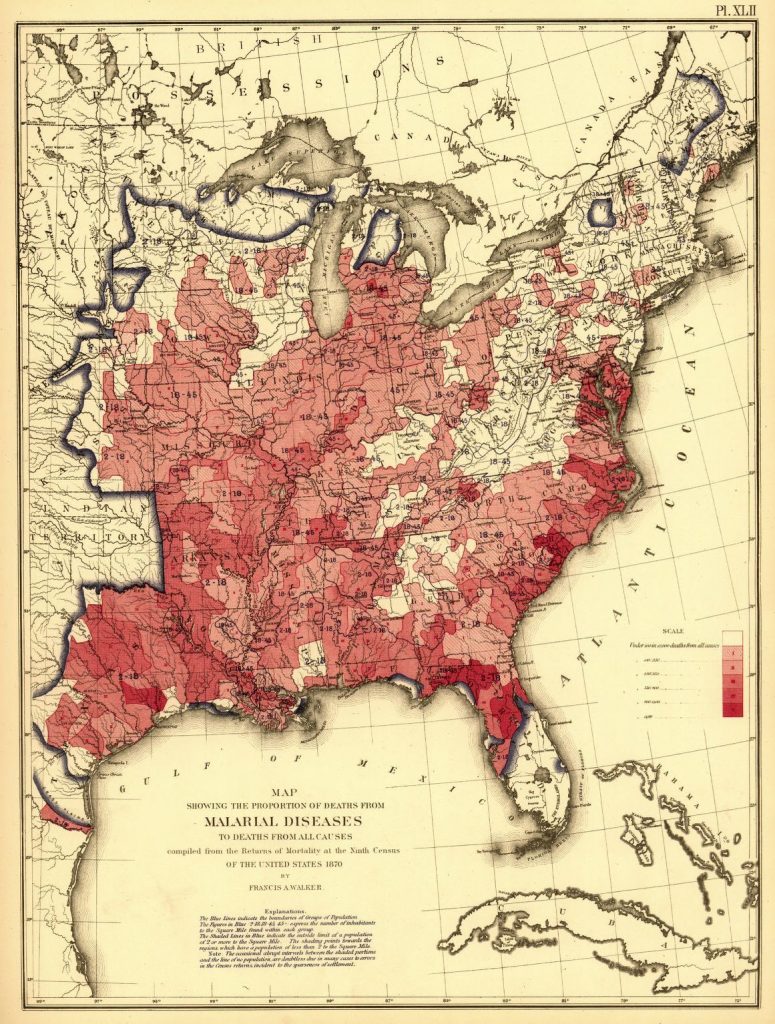 Plate showing deaths from malarial diseases in 1870. ”Statistical atlas of the United States based on the results of the ninth census with contributions from many eminent men of science and several departments of the government.” Francis Amasa Walker. United States Census Office. Ninth Census, 1870. New York. J. Bien, lith, 1874.

In 1978, the government issued its last published National Atlas representing demographics and statistics in the mid-20th century. According to the 1970 census, the number of regular and specialized care hospital beds differed greatly by state. The two plates below provide information on the number of hospital beds (general, specialized, and federal) as well as the number of medical professionals in each state. 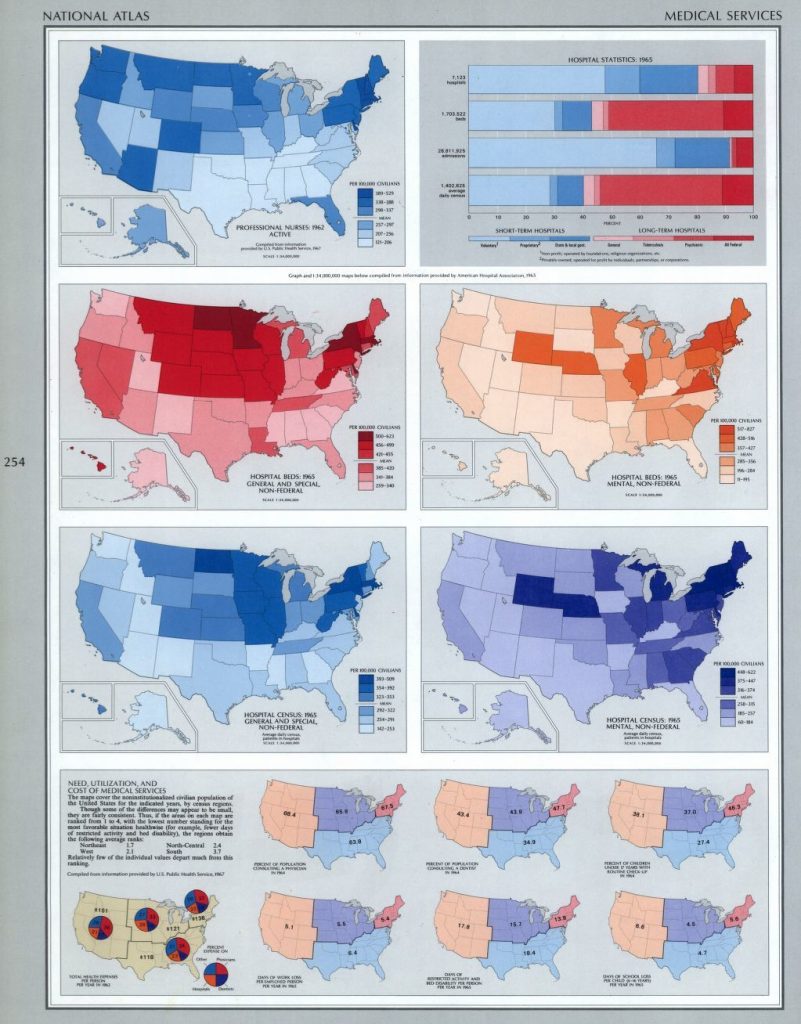 Plate shows distribution of hospital beds and medical services by state in 1970. “The national atlas of the United States of America.” Geological Survey, U.S., and Arch C. Gerlach. Washington, 1970. Geography and Map Division. 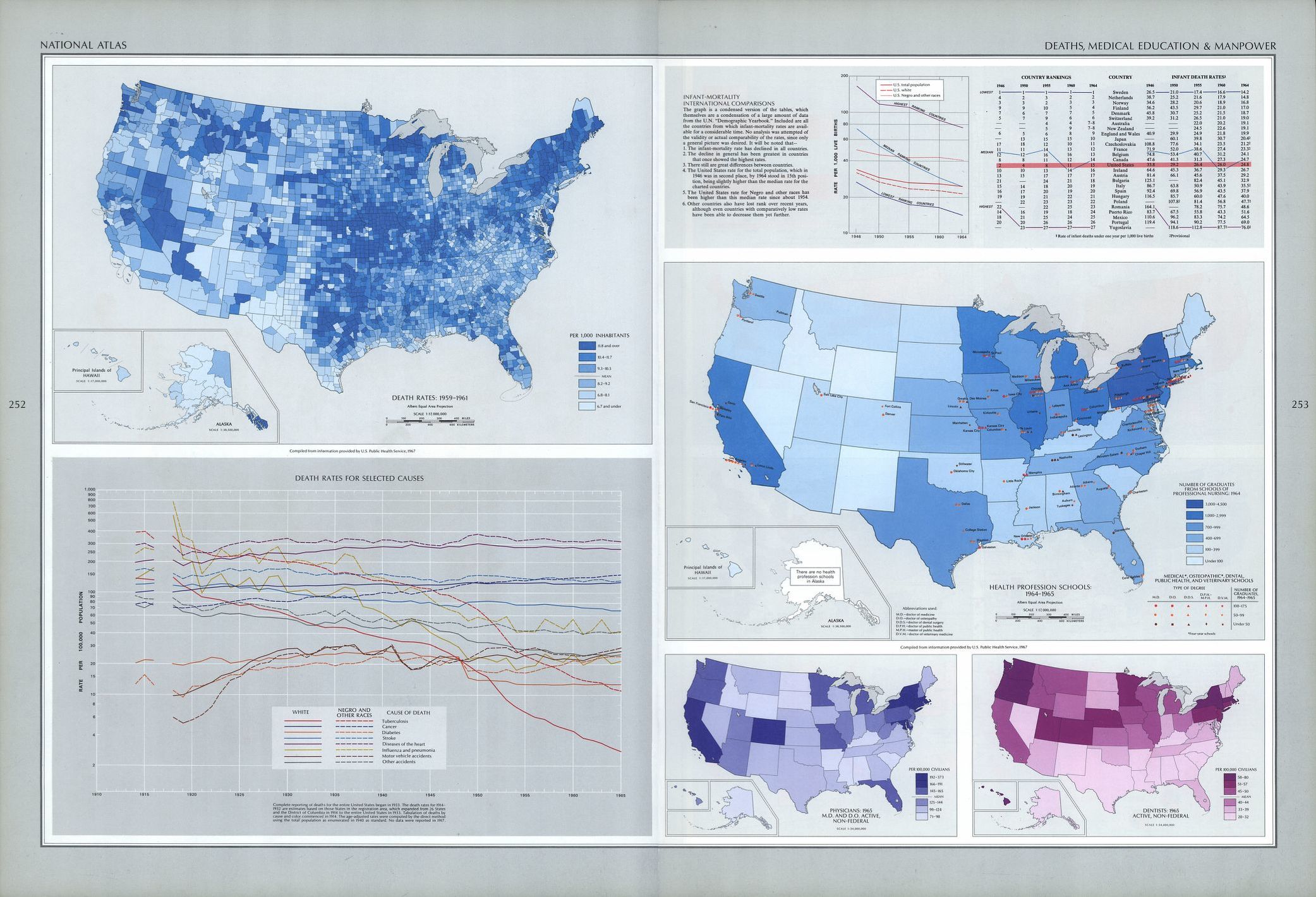 Finally, the maps provided above are intended as a way to use the historical collections of the Library to help understand the tragic situation that we now face. There will undoubtedly be statistical information published in the form of maps and digital data from this pandemic to help later generations understand the spread of disease.