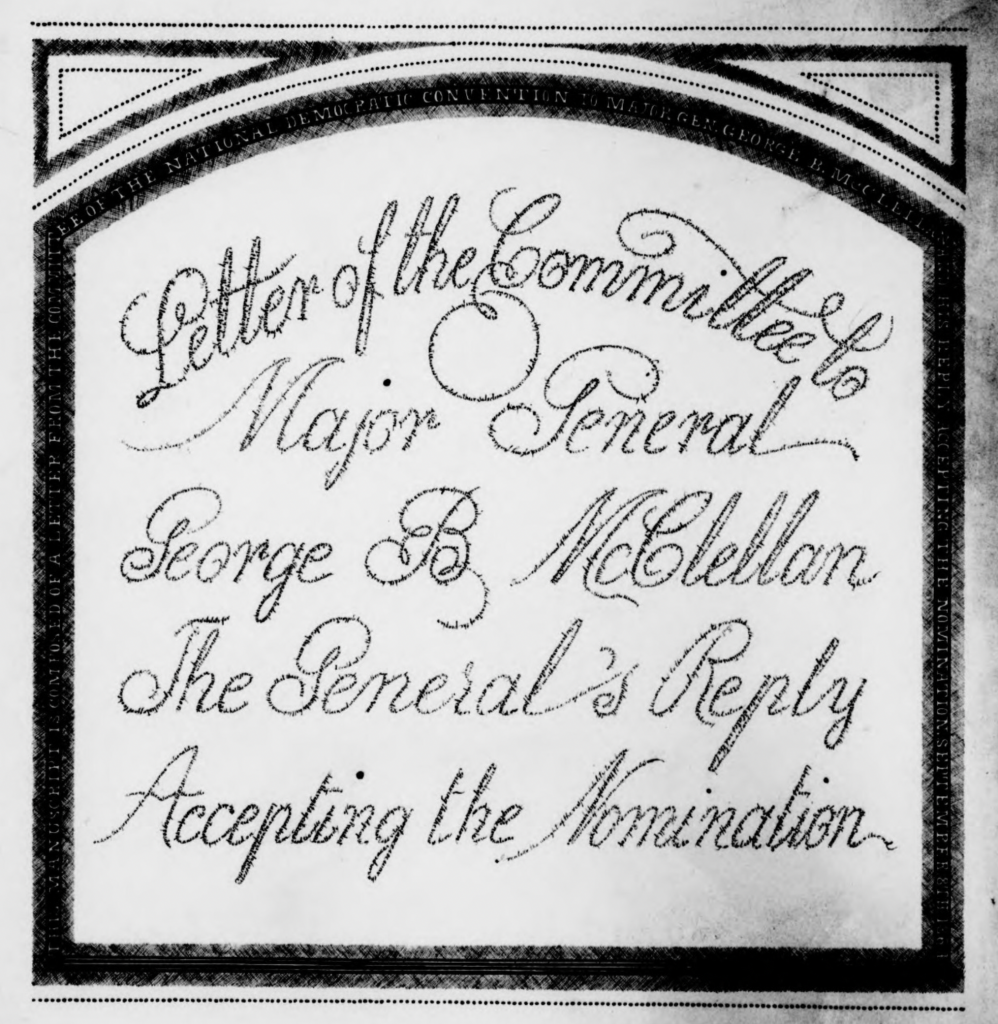 This is a guest post by Michelle Krowl, a historian in the Manuscript Division, who always writes so well about her specialty, the Civil War and Reconstruction era.

Researchers discover all kinds of materials in the George Brinton McClellan Papers that suit their varied research interests, and this collection is now available online through the Library of Congress.

Those interested in the Civil War, for example, can pore over the sections of the collection containing records from General McClellan’s 1861-1862 service in the field during the Civil War, particularly his correspondence, telegrams, and military papers. Others who are keen on engineering may appreciate McClellan’s sketches and observations of fortifications in his journals and field notebooks. The McClellan Papers also document General McClellan’s forays into politics, including his 1864 run for the presidency on the Democratic ticket, and his term as governor of New Jersey (1878-1881).

One unusual item related to McClellan’s presidential campaign caught my eye and sparked my curiosity. At first glance it appeared just to be the words “Letter of the Committee to Major General George B McClellan The General’s Reply Accepting the Nomination” written in an interesting style of cursive handwriting. Given that no document containing either the committee’s letter or McClellan’s response followed this cover page, the item seemed a bit odd.

Calligrams of the letter from the Democratic Party nominating George Brinton McClellan for its presidential nomination in 1864, and McClellan’s reply.

A closer look at the individual letters on the page, however, revealed that they were actually formed with the text of the committee’s letter and General McClellan’s reply, written in microscopic handwriting! 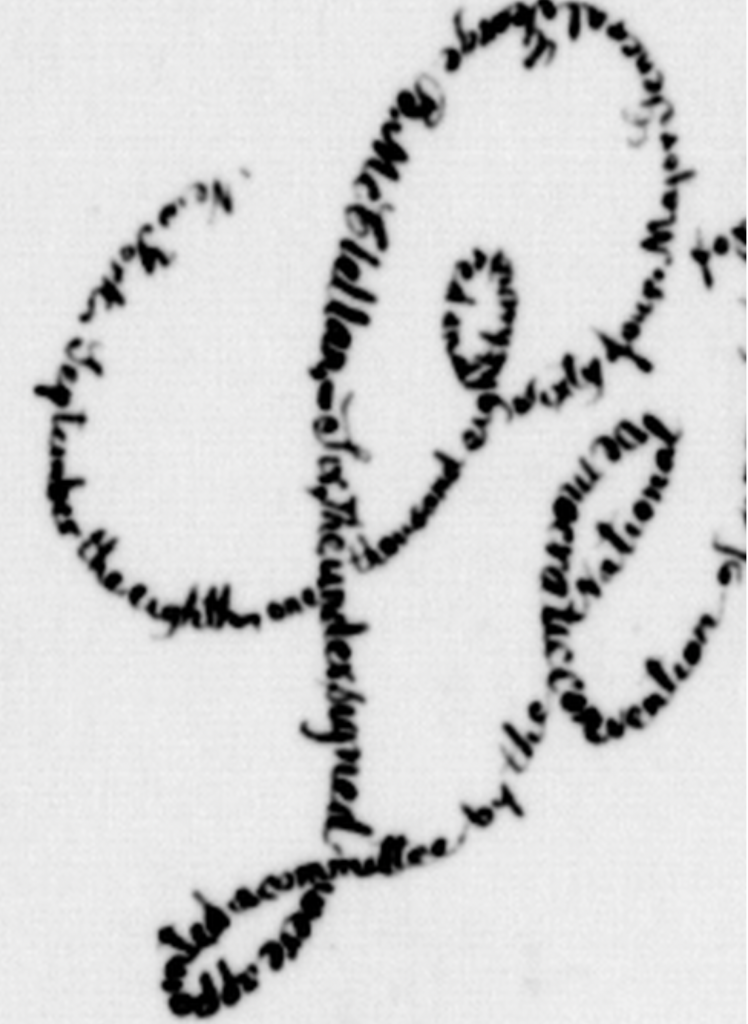 As published in national newspapers, such as the New York Herald, the committee’s letter began, “New York, Sept. 8, 1864. Major General George B. McClellan: Sir: The undersigned were appointed a committee by the National Democratic Convention, which met at Chicago on the 29th of August, to advise you of your unanimous nomination by that body as the candidate of the democratic party for President of the United States….” Sure enough, starting with the loop in the capital letter “L,” the committee’s notification letter flows until the name of the last signer of the letter (W. T. Galloway of Wisconsin) completes the crossing of the “T” in “to,” as seen below. 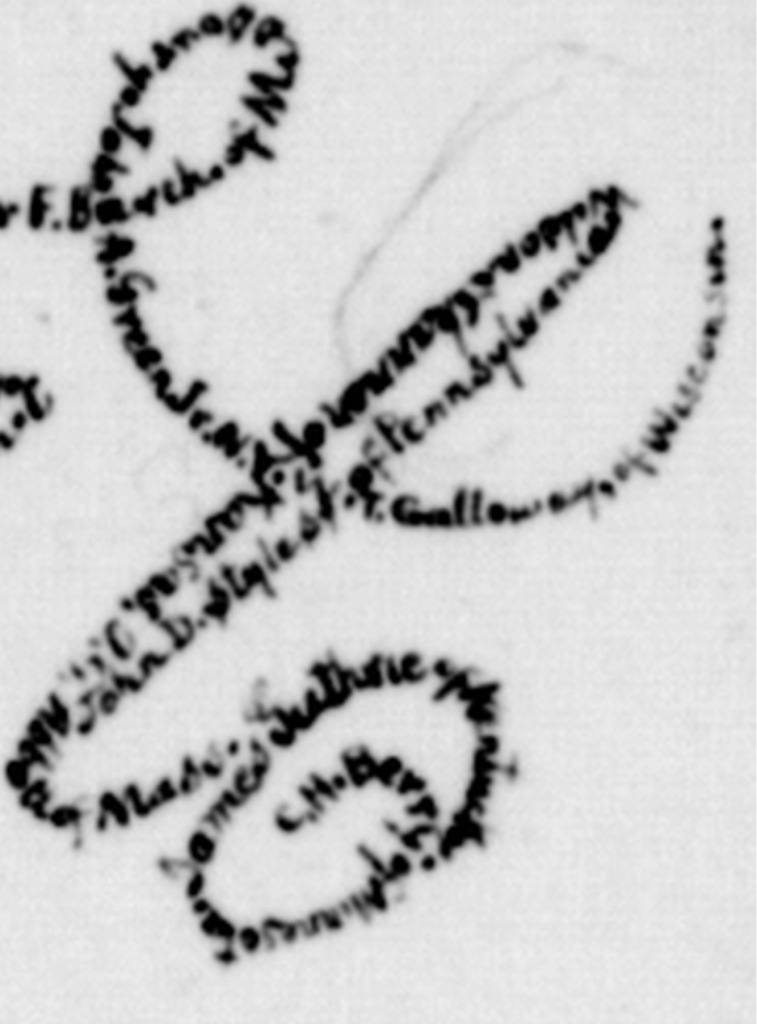 McClellan’s longer reply begins with the “M” in “Major” and winds through the rest of the document before appropriately ending with the artist’s addition of “the end” on the tail end of “Nomination.” 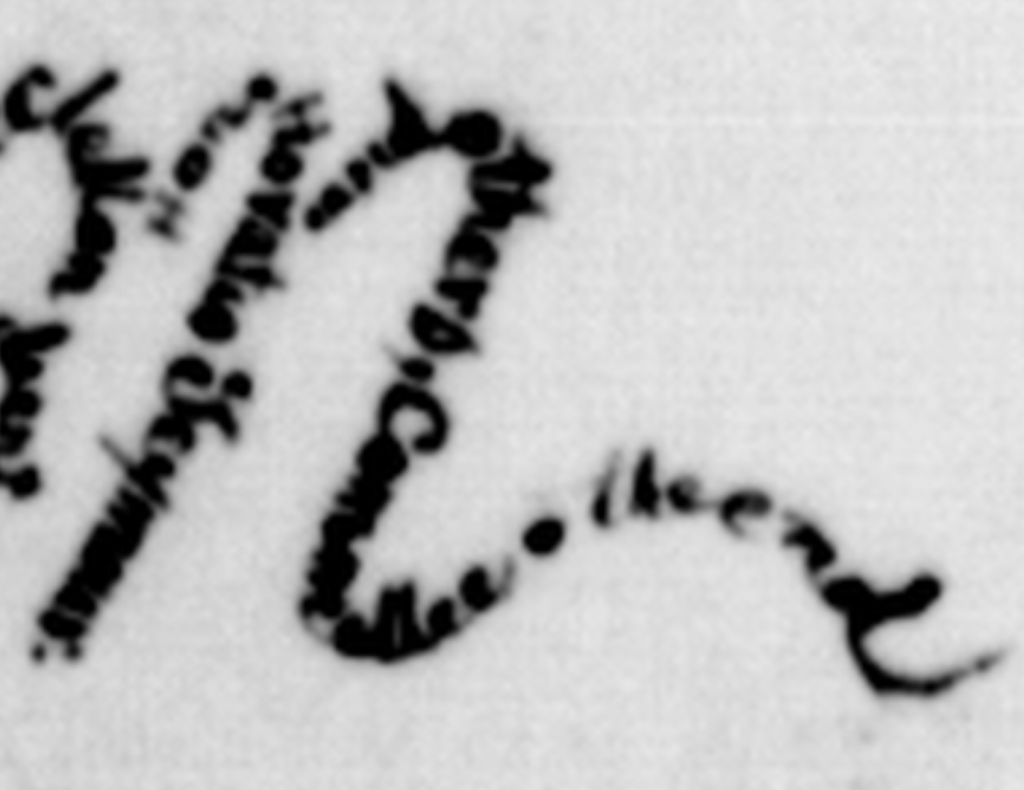 This item in the McClellan Papers is called a calligram. In this case, the words of the text are written to form the words that describe the content. More often calligrams consist of text arranged to form a representative image, such as the text of a poem about a tree forming the shape of a tree. The McClellan Papers offers at least one additional calligram, which reproduces McClellan’s June 15, 1864, oration at a monument dedication ceremony at West Point, New York. The longer text of this address resulted in an even more elaborate calligram bordered by additional explanatory text. The creator of this calligram, David Davidson of New York, signed and dated this work, and the similarities in format and style between the two calligrams suggests he produced both. Davidson seems to have been a calligrapher of some note by the 1860s, having completed calligrams of other political speeches, the Emancipation Proclamation, and the Lord’s Prayer.

But a central question still remains: WHY? Why did Davidson spend so much time creating these calligrams? Was Davidson an admirer of McClellan? Did he hope they might curry favor with the general, or attract the attention or patronage of those around him? If explanatory letters ever accompanied the calligrams when McClellan received them, they do not seem to be part of the McClellan Papers at the Library of Congress. So in the absence of evidence about Davidson’s motives, we are left simply to admire his skill in turning George Brinton McClellan’s words into works of art.