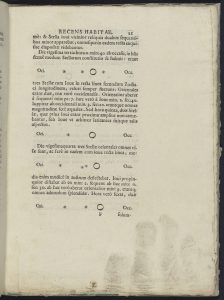 A partial handprint is visible on the bottom of this page from near the end of “The Starry Messenger.”

Asking intriguing questions can be a great way to encourage research and creative thinking. The answer to this particular question was at first disappointing. Two experts, a historian and a rare book librarian, both said that although Galileo wrote “The Starry Messenger,” he did not himself own the copy of the book now in the Library’s collections — it has attracted speculation about such features as Galileo’s name written on the cover and two ink handprints. Naturally, I asked them how they and other colleagues had reached that conclusion. They told me a fascinating story about the printing of “The Starry Messenger” in Italy more than 400 years ago and described in vivid detail the special qualities of the Library’s copy.

Mark Dimunation, chief of the Rare Book and Special Collections Division, and John Hessler, cartographic specialist and historian in the Geography and Map Division, helped me separate captivating lore from practical reality. Mark acquired this treasure in 2008, and his division hosted the symposium “Galileo’s Moons” in 2010; John has studied the text extensively and contributed to a 2013 Library co-publication about “The Starry Messenger.” I share an excerpt from our conversation below.

You can see the Library’s copy online to follow the key points and also to enjoy the beauty of the illustrations.

Tell us a little about the significance of “The Starry Messenger.”
Dimunation: At dusk on November 30, 1609, Galileo shifted his telescope in the direction of the moon. His recorded observations — the first view of the moon utilizing magnification — noted the surface of the crescent. The drawing he made that night in Padua, Italy, and five additional drawings and watercolor sketches became the basis for his revolutionary publication “Sidereus Nuncius” (“The Starry Messenger”) in March 1610. Galileo’s treatise changed the shape of the moon in the mind of the Renaissance world. He changed the nature of scientific discourse and the notion of the universe. With “The Starry Messenger” the moon was transformed into a world — not some perfect celestial sphere, but a land to be explored, charted and understood. And the heavens, often thought of in imaginative terms, were revealed to be a congregation of stars. 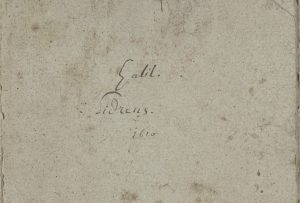 The annotation on the cover, “Galil./Sidreus./1610,” identifies the book’s author, title and date. But the handwriting does not match Galileo’s.

Did Galileo own this copy of “The Starry Messenger”? Is that why his name appears on the cover?
Hessler: There is no evidence for Galileo’s ownership of the book for a number of reasons. In a letter that Galileo wrote just one week after the publication of the book, he states that he had 30 copies specially printed for himself. He refers in the letter to these copies as being owned by him personally and that they have not yet had the great figure of the moon inserted. Of those 30 copies, 11 are known to have survived, and they are on a thinner and finer paper than the Library of Congress copy. Also, those 11 copies have, in Galileo’s own hand, up to four corrections that he made to the text, which makes it certain that he actually had them in his possession. The Library’s copy has no corrections in Galileo’s hand, nor is it printed on the finer paper. Lastly, what appears on the cover is simply “Galil./Sidreus./1610.” This text is not in Galileo’s hand, and it misspells the title of the book, which is not a mistake an author is likely to make. The more interesting inscription is the one on the next and the first otherwise blank page, “Ex libris dominici/Fratei-/Veronae.” This says that the book is from the Library of the Dominican church of Santa Anastasia in Verona, a claim that has yet to be fleshed out by scholars.

Are those Galileo’s handprints, visible in images 49 and 52?
Hessler: It is hard to prove a negative, but in this case it is even harder to imagine Galileo, who was traveling in the highest circles of the Medici orbit, talking to popes and presenting his research to cardinals, being on the floor of a print shop in Venice, his hands covered in ink, helping to pull the sheets off the press. Many scholars have noted Galileo’s oversight in the design and production of “The Starry Messenger,” but not its physical printing. This was also a very busy time for Galileo, because Cosimo de’ Medici ascended the throne upon his father’s death in 1609. Galileo had tutored Cosimo in mathematics. The young grand duke knew him well, and in 1610 offered him the position of professor of mathematics at the University of Pisa and mathematician and philosopher to the grand duke of Tuscany, after Galileo had named the moons of Jupiter after him and the family. 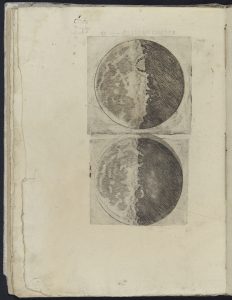 “The Starry Messenger” includes several illustrations of the moon based on drawings Galileo made from looking through the telescope.

Why is this specific copy so special?
Dimunation: The fact that the Library’s copy is untrimmed is a great benefit when viewing the two-page spread of stars showing the belt and sword of the constellation Orion and the Pleiades. The star map was printed very close to the edge of the original paper. Once bound and trimmed, copies would lose several of the stars at the paper’s edge. The Library copy is one of only a few to represent the illustration in its entirety. The Library’s copy has several features that suggest that it may not have entered the book market. It remains untrimmed, and it is only loosely stitched into a temporary paper board binder. Books treated as a printer’s or shop copy were often bound in this fashion. The copy is not pristine, and the evidence of a printer’s inky fingerprints underlines that this copy would be less likely to move into the market. This copy also displays evidence of a misprint on one set of the engravings depicting the moon; a double impression occurred when the engraving press bounced the plates.

What inspired you to study this book so carefully?
Hessler: Working on books like the Library’s copy of the “Sidereus Nuncius” is a rare privilege. I have worked for many years on a series of Galileo manuscripts about the logical foundations of scientific thought and on an ancient text called the “Posterior Analytics of Aristotle.” These early texts show how Galileo developed his scientific methodology, both embracing what was good in Greek scientific thought and rejecting its somewhat nonexperimental dogmatism. When I was first shown this copy of “The Starry Messenger,” it nearly moved me to tears, and I am not alone in those emotions. It is a truly amazing copy of one of the most revolutionary books in the history of science. It draws you in, and you cannot help seeing it as both an intellectual triumph of thought and will and as a material object to study. Holding it is a multisensory experience.

Learn More
• View the Library’s copy of “Sidereus Nuncius” online.
• For an introduction to Galileo’s discoveries, read “Stars in His Eyes,” a 2012 blog post by science reference librarian Margaret Clifton.
• Read abstracts from “Galileo’s Moons,” a 2010 symposium held to celebrate purchase of the Library’s copy of “The Starry Messenger.”