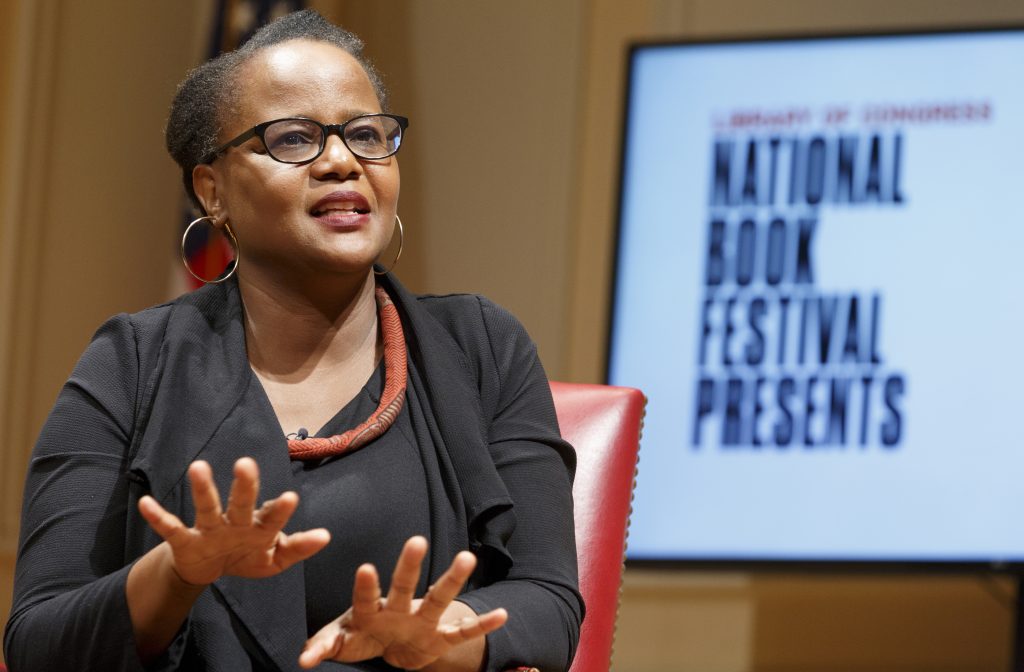 Edwidge Danticat, the Haitian-born novelist who has become one of America’s most honored authors, told a crowd at the Coolidge Auditorium this week that she first felt the magic of storytelling as a child in Port-au-Prince.

The author of 21 books, Danticat was in conversation on stage with Marie Arana, the literary director of the National Book Festival – who immigrated from Peru to the U.S. as a teen — for the third event in the Library’s new series, “The National Book Festival Presents.” Danticat was discussing her new collection of short stories, “Everything Inside,” when the talk turned to how early her narrative talents were woven into her everyday life.

“My first writing teachers were the storytellers of my childhood,” she said. “They were often people who, in their daily lives, were not celebrated much. They were really hardworking…really poor people. When they’d go into a public place, they’d have to bow their heads. But when they were in that space — when they were telling a story — they were laughing. They were free.”

That era – the early 1970s – was a difficult time, both for Danticat and her native land. The brutal dictatorship of Francois “Papa Doc” Duvalier ruled by terror. Danticat’s father fled to the U.S. when she was two and her mother followed two years later. She and her brother stayed behind with an aunt and uncle. The couple took in other children whose parents had left the country as well. The money their parents sent home allowed the cadre of children to attend good schools, but it also left them in the care of stern, church-going adults who did not have time for silliness.

Danticat — a quiet child who preferred observation to conversation – noticed that adults usually spoke to children in a firm, instructive voices, filled with directives. But when the talk shifted to stories, the mood lifted as well.

“People were happy, it was lively, and there was singing, there was songs in the stories, there was suspense, there was really a connection with young people, and I was bewildered by it,” she said. “What was the thing that was transforming the mood of these usually stern women in my life?”

Danticat’s first novel, “Breath, Eyes, Memory,” published shortly after she graduated from Barnard College, relived part of that life, turning on the relationships of women in difficult circumstances in Haiti. Oprah Winfrey picked it for her book club in 1998, marking Danticat’s career in bright letters. Her books and short stories since then have hewed to themes of Haitian history, family relationships – particularly among women – and the experiences of immigrants. Her memoir, “Brother, I’m Dying,” won the 2008 National Book Critics Circle Award and was a finalist for the National Book Award. She was awarded a MacArthur Grant the following year, and, in 2018, was awarded the Neustadt International Prize for Literature. In making the award, the Neustadt committee assessed her work as both political and personal, writing that “Danticat addresses how the specter of history haunts the unresolved present and undermines the future; how nationalism and national identity can be sources of both pride and corruption; and how parent-child bonds, no matter how damaged, can be redemptive.” 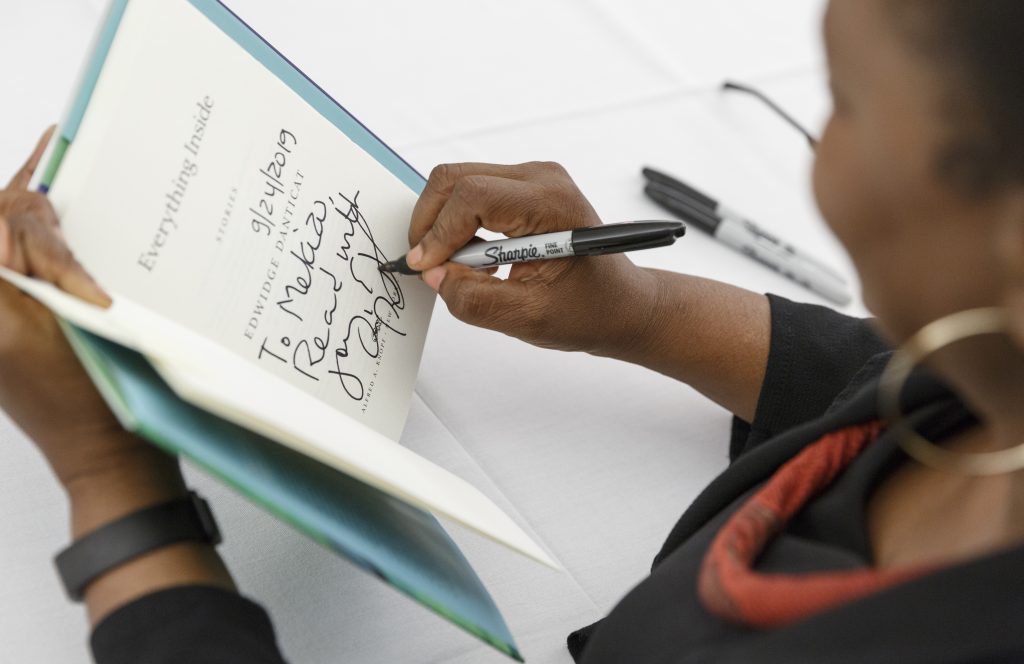 At the Coolidge, she said that history had always drawn her into its web of unfolding events.

“I was always interested in the lacunae of history, in the gaps of history that people don’t talk about,” she said. “Fiction is great for that, because you can invent a person and put them in that gap.”

Recognizing that interest, Suzanne Schadl, chief of the Library’s Hispanic Division, came on stage to present Danticat with a print from “Las Antillas Letrades,” a 2014 work by Puerto Rican graphic artist Antonio Martorell. The print features one of Danticat’s inspirations, fellow Haitian novelist Marie Vieux-Chauvet. Her most famous book, “Love, Anger and Madness,” is composed of three novellas that present a take on a thinly disguised Duvalier regime. She had to flee the country for her safety, and the book was out of print for decades. Danticat wrote the introduction to the English translation, published in 2010 by Modern Library.

She had, after all, her own experiences with living abroad. In the early 1980s, when she was reunited with her parents in New York, she was 12. Her father wasted no time in taking her to the Brooklyn Library. She was amazed that the library let her take books home, but slightly disappointed that she could “only borrow 10 at a time.”

Though she was in the United States, the family remained deeply involved in Haiti, with her parents repeatedly telling the children that, although they had left home, home had not left them. This balancing of cultures led to a sense of being in two nations at once, a sense heightened after she became fluent in English. Her parents relied on her to accompany them on doctor’s office visits, where she would have to translate the most personal of conversations. At home, adults would often ask her to write letters for them, including love letters, which led to more insight into the strange world of adults.

“For a writer, what’s better than being allowed into intimate spaces in people’s lives? Afterward, they would act like it didn’t happen, and I would go back to being a small child.”