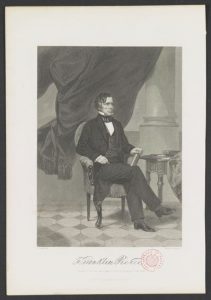 An engraving of Franklin Pierce from the mid-1840s. The Library recently placed Pierce’s presidential papers online. 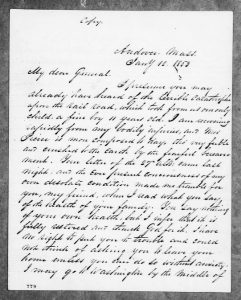 An 1853 letter from Pierce to his future war secretary, Jefferson Davis, following the death of Pierce’s son in a train derailment.

The Library of Congress’s presidential papers tell the American story in the words of those who helped write it: through war and peace, prosperity and hard times, from George Washington to Calvin Coolidge.

The Library is currently conducting a years-long project to digitize the nearly two dozen presidential collections in its holdings and place them online—an effort that, when completed, will add more than 3 million images to its online archives and give wider public access to some of the most important papers in U.S. history. A list of the Library’s presidential papers that have already been digitized and placed online is at the bottom of this post.

“These are among our most prized collections. They cover the entire sweep of American history, from our founding to the eve of the Great Depression,” said Janice E. Ruth, assistant chief of the Manuscript Division. “They were preserved and microfilmed for use by the American people, to advance our understanding of our history.” 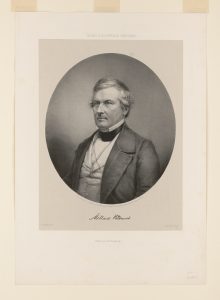 A circa 1850 lithograph of Millard Fillmore based on a Mathew Brady photograph. The Library recently posted Fillmore’s papers online.

The Library recently released the Franklin Pierce papers and the Millard Fillmore papers; the Ulysses S. Grant and James K. Polk papers will be available later in the year.

Those follow the additions of the James Monroe and Andrew Jackson papers in 2015 and Martin Van Buren, William Henry Harrison, John Tyler and Zachary Taylor last year. The Library digitized and placed online the papers of George Washington, Thomas Jefferson, James Madison and Abraham Lincoln more than a decade ago.

In all, the Manuscript Division holds the papers of 23 presidents, from Washington through Coolidge—collections that include some of the nation’s most important and treasured documents: Jefferson’s rough draft of the Declaration of Independence, Madison’s notes on the proposed Bill of Rights, Lincoln’s drafts of the Gettysburg Address and the Emancipation Proclamation.

The papers also reveal great figures as ordinary men who, like their fellow citizens, faced personal hardships and heartaches, found and lost happiness and experienced the pains and pleasures of everyday life: Grant composes sweet letters to his wife, Julia; a 13-year-old Washington practices geometry in his school copybook; Jefferson discusses his burial wishes; Theodore Roosevelt confides his suffering in his diary.

“The light has gone out of my life,” Roosevelt wrote beneath a big black X on Feb. 14, 1884—the day both his mother and wife died. 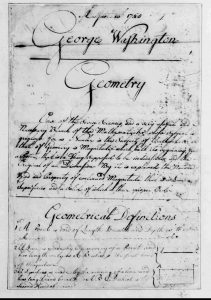 A page from George Washington’s school copy book from 1745. 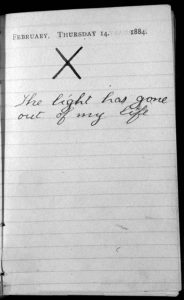 Pierce experienced terrible tragedy, too. One of his three children died in infancy and another of typhus at age 4. Less than two months before Pierce’s inauguration, tragedy struck again. His last surviving child, Benjamin, was killed in a train derailment, dying in front of his parents’ eyes.

“I presume you may already have heard of the terrible catastrophe upon the rail road, which took from us our only child, a fine boy 11 years old,” Pierce wrote to his future secretary of war, Jefferson Davis. “I am recovering rapidly from my bodily injuries, and Mrs Pierce is more composed to day, tho’ very feeble and crushed to the earth by the fearful bereavement.”

The National Archives and Records Administration, founded in 1934, oversees the papers of presidents beginning with Herbert Hoover. The Library acquired many of its priceless collections before that time, through purchase or donation.

The federal government, for example, purchased Washington’s papers from his great-nephew. Grant’s family donated his in three separate gifts, decades after his death. William Howard Taft deposited his papers at the Library before his death.

In such ways, the Library acquired the papers of most, but not all, of the 29 presidents who served before Hoover.

The Manuscript Division does not hold, for example, the papers of John Adams or John Quincy Adams. And it holds only smaller collections of a few other presidents, such as Fillmore and James Buchanan; those are not counted among the Library’s 23 presidential collections.

In 1957, Congress passed legislation directing the Library to arrange, index and microfilm the presidential papers for distribution to libraries around the country—a massive project that was completed 19 years later.

With the dawn of the digital age, the presidential papers were among the first manuscripts proposed for digitization. The microfilm editions of the Washington, Jefferson, Madison and Lincoln papers were digitized and put online between 1998 and 2005 (an improved version of the Lincoln papers is expected to go online this year).

In 2010, the Library began digitizing the remaining collections of presidential papers—a project that’s ongoing. The final result will be a massive addition of material online: The Taft papers alone encompass more than 785,000 images, the Woodrow Wilson papers nearly 620,000. Even the smaller Polk papers will produce nearly 56,000.

Placing all that material online, Ruth said, is a boon for researchers who in the past might have had to travel to Washington to study the microfilm or arrange for an inter-library loan from a state institution. “Now, we are making them accessible everywhere at anytime.”

Papers of U.S. Presidents Online at the Library of Congress