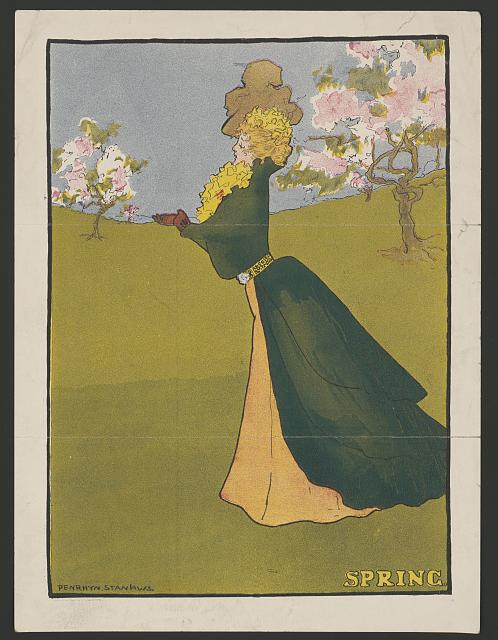 Temperatures are still a little cool here on the East Coast, but it’s definitely time to put those winter coats away: spring arrived officially on March 20 at 6:29 am EDT. Soon, pleasant days like the one captured in this poster will be common. Penrhyn Stanlaws created the poster in 1907 and titled it, simply, “Spring.”

It is part of the Library’s online Artist Poster Collection. Online offerings make up a small but growing proportion of the more than 85,000 artist posters in the Library’s collections, dating from the 19th century to today. The series includes many fine examples from styles including Art Nouveau, Russian Constructivism, Art Deco, Bauhaus and Psychedelic.

Most of the posters were produced in the United States, but other countries are represented as well. The posters came to the Library as copyright deposits, gifts, transfers, purchases and exchanges; their subject matter covers travel and tourism, cultural events, advertising, sports and more.

Penrhyn Stanlaws (1877–1957) was a well-known portrait painter and illustrator of his day. His depictions of elegant “Stanlaws Girls” graced the covers of magazines such as the Saturday Evening Post and Colliers, and their popularity rivaled that of Charles Dana Gibson’s “Gibson Girls.”

Born in Dundee, Scotland, the multitalented Stanlaws built the Hotel des Artistes in New York City in 1917, then the largest studio building in the United States, and he directed motion pictures including “The Little Minister” starring Betty Compson. He died in Los Angeles after falling asleep while smoking in an upholstered chair, setting his studio on fire.