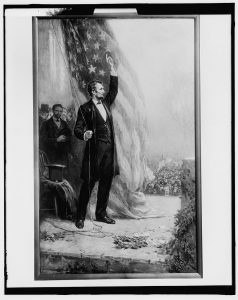 Imagine you can hear Abraham Lincoln speaking the words from his famous Second Inaugural Address: “With malice toward none; with charity for all.” What voice did you supply for Lincoln? Was it a resonant baritone, or a high-pitched tenor?

While many people expect that Lincoln must have had a deep, stentorian tone, Lincoln’s true voice was high pitched and reedy. It was this voice that Daniel Day-Lewis used to portray Abraham Lincoln in the 2012 film “Lincoln,” and which provides a close approximation of the real Abraham Lincoln’s voice.

A number of Lincoln’s contemporaries left accounts of his voice and speaking style. Journalist Horace White described Lincoln as having “a thin tenor, or rather falsetto, voice, almost as high-pitched as a boatswain’s whistle.” Others described it as “shrill” and “sharp,” which the New York Herald noted in February 1860 had “a frequent tendency to dwindle into a shrill and unpleasant sound.” For most listeners, however, the power of Lincoln’s words soon outweighed any discordant note in his delivery. 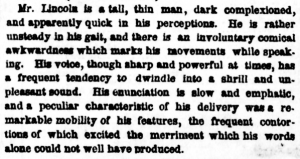 Excerpt from “The Presidential Campaign,” published on Feb. 28, 1860, in the New York Herald.

Despite its high pitch, Lincoln’s voice carried, an important quality for speakers at large gatherings in the preamplification age. Observers noted that Lincoln’s voice had “much carrying power, that could be heard a long distance in spite of the bustle and tumult of a crowd.” The “rich baritone” of Lincoln’s rival Stephen A. Douglas may have been more pleasing to listeners during the 1858 Lincoln-Douglas Debates, but Lincoln’s tenor “had better wearing qualities” and could be heard by those at the far edge of the crowd.

Lincoln also spoke slowly, allowing his words to be considered and understood. While this pace may have accorded with Lincoln’s own speaking style, he clearly recognized the value of a slow cadence in a public address. Unable to attend a rally in Springfield, Illinois, in 1863, he sent a letter to be read aloud on his behalf, a draft of which is in the Abraham Lincoln Papers at the Library of Congress. “You are one of the best public readers. I have but one suggestion,” Lincoln advised his political associate James C. Conkling: “Read it very slowly.”

Lincoln’s speaking voice carried the accents and phrases of a youth spent in Kentucky and southern Indiana. The most oft-quoted example is that of Lincoln’s tendency to pronounce “chairman” as “cheerman.” Among the research files of Indiana senator and Lincoln biographer Albert J. Beveridge at the Library of Congress is a list of southern Indiana dialect words prepared in 1924 by a correspondent who, like Lincoln, grew up that part of the state in a family who had lived there for generations. In southern Indiana, “window” became “winder,” according to Charles Remy; “learned” was pronounced “larnt”; and the word “reckon” substituted for “assume.”

A section from “Words of Southern Indiana Dialect” provided by Charles Remy to Sen. Albert Beveridge in October 1924.

Lincoln’s misspellings in handwritten documents also suggest his phonetic pronunciations of some words. Interestingly, Lincoln frequently misspelled “inaugural” as “inaugeral.” He even misspelled the word in his inscription to his secretary John Hay, to whom Lincoln presented the handwritten manuscript copy of his Second Inaugural Address. 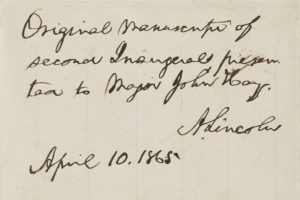 Abraham Lincoln’s inscription to John Hay in presenting the manuscript of his
Second Inaugural Address, in which Lincoln spelled “inaugural” as “inaugeral.”

In addition to clues to Lincoln’s voice suggested by regional dialects and recorded by contemporary accounts, Abraham Lincoln himself provided actors in the future with a valuable gift for recreating his famous Second Inaugural Address. Lincoln physically cut and pasted the printed proof of his address into a script that served as his reading copy on March 4, 1865.

Anyone who wonders where Lincoln might have paused for emphasis need only consult this document for direction. Journalist Noah Brooks recorded that the audience applause after “both parties deprecated war, but one of them would make war rather than let the nation survive, and the other would accept war rather than let it perish” led to a considerable pause before Lincoln intoned, “And the war came.” But Lincoln had already planned for the pause. Four little but powerful words were snipped from the paragraph and pasted on their own line below: “And the war came.”

And thanks to contemporary observers and Daniel Day-Lewis’s performance in “Lincoln,” we have a better appreciation of what Abraham Lincoln sounded like when the war came.