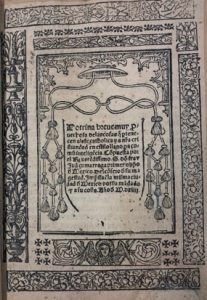 This is a guest post by John Hessler, curator of the Jay I. Kislak Collection of the History and Archaeology of the Early Americas at the Library of Congress.

On June 12, 1539, a boat set sail from the Spanish city of Seville containing a cargo that would change the face of the Americas forever. On board was Giovanni Paoli (1500–61), perhaps better known by his Spanish name, Juan Pablos. He had been sent to the New World by Juan Cromberger (d. 1540), one of the most successful printers in Spain, to establish the first printing press on the new continent; with Pablos came all the materials and knowledge necessary to start publishing books in the Americas.

Juan Pablos arrived in Mexico City in October 1539 and quickly set up a press that would become known as the Casa de Juan Cromberger. Between Pablos’ arrival and his death in 1561, he published 37 titles, taking over full ownership of the press after Cromberger’s death in 1540. Only some the titles printed survive to the present day.

His first book, the earliest known to have been published in the Americas, came off the presses in 1539. It was titled the “Breve y más compendiosa doctrina Christiana en lengua Mexicana y Castellana,” which translates to “Short Compendium of Catholic Doctrine in Both Nahuatl and Spanish.” The first archbishop of Mexico, Juan de Zumárraga (1468–1548), wrote the book, apparently in both the indigenous language of Nahuatl and in Spanish. Unfortunately, no copies of the book have survived. Through the centuries, it has taken on legendary status, as scholars, collectors and antiquarians have continued to seek it out.

The distinction of being the first book printed in the Americas that can still actually be read goes to another Zumárraga title, “Doctrina breve muy provechosa,” or “Brief and useful Catholic Doctrine,” dating from 1543–44. The Library’s Rare Book and Special Collections Division holds a copy of this extremely rare book.

In it, one finds explanations and philosophical arguments related to the moral and theological principles necessary for a Christian life – the book was part of Zumárraga’s project to convert the peoples of Mexico to the Catholic faith.

Specialists who sit down to read book – which because of the typeface is not for the faint of heart – are immediately struck by the fact that it copies, in Spanish translation, much of the content of a far more famous book, the “Enchiridion,” translated as the “Handbook of a Christian Knight,” by the great humanist scholar Erasmus of Rotterdam (1466–1536).

The “Doctrina breve” contains much more, however, than a simple copy of Erasmus’ text. It narrates the Catholic articles of faith, explains the sacraments, talks about the various kinds of sin and works of mercy, and it delves deeply, in its 168 pages, into the importance of living a moral life. 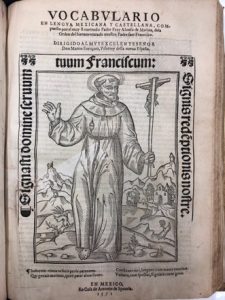 The early printing press, wherever it was found, was often controversial. The one set up in Mexico City by Cromberger and Paoli in 1539 was no different, as it opened up the Americas to the revolution of print that was sweeping through Europe. In 1559, nine years after Zumárraga died, the Mexican church temporarily banned the “Doctrina breve,” somewhat mysteriously. The “Enchiridion” was also considered by many in the church to contain heretical doctrine; it, too, was prohibited reading in 1559.

As publishing increased in the New World, however, it was not only church doctrine that became the subject of the new print culture. Indigenous languages, histories and customs also began to be more widely studied and read, quickly producing such printed masterworks as Alonso de Molina’s (1514–79) “Vocabulario en lengua castellana y Mexicana,” a bilingual dictionary of Spanish and Nahuatl. Originally called the “Aquí comiença un vocabulario en la lengua castellana y mexicana,” it was edited by Juan Pablos in 1555 and was the first dictionary of any kind to be published in the New World.

In the Americas, the printing press gave voice to both indigenous and European thought, as the two cultures began the long and difficult process of accommodating each other in the 16th century. What started as a trickle of books in 1539 increased rapidly and became, to quote Johannes Guttenberg, “a spring of truth” that would “scatter the darkness of ignorance and cause a light heretofore unknown to shine amongst men.”