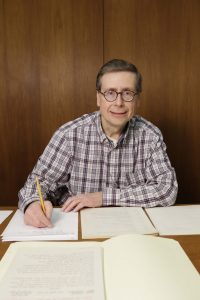 Karl Schadow began his lifelong love affair with radio drama in the 1970s when, as a youth in Schenectady, New York, he became a fan of “CBS Radio Mystery Theater.” The program was a surprise hit between 1974 and 1982, appealing to an audience that included many who remembered radio drama fondly as a form of family entertainment.

Schadow went on to become a microbiologist, working at universities across the United States. But he maintained his interest in radio drama, researching it as time allowed. His hobby took him to the Library of Congress for the first time in 1994 to investigate holdings from the 1920s through the 1950s—considered radio’s Golden Age.

Schadow has continued to visit the Library regularly ever since. Now based in Virginia, he is a full-time independent radio history researcher. He estimates that his quest has taken him to most, if not all, of the Library’s divisions and reading rooms. But he most often works with the Copyright Drama Deposit Collection in the Manuscript Division and recordings and scripts from the Motion Picture, Broadcasting and Recorded Sound Division.

“Mr. Schadow’s work in the Library of Congress’ sound archives represent the best of radio research,” comments Josh Shepperd of the Catholic University of America, director of the Library’s Radio Preservation Task Force.

Created in 2014 as part of the Library’s National Recording Preservation Plan, the task force encourages preservation and research of radio history. Among its current projects, it is developing a national database to identify and make searchable information about historical recordings, beginning with radio broadcasts.

Here Karl Schadow answers questions about his research and his experience at the Library.

Tell us about favorite radio programs you’ve researched.
My fancy is mystery and horror. A favorite program is “Dark Fantasy,” which aired over NBC in 1941–42. It was produced at station WKY (Oklahoma City) and thus not by one of the “big three” (New York, Chicago, Los Angeles). There are recordings and scripts of this series housed in the Recorded Sound Division. Another similar program is “Murder at Midnight,” recorded in 1946 by Louis G. Cowan, an independent radio producer. All 52 scripts of this series are available in the Copyright Drama Deposit Collection. A third favorite is “Stay Tuned for Terror,” the scripts of which (by Robert Bloch of “Psycho” fame) are purported to be held at the Library. There is an ongoing search for the set of these elusive beasts.

What is your goal in reconstructing the history of radio’s Golden Age?
I want to enlighten as many people as possible as to the significance of radio’s history, especially dramatic series, often called “the theater of the mind.” Radio is an important part of popular culture along with literature, film, stage and television. Another objective is to continue to promote the legacy of all of those individuals who participated in these ventures.

What discoveries stand out from the Copyright Drama Deposit Collection?
There are literally thousands of radio scripts in the Copyright Drama Deposit Collection. While many well-known programs are to be found there, such as “Lux Radio Theatre” and “The Green Hornet,” it is the more obscure series, including those mentioned above, that offer the radio enthusiast the greatest opportunity for discovery.

How do copyright records generally support your work?
Copyrighted scripts may be the only source (print or otherwise) that is extant for a given radio program. The script identifies the author (whether an individual or a firm) and may also include names of the cast and production crew. Sometimes only an audition or first episode is registered for copyright. In other instances, entire seasons or broadcast runs have been preserved. Scripts submitted for copyright may also function as an additional copy or source for comparative study. For example, there are sets of scripts for “The Chase and Sanborn Program” featuring Edgar Bergen and Charlie McCarthy, in both the Recorded Sound Section (NBC Collections) and the Manuscript Division (copyright dramas).

What radio broadcasts in the collections have especially fascinated you?
The OWI (Office of War Information) audio is one of the more fascinating collections in the Recorded Sound Division. The OWI collected many programs aired on networks for distribution during World War II. For example, there are recordings of “Camp Grant in Review,” a variety program from an army installation in Illinois, which aired on the Mutual Broadcasting System. There are also recordings made in San Francisco of a daytime serial (soap opera), “Sparks of Friendship,” which aired only in the Midwest. They are contained in the George Garabedian Collection in Recorded Sound Division.

How do you share your findings?
My research has appeared in publications of the radio (“Radio Recall”) and pulp-magazine (“Blood ‘n’ Thunder”) fields, and also online at www.mysteryfile.com. Moreover, I’ve had the opportunity to write the program guides (liner notes) for several CD sets released by Radio Spirits. I’m now preparing presentations for meetings of the Metro Washington Old Time Radio Club and the Mid-Atlantic Nostalgia Convention.

What has your experience been like conducting research at the Library?
The staff of both the Recorded Sound Section and the Manuscript Division continue to go the extra mile in making materials available for research. The focus here, however, should be the subject matter of the research rather than my personal experiences.

For information about the Library’s efforts to preserve radio history and encourage its study, visit the website of the Radio Preservation Task Force.