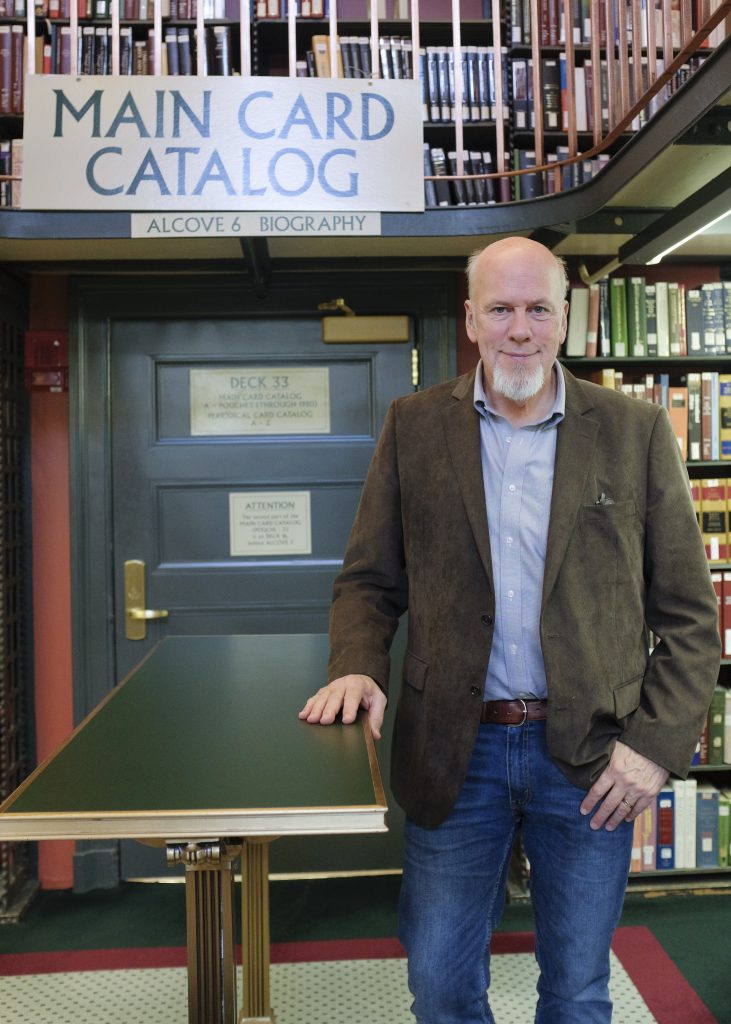 James McGrath Morris first came to the Library of Congress as a researcher in 1974. As a concerned citizen, he wanted to inform himself about a matter that was then in the news.

President Richard Nixon had recently appointed Sen. William B. Saxbe of Ohio as attorney general to replace Elliot Richardson, who had resigned during the infamous Saturday Night Massacre. Earlier, in Feb. 1969, Saxbe had voted for a pay increase for cabinet officers, including the attorney general, which had become law. At the Library, McGrath researched constitutional law, specifically whether a member of Congress could accept a position for which Congress had raised the salary during the member’s term in office.

The question became moot when Congress reduced the attorney general’s salary to what it had been before the 1969 vote. But Morris’ interest in the Library stayed with him. When, in the 1980s, he began writing narrative nonfiction, he returned to the Library. He has continued to visit and use the collections ever since—physical and electronic—while publishing a series of acclaimed biographies and works of nonfiction.

Morris’ most recent biography, “The Ambulance Drivers: Hemingway, DosPassos, and a Friendship Made and Lost in War,” was published in March 2017. His 2015 book, “Eye on the Struggle: Ethel Payne, the First Lady of the Black Press,” a New York Times bestseller, was awarded the Benjamin Hooks National Book Prize. His 2010 book, “Pulitzer: A Life in Politics, Print and Power,” was named by the Wall Street Journal as one of the best books about American moguls. The Washington Post selected “The Rose Man of Sing Sing: A True Tale of Life, Murder and Redemption in the Age of Yellow Journalism” among its best books of the year for 2004. Morris is also author of “Jailhouse Journalism: The Fourth Estate Behind Bars,” which tells the story of inmates in U.S. prisons who publish their own newspapers.

Beyond books, Morris’ writing has appeared in newspapers and magazines including the Washington Post, the New York Observer, the Progressive and the Wilson Quarterly. He is a founding member of Biographers International Organization.

In 2010, Morris appeared at the Library of Congress National Book Festival to discuss his biography of Pulitzer. You can scroll down to listen to the webcast. But first read Morris’ responses to our questions about his career and his experience as a researcher at the Library.

Tell us a little about your background.
I’m in my 60s now. I worked for a decade as a journalist, a decade in the book and magazine business and a decade as a high school teacher. I’ve now worked more than a dozen years as a full-time author. I grew interested in writing when I was a teenager out of love for reading. As odd as it may sound, I gravitated to newspaper obituaries. They were engaging, well-crafted accounts of a person’s life mixed in with a lesson in history. So I think it’s no accident that I ended up writing biographies.

Many years later, when I became a high-school teacher—instructing government to seniors in the suburbs of Washington, D.C.—I introduced students to the Library. In fact, a few assisted me with research I was doing on a book, and I like to think they, too, fell in love with the Library. While the Library remains one of our nation’s most important cultural institutions, few young people have a reason to come into contact with it.

How do you select subjects to write about?
That’s a tough question. Selecting a subject for a biography is a bit like dating. Not only does the person have to be appealing, but it also must be a good match. And even when that works, there are other considerations: First, is there material by which one can write a biography? I once wanted to write a book about Edward Bellamy, the author of “Looking Backwards,” only to find all his papers had been lost in a house fire. Second, is there a publisher willing to take on the work? Biographies require a lot of research, so obtaining an advance is usually a crucial part of the question. I often come up with what I think are brilliant ideas only to find that neither my agent nor potential editors share my enthusiasm.

Which books have you researched at the Library?
After my first experience at the Library in 1974, I returned in earnest in the 1980s, when I was working on my book “Jailhouse Journalism,” which is about the newspapers and magazines that inmates have published in American prisons for 200 years. I had a rare thing—a stack pass. So I got to know the shelves in the Library really well. I also made discoveries that weren’t in the old card catalog.

Aside from “Jailhouse Journalism,” I researched “The Rose Man of Sing Sing,” “Pulitzer”and “Eye on the Struggle” at the Library. The latter book might not have been possible without the material in the Library’s Manuscript Division, one of the best and best staffed in the nation.

What has your experience been like conducting research at the Library?
Perhaps some of the best days of my life have been spent in the Library. To sit in the Main Reading Room paging through a tome that others once consulted connects one to researchers of the past and those yet to come, all with a puzzle for whose solution they turn to the Library. Even now, when I come up the back stairs of the Jefferson Building to reach the Main Reading Room my heart beats a little faster, not from the climb, but from the anticipation of what awaits me.

What surprising finds have you made in the collections?
The most remarkable finds have, in a way, not been a surprise because of the Library’s mission to retain materials of historical significance. But I’m thinking back to the bound collections of prison newspapers I discovered on the Library’s shelves more than 30 years ago. Here were works assembled by some of the most marginal and forgotten Americans, yet the Library had the foresight to collect and preserve them. The most remarkable of these were the hand-cut stenciled pages of “The Prison Mentor,” a sample of which can be seen online.

What advice would you give to someone thinking about doing research at the Library?
When I come to work at the Library, I see hundreds, if not thousands, of tourists visiting the place, as if it were a static memorial to the past. Despite the efforts of docents, I’m not sure that these visitors—or the public for that matter—understand how alive the place is. It does not merely preserve the past but shares it with everyone in a most remarkably democratic and inspiring fashion.

I have conducted research in libraries and archives all across the United States and overseas. The gatekeepers of these places, particularly in other countries, often make it clear that one’s use of their facilities is a privilege. Not so at the Library of Congress. For its staff, the public’s access is a right, not a privilege. No matter who you are, the Library issues an open invitation to come in and learn. From books to documents, from music to movies, America’s story is here.

What are you working on now?
I’m writing a biography of the late writer Tony Hillerman, best known for his Navajo tribal police mystery novels. I anticipate it will be published in 2020.