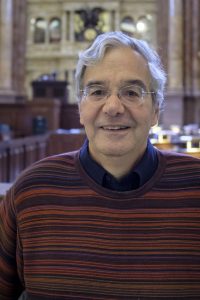 Peter Carlson is the author of three books of history, drawing much of his research from the Library’s collections. Each book mines a different era. “Junius and Albert’s Adventures in the Confederacy” is about two intrepid Civil War reporters; “K Blows Top” details Soviet premier Nikita Khrushchev’s tour of America in 1959; “Roughneck: The Life and Times of Big Bill Haywood” is the tale of the cowboy and silver prospector who became a founding member of the Industrial Workers of the World in the early 20th Century. A native New Yorker, Peter studied journalism at Boston University. Now a columnist for American History magazine, he has previously written for the Boston Herald American, People magazine and The Washington Post.

During his 22-year run at the Post, he was known for writing colorful yarns about cheerfully outrageous people. Or, as he describes it on his website: “…stories about cops and murderers and crooked pols and Arnold Schwarzenegger and the United States Senate and striking coal miners and Jerry Falwell, and wounded soldiers and a Virginia militia group and the 2004 Olympics and the guy who created Foamhenge, a life-size replica of Stonehenge carved out of Styrofoam.”

How did you get started writing?

I started writing shortly after I started reading Dr. Seuss books. I tried to write a Dr. Seuss book, complete with zany rhymes. A few years later, I created handwritten newspapers on looseleaf paper, filled them with fake news, and sold them to my neighbors for a nickel. Later, I worked on my high school newspaper, my college newspaper and then real newspapers. I’m pretty much useless for any activity except writing.

Your work so often features offbeat, larger-than-life characters. Is this a conscious choice? What sort of anecdotes are you looking for, and how do you know when you come across a great one?

I’ve always loved off-beat characters, perhaps because my father, who climbed poles for the Long Island Lighting Company, hung out with guys called “Rotten Socks” and “Shot-in-the Head.” They were wonderfully entertaining and funny. My father’s highest praise was to call somebody “a real character.” When I’m searching for a story, I look for “a real character”— or, better yet, two of them who are having some kind of conflict. Nikita Khrushchev, star of my book “K Blows Top,” is that kind of fabulous character, which made his 1959 tour of America—the topic of the book– a comic extravaganza.

How did you hear about Junius Browne and Albert Richardson, and how did you turn that into a book?

I got a job at American History magazine in 2011, which was the 150th anniversary of the start of the Civil War, so I suggested to an editor that we run a newspaper story from the war in every issue. He said, “That would be a good idea, but Civil War journalism was really lousy.” I thought, “Is that true?” So I read a book on Civil War journalism and came across a short version of the story of Junius and Albert’s amazing adventures covering the war for the New York Tribune and getting captured by Confederates. I followed the footnotes and learned that both men had written memoirs of their adventures, so I thought, “Aha! Primary sources!” Of course, I had to do a lot of other research, much of it in the Library of Congress, reading newspapers of the era and books about the battles they covered and the prisons they endured before they finally escaped.

How do you use the Library in your research? What’s your favorite story about finding something in the Library?

Mostly I read old newspapers in the newspaper reading room in the Madison Building, and old books in the fabulous Main Reading Room. But I’ve also ventured into the Rare Book Room and the Performing Arts collection.

When I was researching the book on Junius and Albert, I learned that while they were locked in a Confederate prison in Richmond in July of 1863, the Union prisoners celebrated the news of Grant’s victory at Vicksburg, which they read about in Richmond newspapers. I wondered: “Why didn’t they celebrate the victory at Gettysburg, which happened at the same time?” So I studied the Richmond newspapers that the prisoners were reading—the Library has the actual papers; they’re not on microfilm! — and I learned that the Richmond newspapers reported that the Confederates had won the battle of Gettysburg. “OUR ARMY VICTORIUS AT GETTYSBURG,” read the headline in the Richmond Examiner, “THE YANKEE ARMY RETREATING.” That’s why the Union prisoners weren’t celebrating Gettysburg—they thought they’d lost. And I never would have known that if not for the good old Library of Congress.

Any advice for researchers just getting started? The Library is so huge that it can seem intimidating.

Ask the librarians for help. They are incredibly knowledgeable and almost always eager to help you find stuff. Also, if you’re working in the Main Reading Room, there’s a tendency to get caught up in your work and forget that you are in the most beautiful room in Washington. Remember to pause periodically and gaze up at that magnificent dome. It’s such a privilege to work there. Enjoy it.

Lastly, what are you working on now?

I’m writing a column called “American Schemers” for American History. Each column is the story of a great American hustler. I write about con men, crooked pols, shameless hucksters, wayward preachers– colorful rogues of every stripe. The silver-tongued scam artist is an American archetype and the Library of Congress is chock full of their stories.