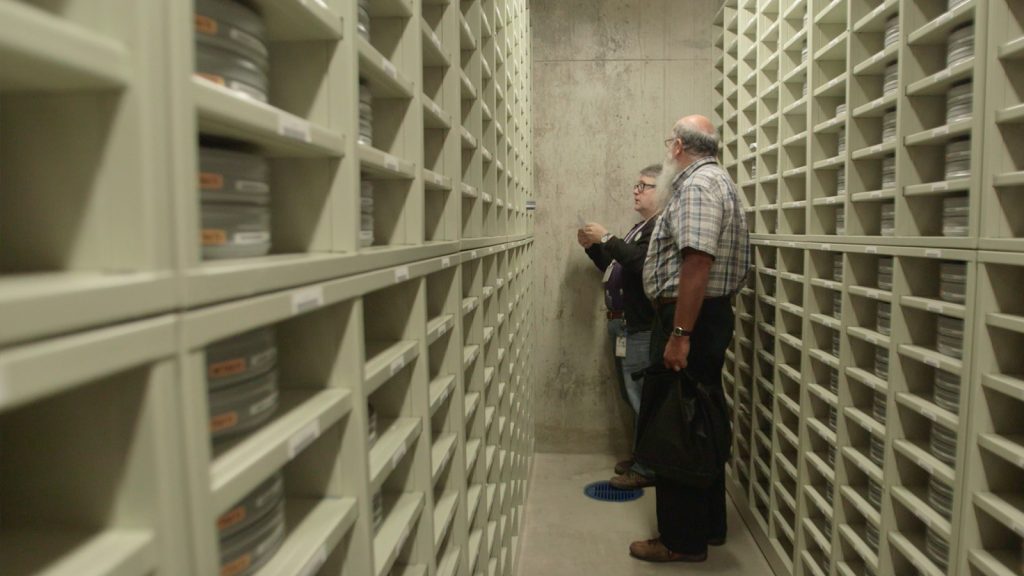 Most are just a few minutes long, and some last only a few seconds. But the movies at the center of a new documentary film, “Saving Brinton,” are treasures even so.

The film follows the journey of Mike Zahs of Iowa, a retired middle-school history teacher, as he travels near and far—including to the Library of Congress—to restore and preserve a collection of film from the earliest days of motion pictures. Zahs bought 35,000 feet of footage, fast decaying as a result of having been made on flammable nitrate stock, along with thousands of trinkets, handwritten journals, receipts, posters and catalogs, at a 1981 estate sale. All was once owned by William Franklin Brinton, the “barnstorming movie man” whose story Zahs uncovers as part of his quest.

Brinton toured small towns in the Midwest and Texas from about 1895 to 1910 showing movies he bought from production companies like Lumiere, Pathé and Edison. In church halls, opera houses and even tents, audiences watched motion pictures for the first time thanks to Brinton, viewing images as diverse as animals in the London Zoo, street scenes in Cairo and re-created bank robberies.

Here Andrew Sherburne, producer of “Saving Brinton,” answers questions about the documentary and the role of the Library of Congress in saving Brinton’s films.

What inspired Brinton to bring movies to the heartland?

Frank Brinton was a dreamer, an adventurer, a futurist. He toured the world, he tinkered with airships, he filed patents. And he shared this thirst for knowledge with his community, first with illustrated lectures on the Chautauqua circuit and later in his own touring show. He’d been using magic lantern slides already for years, so the invention of moving pictures would have immediately intrigued him. He was buying and showing films in Iowa by 1897, if not earlier. I think he was awed by this expansion of the mind, this opening of doors to the world beyond. He wanted to bring the world to Iowa, and film allowed him to do that.

How did you become interested in Mike Zahs and his effort to restore Brinton’s movies and legacy?

Mike had been showing these films annually to his small community in Ainsworth, Iowa (population 600) for over a decade. This got the attention of some folks at Humanities Iowa. They called us and said you won’t believe this amazing collection of films discovered just down the road. Sure enough, we were instantly fascinated by the films. Then once we met Mike, we realized there was so much more depth to this story and the way it threads through the fabric of time.

I understand that the Library helped to restore the original nitrate film soon after Zahs purchased it. How did that come about?

The Library of Congress became involved in 1981, when Mike was purchasing the estate of Frank Brinton from the Masson family, who had inherited it. The American Film Institute had been scouring the country for old films and had become acquainted with this collection. The films were beginning to deteriorate, so they were sent to the Library of Congress for preservation. The Library returned dupes of the films to Mike and kept the original cellulose nitrate reels in its climate-controlled vault.

More recently, the Library has supported the effort to created high-definition copies of the surviving original nitrate film. Can you tell us a little about that?

As part of this project, our film team worked closely with the University of Iowa and the Library of Congress to properly digitize the best surviving copy of all of the films within the Brinton collection (also known as the Masson collection at the Library). With the help of George Willeman and Zoran Sinobad at the Library, we identified the reels that were best suited for digitization. The Library then created high-definition scans of all of the black-and-white films. Collectively, we also made the thrilling discovery that some of the original films were hand-colored. These films were shipped to Colorlab in Rockville, Maryland, where they were scanned and restored. All told, there are now quality high-definition scans of over five hours of cinema from the 1890s and 1900s, including 14 films in color.

What has your experience been like working with Library staff?

We’ve worked with so many people on staff at the Library over the last three years. Initially with Mike Mashon and Sheryl Cannady to visit and film at the Library. With Rob Stone and Rachel Del Gaudio to show some of the Brinton films as part of the Library’s wonderful “Mostly Lost” film festival and to film there. With George Willeman to dig deep into the vaults and uncover the secrets of the collection. And with Ryan Chroninger, Rosemary Hanes, Zoran Sinobad, Jerry Hatfield and Laurel Howard on the task of matching up records with reels and thoroughly duplicating every frame of film we could find. Library staff members were instrumental in deciphering records, generous with their time and expertise, open to being a part of the story, crucial in helping us find our way and, more than anything, kindred spirits in their appreciation for these century-old films, giving their time and energy to the task of bringing these films back to life.

You note in your publicity materials that a rare Georges Méliés film was discovered in the collection in recent years. How did that come about?

There are over 120 films in the Brinton collection, and the vast majority were unidentified when we started. As we began the quest of identifying the films, some films immediately grabbed our attention. There are many magic or fantasy films in the collection. Some were immediately identified as well-known George Méliés films, and others we learned were by a Méliés contemporary named Segundo de Chomón who was working with Pathé films. But a few films eluded us.

Luckily, Brinton also left behind his film catalogs. We paged through the catalogs looking for descriptions that matched the unidentified films. When we found a synopsis for “The Triple-Headed Lady” that seemed to fit, we searched the known archives of Méliés films compiled by Lobster Films to see if it was an existing film. It wasn’t. Luckily, Serge Bromberg of Lobster Films was in attendance at “Mostly Lost” in 2014, and we also attended. There in the lobby at the Packard Campus, Mike showed the film to Serge. There was no doubt that this was exactly the missing Méliés we thought it was, as Serge excitedly proclaimed, “We have a new one!”

What are your favorite movies from Brinton’s collection ?

As much as I love the fantasy of Méliés and Chomón, or the comedies of Edison and Lubin, my favorite films are the actualities—films that documented life and events around the world. To me, these films represent the clearest window into the past: images from the other side of the world in India, Burma and the Ottoman Empire; exotic animals; the World’s Fair; president Theodore Roosevelt riding in a carriage down the streets of San Francisco before the earthquake; a mesmerizing trip by rail across the Brooklyn Bridge. In these films, I can feel a sense of pure wonder for the world we live in. It still resonates.

Here are two restored motion pictures from Brinton’s collection available on the Library’s website: “The Enchanted Glasses“ and “Chrysanthemums.” Both films were produced in 1907 by Pathé and directed by Segundo de Chomón.