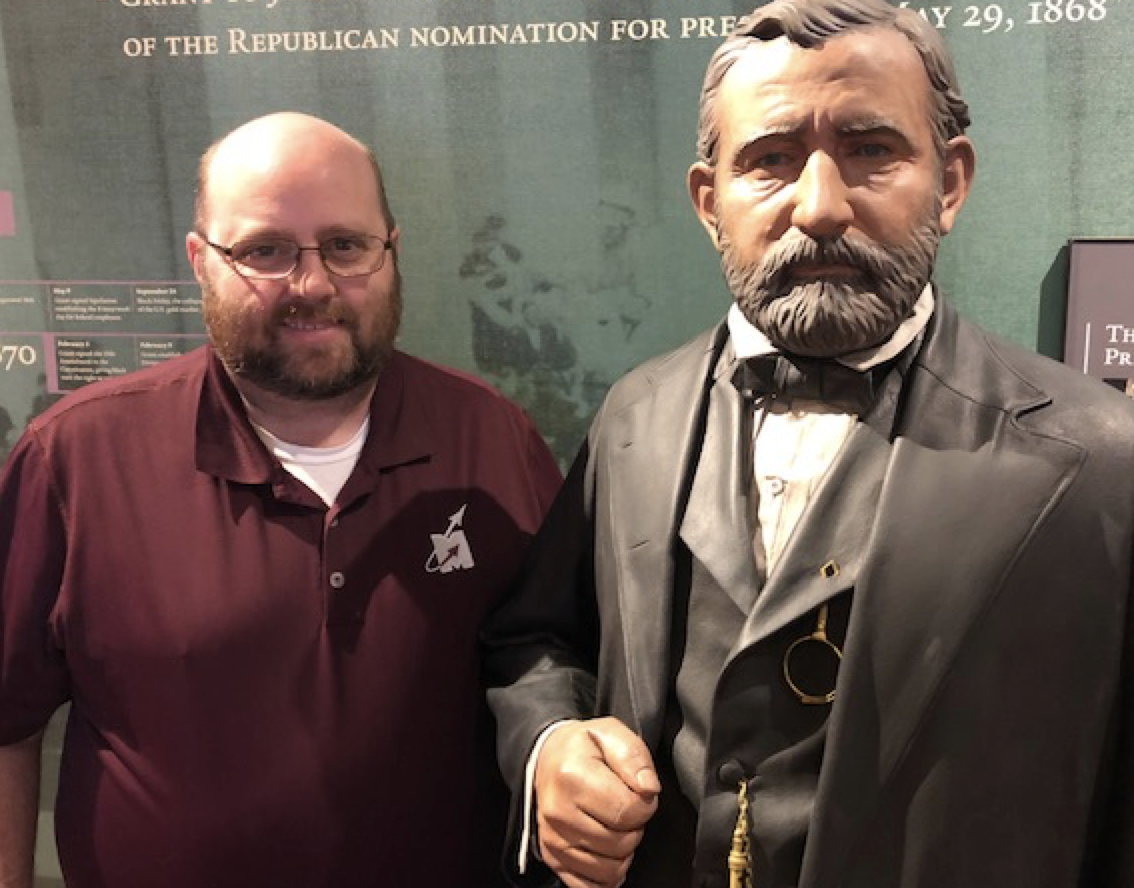 Ryan P. Semmes is Associate Professor and Coordinator of the Congressional and Political Research Center at the Mississippi State University Libraries. He has been on the faculty since 2007 and has worked as archivist with the Ulysses S. Grant Presidential Library at MSU since 2009. He is also a doctoral candidate in history at MSU, where he is completing his dissertation on the connections between foreign and domestic policy and the nature of citizenship during the Reconstruction era.

You were in the Library’s Manuscript Division recently. What were you looking up?

The Library’s 19th century holdings are phenomenal. I was looking at the journals of Benjamin Moran, who worked in the U.S. Legation in London from 1853 to 1874 and kept a daily journal. He unleashes a furious wit on his pages, tearing down the pompous and arrogant people with whom he worked and interacted. They are a wonderful resource and a delightful read.

How did you get started with Grant as the focus of your research?

When Grant’s papers moved to MSU in 2009, I was tasked with dealing with thousands of linear feet of documents that had accumulated over the years. One collection was a set of diaries written by Orville E. Babcock, former aide-de-camp to General Grant and his private secretary in the White House. Two of the diaries focused on Babcock’s mission to the Dominican Republic to assess whether or not the United States should annex it as a territory. I realized that I knew nothing about foreign policy during the Reconstruction era and I began to transcribe the diaries and research everything I could on Grant’s presidency.

I’m sure you get this all the time, but: How did a university in the heart of the former Confederacy wind up with the papers of the Union General who crushed the Confederacy?

All. The. Time. The collection is a result of over 50 years of editing work conducted by the late John Y. Simon and his team of historians and editors at Southern Illinois University. Dr. Simon also worked for the Ulysses S. Grant Association. Upon the death of Dr. Simon in 2008, and due to disagreements between the USGA and SIU, the decision was made to move the collection to a new university. The USGA chose Dr. John F. Marszalek as its new Managing Editor/Executive Director. Since Marszalek was at MSU, and MSU was willing to provide space, faculty, staff and financial support for the project, the USGA moved the collection to Starkville.

In the Grant Library, what are your favorite things to show people?

My favorite item is a letter written by Grant in the Spring of 1885, as he is dying from mouth and throat cancer (DO NOT SMOKE CIGARS!!) and writing his famous memoirs. He has a three-year-old grandson, U.S. Grant III, and Grant wants to make sure that the boy is appointed to the United States Military Academy at West Point, just as he and his oldest son, Fred, had been. Grant addresses the letter to “The President of the United States” not knowing who that would be. Two years after Grant’s death in 1887, the letter is endorsed by General William T. Sherman. In 1898, the letter is endorsed by then-president William McKinley, authorizing the appointment for the now 16-year-old USG III. It’s a great artifact featuring the signatures of two Presidents, a general, and the foresight of Grant to use his political clout to obtain a spot for his grandson (who went on to become a general in the U.S. Army himself).

The Civil War is always one of the top focuses of interest for Library users, if not in American history in general. Why does it continue to have such a hold on the American imagination?

We are very much still grappling with the legacy of the Civil War. The “unfinished revolution” of Reconstruction, as Eric Foner calls it, has shaped American politics, culture, and society throughout the 20th and 21rst century. Social justice movements of our own time, such as Black Lives Matter or the fight for fair treatment of immigrants, have their birth in the questions of the Civil War and Reconstruction. Who gets to participate in the American experiment? What constitutes a citizen? These questions are still being asked today. Conversely, the bigotry and hate that led to the Civil War and the end of Reconstruction is based on a false narrative known as the Lost Cause. The Lost Cause refers to the idea perpetuated by Southerners that Confederates were fighting for states’ rights and that slavery was a benign institution that was actually beneficial to African Americans. The children of Civil War veterans taught this narrative to their children, who taught it to their children, who are many of our parents’ generation. The shame of the legacy of slavery is one that many Americans are afraid to recognize, so they cling to tales of daring on the battlefield and high-minded notions of honor — neglecting or ignoring the horrible racism that led to secession.But the Civil War was about slavery, our ancestors in the South knew it, accepted it, and fought to perpetuate it. This great conflict is then memorialized in film, books, and music, which continue today.

Ron Chernow, the Pulitzer-Prize winning historian (and Grant biographer), was the keynote speaker at the opening of the Grant Library. At the end of his talk, he rapped the opening number from the Broadway musical “Hamilton,” which was based on his book. Should he keep the day job?

My wife and I were seated at a table near the front and it was fun to watch Ron read through Lin Manuel-Miranda’s lyrics. Lin has used the works of writers such as Chernow and historians like Joanne Freeman to great affect, so for that we owe them all a debt of gratitude. But I think Ron should stick to writing books and only rap under hip hop supervision.