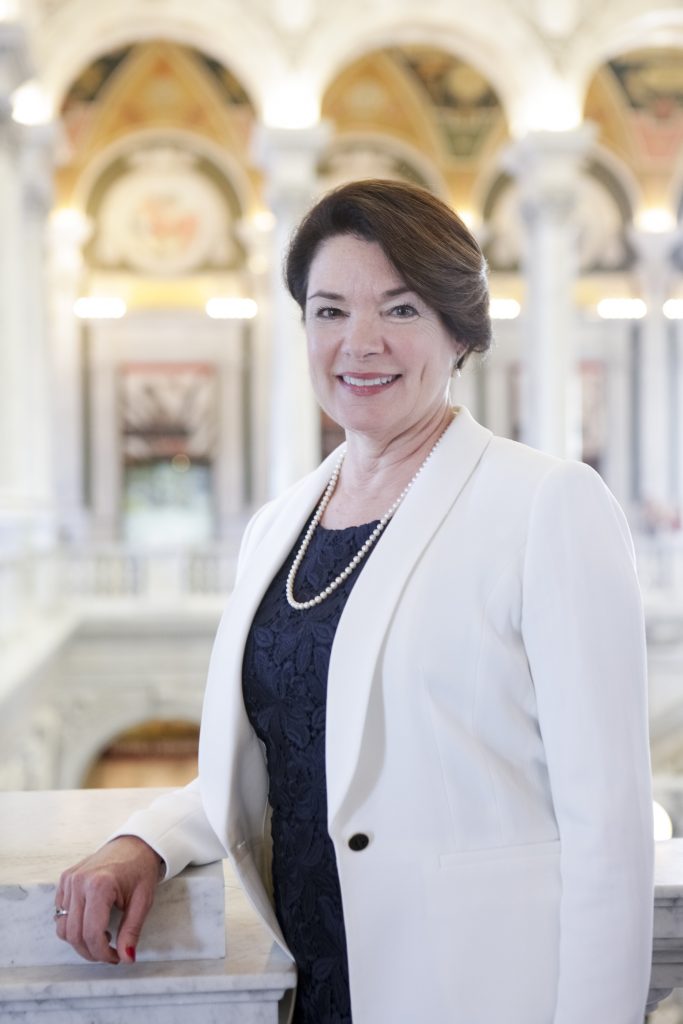 Daphne Geanacopoulos at the Library of Congress. Photo by Shawn Miller.

Pirate lore has long captivated us and, through the centuries, worked its way into our literature, movies and popular culture. But many depictions of pirates are wrong, distorting our understanding of them. So writes Daphne Palmer Geanacopoulos in her new book, “The Pirate Next Door: The Untold Story of Eighteenth Century Pirates’ Wives, Families and Communities.”

Geanacopoulos used newly discovered primary sources from the 17th and early 18th centuries, including documents at the Library of Congress, to correct long-held beliefs about pirate life and to bring to light the strong women behind men widely considered outlaws and outcasts.

Geanacopoulos is an author, historian and journalist. Her work has appeared in the New York Times, the Washington Post and other publications. She has a doctorate in liberal studies from Georgetown University with an emphasis in maritime history.

Here Geanacopoulos answers a few questions about her new book and her research at the Library.

I became interested in pirates when I wrote an article in 2002 for the New York Times about the Whydah Pirate Museum in Provincetown, Massachusetts. The Whydah was a pirate ship that crashed off the coast of Wellfleet, Cape Cod, in 1717 during a fierce storm. One hundred and forty-four men were on board; two survived. In 1984, Barry Clifford, a native Cape Codder and salvage expert, found the fabled pirate ship. For over 30 years, he and his dive team have excavated the shipwreck and have recovered over 200,000 artifacts.

While researching the article for the New York Times, I came across a fascinating primary source document about the pirates. It was a deposition from a runaway pirate, Jeremiah Higgins, who was caught by the authorities and thrown in jail in New York. He told the admiralty court he had been on one of the ships in the pirate flotilla that sailed with the Whydah up the eastern seaboard toward Cape Cod. Days before the wreck of the Whydah, the captain of Higgins’s ship, Paulsgrave Williams, veered away from the group and steered his ship to Block Island in Rhode Island. He wanted to go home to visit his mother and three sisters. Higgins reported that he remained onboard the ship while Captain Williams went ashore to see his family.

I was taken aback by this court testimony—a pirate going home to see his mother and sisters? And in a pirate ship, no less? Especially one painted yellow and blue with worn patched sails! It seemed like a very un-pirate thing to do.

I have long had an interest in issues concerning women, children and the family, and Jeremiah Higgins’s testimony made me realize that the story about pirates was not only about their seafaring exploits and stolen treasure, but also about their everyday lives and their relationships on land with the people they cared about—their families and communities. In one short sentence, Jeremiah Higgins gave me a gold nugget of information in what would later be a treasure trove that I compiled for my doctoral thesis at Georgetown University. My book, “The Pirate Next Door,” is based on the 15 years of research I did for my doctoral thesis.

Tell us a little about your book.

In “The Pirate Next Door,” I write about the wives, families and communities of four pirate captains from the Golden Age who were active from 1695 to 1720. Though pirates were active up and down the eastern seaboard of the United States and the Caribbean, I focus specifically on four pirates who operated in New England. This area was a hub of pirate activity, and I chose these four pirates in particular because they were all married (except Captain Samuel Bellamy, who had an “intended”). All interacted with each other at some point or another, and all of them were involved—in some cases quite actively involved—in the larger land-based community. These men are Samuel Bellamy of Cape Cod, Paulsgrave Williams of Block Island, and William Kidd and Samuel Burgess of New York.

While I focus on these four men, my research included the lives of 80 married pirates. Their stories help craft a picture of the wider world of pirates and the surprising sense of community these men often shared, inspiring us to take another look at the conventional image of pirate life

What collections at the Library did you use, and what was your experience like?

I spent days in the Manuscript Reading Room in the Madison Building. I also spent time in the Prints and Photographs Division. My experience was wonderful. There was always someone who could answer my questions. Or there was a resource I could use, such as a webinar through Patron Services, to figure out what I needed and where to find it.

I am a former congressional staffer, and one of my jobs was to send constituent requests to the Library. Magically, the answer or the documents would appear at my desk in very short order. I had no idea where in the Library the information came from. I only knew the Library from outside of the beautiful buildings. It was such an eye-opening and humbling experience to actually go into the different departments and do my own research. I am overwhelmed by the amount of information that is available in the Library. I have not begun to scratch the surface of what I can uncover for my research.

What were your most interesting discoveries at the Library?

I found an image of Captain William Kidd’s house in Manhattan, located at the corner of Hanover and Pearl Streets near the city wall that would be later be renamed Wall Street. The pen-and-ink drawing is from 1699, and I used it for the cover of my book. The three-story mansion actually belonged to his wife, Sarah, who inherited it from her first husband, William Cox. It is fascinating to see where one of the most notorious pirates in history lived with his wife and two daughters.

In the Manuscripts Reading Room, I found a fascinating document about Captain Kidd. It is an itemized list of the cost of maintaining a young boy and a young girl who were with him while he was in Newgate Prison in London. Kidd was held there for over a year while he awaited trial for murder and piracy. I had no idea that they were with him. I wondered, why were they there? The document listed the price of the girl’s dresses and shoes as well as the cost of trousers and shirts for the boy.

What finding in your book surprised you most?

The most remarkable thing my research has revealed is the role women played in the lives of pirates—a much larger one than has been acknowledged in previous pirate literature. I discovered that behind many a pirate was a strong woman on land.

Who is your favorite pirate wife and why?

I would say Sarah Kidd is my favorite pirate wife. Information about pirates’ wives is scant, but there is enough information about Sarah that I was able to piece together her life from an early age to her death. I admire her strength and grit. She was married four times, and Captain Kidd was her third husband. She went from a young 20-something New York socialite to a pirate’s wife and an accomplice to a man on the run from the law. What many people don’t know is that behind Captain Kidd was a very strong woman who pleaded, cajoled and bribed colonial officials to try to save her husband’s life. Their relationship was a real love story, and she was a remarkable woman.