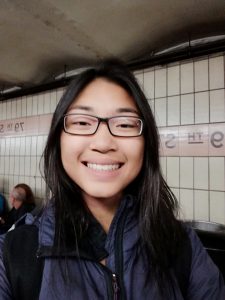 This is a guest blog post by Maya Mau, a 10th-grade student at West Windsor–Plainsboro High School North in Plainsboro Township, New Jersey. She is a national winner of the 2017–18 Letters About Literature contest, a reading and writing competition for students in grades four through 12 that involves reading a work and writing to its author (living or dead). Entries for the 2018–19 contest are now being accepted. Here Mau writes about her experience as a participant.

It was my ninth-grade language-arts teacher who announced that we would be writing letters – something that I hadn’t done since I was in elementary school. Specifically, we were to write a letter to the author of a book that had changed our lives. In the beginning, I was skeptical. The idea of a book that had changed my life seemed a bit far-fetched and lofty. So, naturally, I went about it the wrong way. I tried thinking of every single book I’d read that had had any discernable impact on my life.

Half-heartedly, I picked up a few books from the library. A week went by and I bounced from novel to novel, unable to decide on one.

Funnily enough, it was my sister, Maddy, who suggested that I should look at this assignment another way. Instead of trying to find a book first, she told me to think of something significant in my life. Immediately, my thoughts went to her. Because she had been born blind, a large part of my life is intertwined with Maddy’s, more so than some other siblings. It was then that I visited my own bookshelf. Now that I think about it, that should have been the first place I looked.

I saw Helen Keller’s “The Story of My Life” sitting between my math textbook and science fiction novel. Pulling it off the shelf triggered countless memories I had of reading and re-reading this book – of laying on the ground next to my sister and pouring over words that she helped me understand. I wondered why I hadn’t thought of Helen’s memoir earlier. Sometimes the most obvious choices are right under our noses, and it took me a while to figure that out.

My letter wrote itself after that. My sister and I have desks right next to each other in our “office,” so I frequently questioned her about everything I was writing about. She remembered how Helen’s book changed our relationship even better than I could. I pulled certain quotes from the memoir to enforce points in my letter and analyzed them, linking them to specific experiences I had with my own sister. My sister was by far my best critic. I also met with my teacher to go over my letter. After hours of peer editing, revising and spell-checking, my letter was sent in with the 24 other submissions from our class.

When my name didn’t show up on the semi-finalist list sent to my language-arts teacher a few weeks later, I pushed my letter to the back of my mind and continued adjusting to high school life. I eventually shared my finished letter with the rest of my family – it was the first time I had written about my experiences having Maddy as a sister, and I was excited to share Helen’s memoir with them.

You might be wondering how my letter reached the national competition if it hadn’t even passed the semi-finals for New Jersey. My teacher pulled me aside during class near the middle of the school year and told me that she had sent my letter back to the judges after the list had come out. It turned out that the judges simply hadn’t read my submission! They sent the letter on to the national judges, and I was announced as a national finalist.

The email sent to me informing me of my letter’s success showed up in my inbox during the school day, so it was my mom who told me about it after school ended. The first person I told after hearing the news was my sister – we were both super excited that everyone would soon be able to learn about how Helen’s memoir changed our lives.

This letter forced me to reflect on my relationship with my sister in a way that I had never really done before. It forced me to put my thoughts and experiences into words, which was hard at first. As I look back on my writing process and finished letter, I’m realizing more and more that writing the letter was for me more than anyone else. It helped me be more self-aware of how I was interacting with Maddy – a reminder of what I had read in Helen’s memoir all those years before.

But enough about me. Because last year was my first time submitting anything to this competition, there were so many things that I could have done differently to make the process smoother. Now that I’m rereading my letter after nearly a year since it was written, I’m still finding entire paragraphs that could be rewritten. I noticed some sentences that were unnecessary and others that were lacking. For students looking to enter this contest, it is so important that you start early. Don’t wait until a week before the submission deadline to go book-searching. This way, you can put your letter down for a week or so and visit it again later with fresh eyes. You’ll notice things you’ve never noticed before. To get another pair of fresh eyes, recruit a peer or teacher to look over your letter with you. Their feedback is invaluable.

Arguably the most important component of writing a heartfelt letter is finding a book that has actually changed your life. The first few I considered were very important to me, but they weren’t nearly as personal as Helen’s memoir. I learned lessons from them, yes, but I rarely used them explicitly in day-to-day life. With Maddy, however, I was able to apply what I learned from “The Story of My Life” every single day. No matter how well you write, the idea behind your letter is the most significant.

This contest is a brilliant way to bring literature and self-reflection together. Writing a letter about a book that has changed your life is more than just a submission to a contest – it’s a way to share what you’ve learned with the world.

The 2018-19 Letters About Literature contest for young readers is made possible by a generous grant from the Dollar General Literacy Foundation, with additional support from gifts to the Center for the Book in the Library of Congress, which promotes the contest through its affiliate Centers for the Book, state libraries and other organizations.