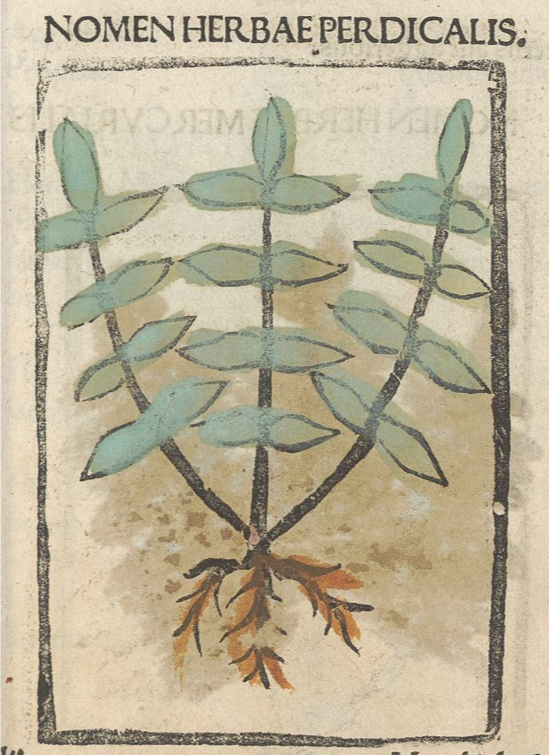 This intriguing look into the medical practices of Europe some 600 years ago was written by Andrew Gaudio, a reference librarian in the Researcher and Reference Services Division.

As the world grapples with containing the COVID-19 pandemic with a range of vaccines, each with varying rates of effectiveness, it’s worth remembering that cure-alls for deadly pandemics have often proven to be more of a mirage than a reality.

The Library’s collection of medical texts from the ravages of the bubonic plague in 14th -century Europe, known as the Black Death for the color of the swollen lymph glands it caused, are an uneasy reminder of this, showing that the best practices of the era would horrify us today.

Many of these volumes are found in the Rare Book and Special Collections Division. Also, some medieval medical texts have been edited and reprinted and can be found in the Library’s general collections. They offer a window into an earlier time when even the most sophisticated doctors lacked knowledge of germ theory and microbiology. Medieval physicians had little to work with other than their own observations and past experiences in treating different illnesses; a deadly virus like the plague simply overwhelmed them. Mortality rates for the most virulent forms of the disease were reportedly as high as 95 percent.

Medical reference journals of the time show “cures” that could have helped only a little, and in some cases greatly exacerbated their patients’ suffering. Plasters made of various herbs (including, we must report, excrement) were common as treatment for buboes, as the painfully-swollen sores were called. It was thought that the technique of “bleeding” a patient in a bid to remove excess blood would restore the balance of the humors or bodily fluids of the patient to its normal state. From ancient times up to the 19th century, it was thought that the bodily fluids consisted of four humors (black bile, yellow bile, phlegm and blood) and that health could only be achieved when all humors were present in the same proportions. Bleeding a patient removed an excess amount of blood and therefore was thought to restore the humors of the body to their proper levels.

The location of bloodletting was thought to be relevant to the ailment. In one reference volume dating to about 1410 — a sort of early almanac — the authors published a rough drawing of a “vein man,” detailing where and how to bleed a patient. Each vein and location on the body was provided with instructions as to how the bleeding should be carried out, depending on the medical problem. 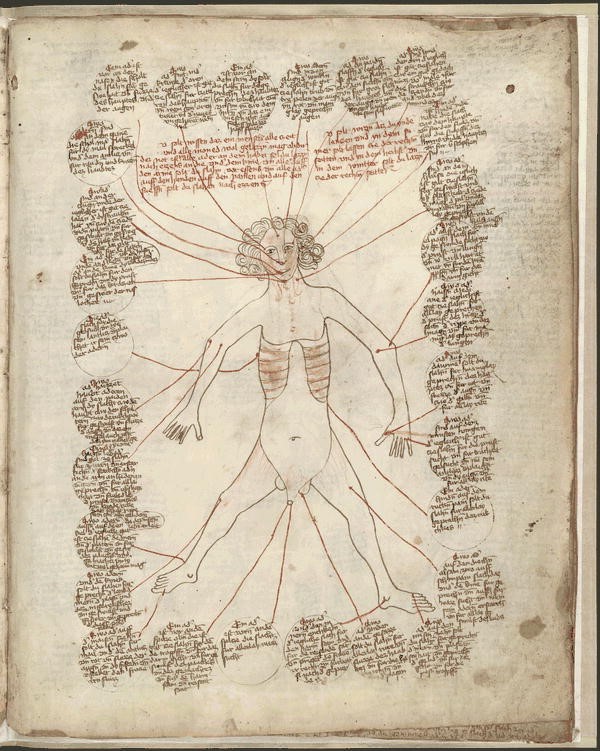 A “vein man” drawing from about 1410, published in southern Germany. Book and Special Collections Division.

In their quest for a cure, some doctors reported more success than others. French physician Guy de Chauliac, who was personal physician to Pope Clement VI, claimed that he was afflicted with the plague but had cured himself.

De Chauliac’s narrative of this event is found in “Inventarium sive chirurgia magna,” Latin for “The Inventory or the Great Surgery,” published in 1363. A modern printed edition of this text is available in the Library’s general collections.

Here’s his tale. The parentheticals are mine, to help modern readers understand the text.

Regarding a cure, venesection [bloodletting], purging [most likely an emetic or a laxative] and electuaries [medicine mixed with honey] and syrupy cordials were available. The external buboes were softened with figs and cooked onions ground up and mixed with yeast and butter. Afterwards, the buboes would open and were healed. The sores were bled by applying a cupping glass, sliced open, and cauterized.

And I, to avoid defaming my reputation, did not dare to flee. With constant fear I protected myself with the preceding methods as much as I could. Nevertheless, towards the end of this mortality [the plague], I developed a continual fever with a bubo in my groin and I was sick for almost six weeks, and I was in such danger that my friends believed that I was about to die. By softening and treating the sore, as I have said, I escaped death by the command of God.

This comes from the book “Canonical medicine: Gentile da Foligno and scholasticism,” by Roger French which is in the Library’s general collections. A prominent doctor in 14th-century Italy named Gentile da Foligno was famous for treating plague patients. He ultimately died of the plague in 1348 in his quest to help the sick. That is heroic, no doubt, but some of his recommendations will cause a 21st-century reader to raise an eyebrow.

Here’s one of his mixtures for a salve: extract from an umbelliferous plant (the parsley family, including carrots and celery), the root of a lily and human excrement. It could be that of the patient. These ingredients were to be mixed together and rubbed onto the bubo. Da Foligno thought that this concoction would aid in withdrawing fluids from the sores and would therefore reduce swelling. Needless to say, this concoction actually would have worsened the patient’s condition.

The use of plants and herbs for plasters and aroma therapy were common to the era. Guidebooks on medical plants, called herbals, identified and illustrated their uses and properties. These books were prevalent in the medieval period.

In “Herbarium,” a manuscript printed in Rome in 1481, a cure for gout is offered. The text, translated from Latin: “For gout in the big toe and gout in the knee. The peridcalis plant is boiled in water and with that water you will warm your foot or knee. Next you will place on your feet or knees the crushed plant [mixed] with hog fat in a cloth. You will heal remarkably.”