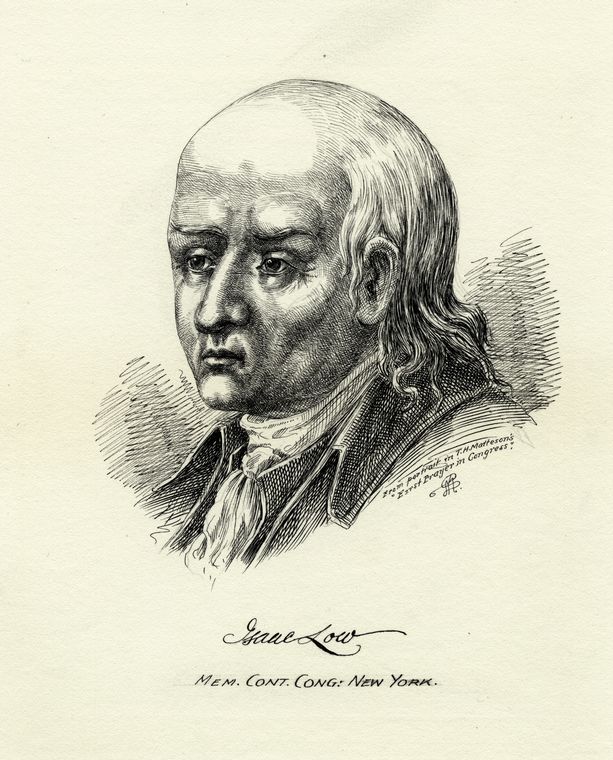 During the American Revolution, as many as one-third of American colonists remained loyal to Britain. These are the Tories we learned about in grade school, also known as loyalists.

Why did these Americans choose to remain British, and what did their decision cost them? The story told by a petition the Library recently acquired—addressed by New York loyalist Isaac Low on November 21, 1783, to the Loyalist Claims Commission in London—shows how one divided family struggled with these questions.

Born in New Jersey in 1735, Isaac Low was a prosperous New York City merchant. In the 1760s, as Americans became restive under British taxation and restrictions on trade, Low became active in the opposition. In 1774, he was a New York delegate to the first Continental Congress. As a merchant, Low was affected by the restrictions on trade, but he warned: “We ought not to deny the just Rights of our Mother Country. We have too much Reason in this Congress, to suspect that Independency is aimed at.”

When the Second Continental Congress met, the one that drafted the Declaration of Independence, Low did not attend. But he did participate ambivalently in several other patriotic bodies. The Manuscript Division has minutes of one of these, the New York City Committee of Sixty, which communicated with similar committees in other colonies and enforced boycotts of British goods. Low chaired this committee, but one of its members was suspicious of his loyalties. At a meeting held in April 1775, this unnamed member commented bitterly: “Mr. Lows non-attendance I ascribe to advices from England.” John Adams similarly believed that Low “will profess Attachment to the Cause of Liberty but his Sincerity is doubted.”

By the time the British occupied New York City in fall 1776, Low had made his allegiances clear and declared his loyalty to Britain. He remained in the occupied city, but when the British evacuated New York in 1783 and sailed for England, Low and his wife, Margaret, sailed too, joining their son Isaac Jr., who was already in London.

Low’s sisters, Gertrude and Sarah, had married two Irish-born brothers, Alexander and Hugh Wallace. Gertrude Low Wallace and Alexander Wallace, together with Hugh Wallace, left for Britain after the Revolution, but Sarah Low Wallace, Hugh’s wife, stayed behind, as did Nicholas Low, the brother of Isaac, Gertrude and Sarah. The Low and Wallace families preserved their bonds despite their political differences and wrote to each other for decades thereafter. Their letters are in the Nicholas Low Papers in the Manuscript Division.

Like other loyalists, Isaac Low’s property was confiscated by the Americans when he declared his loyalty to Britain during the revolution. The British parliament established the Loyalist Claims Commission to compensate loyalists for their American losses. Just before he left for England, Isaac Low drafted a petition to the commission—the one the Library recently acquired.

In it, he explains his history of shifting loyalties. He had always, he told the commissioners, “been warmly attached to the British Constitution.” For that reason, and to “continue a Member of the British Empire in America,” he had agreed to attend the Continental Congress as a delegate. He had believed that the “most worthy and respectable” of his fellow delegates wanted to “accommodate the unhappy Difference that then subsisted” between Britain and the colonies. But, to his “great Mortification and Grief,” his “Hopes and Expectations were all frustrated.”

Low details his service to the crown in occupied New York and gives a list of prominent men who can vouch for him. He describes his losses in a 1778 fire that caused great destruction in the occupied city. He was forced to throw goods “into the open Streets to preserve them from the Flames” and the fire consumed “several Thousand Pounds Sterling value in Anatta” (a red dye) that had been stored near the customs house dock waiting to be shipped to London. No longer bound by the boycotts he had once helped to enforce, Low was now trading with Britain from within the sanctuary of occupied New York.

After the war, Nicholas Low, in New York, provided material and moral support to his refugee relatives. He sent Isaac a pamphlet titled A Letter from Phocion. Phocion was Alexander Hamilton, as both brothers knew, since Hamilton was Nicholas’s lawyer.

Hamilton-as-Phocion argued that New York’s confiscation of loyalists’ property violated the terms of the 1783 Treaty of Paris. Isaac replied in an April 7, 1784, letter that the pamphlet did “honor to his [Hamilton’s] head and heart” but put him in danger of being “suspected of having changed his sentiments for what they will call Tory money.”

The progress of Isaac’s application to the commission can be traced in his letters to his brother in the Nicholas Low Papers. It took two years for the commissioners to decide on his application. When they did, he felt that the £1,700 they awarded him was “very scanty”—even though it was more than many others received, as historian Maya Jasanoff points out.

Isaac complained to Nicholas in an August 15, 1786, letter, “I must for the first time set myself down for a ruined man.” He blamed the commission’s decision on “malice whispered” by his enemies in a September 7, 1786, letter but also believed that “my having been in Committee and Congress, was a great stumbling block.”

When Isaac died in 1791, Isaac Jr. wrote to Nicholas on September 5 of that year that the “cruell treatment he experienced on both sides the Atlantic brought on an anxious mind, which hurried him to the grave.”

Gertrude Wallace appears to have been more resilient. On June 7, 1787, three years after arriving in Britain, she told Nicholas she was becoming accustomed to life there. “I could wish for a few of my old acquaintances,” she wrote, “but if it can’t be I must be content.”