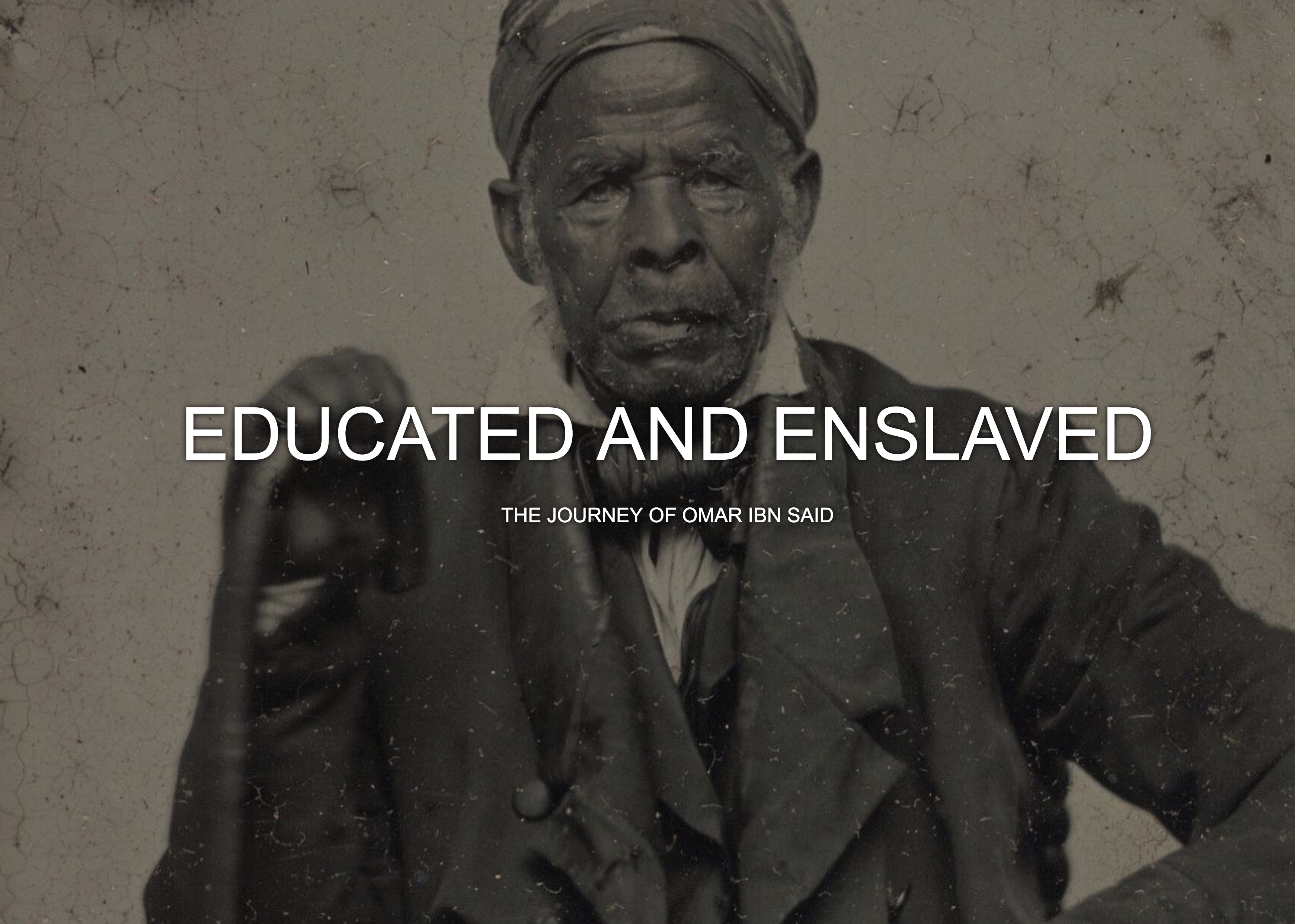 A portrait of Omar Ibn Said around the 1850s. Photo courtesy of Yale University Library. Opening image of the Omar Ibn Said project.

When the Library’s Omar Ibn Said Collection was put online earlier this year, the multi-national, multi-lingual story presented a challenge: How best to tell Said’s incredible journey? Born into wealth in an area known as Futa Toro (in modern-day Senegal) around 1770, he was an educated and respected man in his early 30s, a devout Muslim, when he was taken prisoner during a regional conflict and sold into slavery. He survived the middle passage in chains, was enslaved on a South Carolina plantation, escaped, but was recaptured in North Carolina. His eventual owners, a politically prominent family, treated him as a special case. He spent his last years as a well-regarded curiosity, often in touch with scholars. He died in 1863, still enslaved, during the Civil War.

Today, his 15-page, handwritten memoir — “The Life of Omar Ibn Said” – written in 1831, is the only known slave autobiography written in Arabic in the United States. It’s a window into a little-known aspect of the trans-Atlantic slave trade. At the Library, it is the centerpiece of a 42-document collection that fills out some of his life and the era in which he was subjugated.

Given this complexity, Benny Seda-Galarza, a public relations specialist in the Library’s Office of Communications, wanted to tell the tale with a Story Map, a multi-media platform that incorporates narrative storytelling, video, photography, maps, graphics and documents into a single interactive story. The result, “Educated and Enslaved: The Journey of Omar Ibn Said,” came out earlier this month. In June, the Veterans History Project used the same software to create “D-Day Journeys: personal geographies of D-Day veterans, 75 years later,” to tell the intimate stories of four soldiers who fought on that momentous day. These are two of the nine Story Maps that the Library’s staff have built since the projects began in 2018. Others include “Behind Barbed Wire,” about the newspapers that Japanese-Americans produced while in internment camps during World War II; “Maps That Changed Our World,” about the Library’s trove of historic maps; and “Incunabula,” about the history of printing in Europe during the transitional years of 1450-1500.

“We’re always trying to engage our users in a more creative way,” said Seda-Galarza, “and this enabled me to use copy, photos, video and graphics all in one place.”

That synthesis of material can be challenging, particularly since the Library is the largest storehouse of information in world history. That data – more than 165 million items, only a third of which are books — is spread over divisions, collections and databases. Some material might be digitized and easy to find online, or it might be on a tiny slip of paper, buried deep within a file in the Manuscripts Division. A key picture might be resting in a folder in Photographs and Prints, while an ancient manuscript might be in Rare Books. Nautical charts might be in drawer in Geography and Maps. Film? Try the temperature-controlled rooms, deep underground, at the Library’s Packard Campus of Audio-Visual Conservation in Culpeper, Va.

Megan Harris and Samantha Meier in the Veterans History Project headed up the “D-Day” project over a period of six months, digging up material “ranging from childhood photos to a pilot’s logbook, pen-and-ink sketches, an epic poem written in a foxhole a few weeks after D-Day, ticket stubs, and tourist maps” Harris says, to produce their quartet of stories. The “On D-Day” map alone, she notes, “took over 60 hours to complete.” 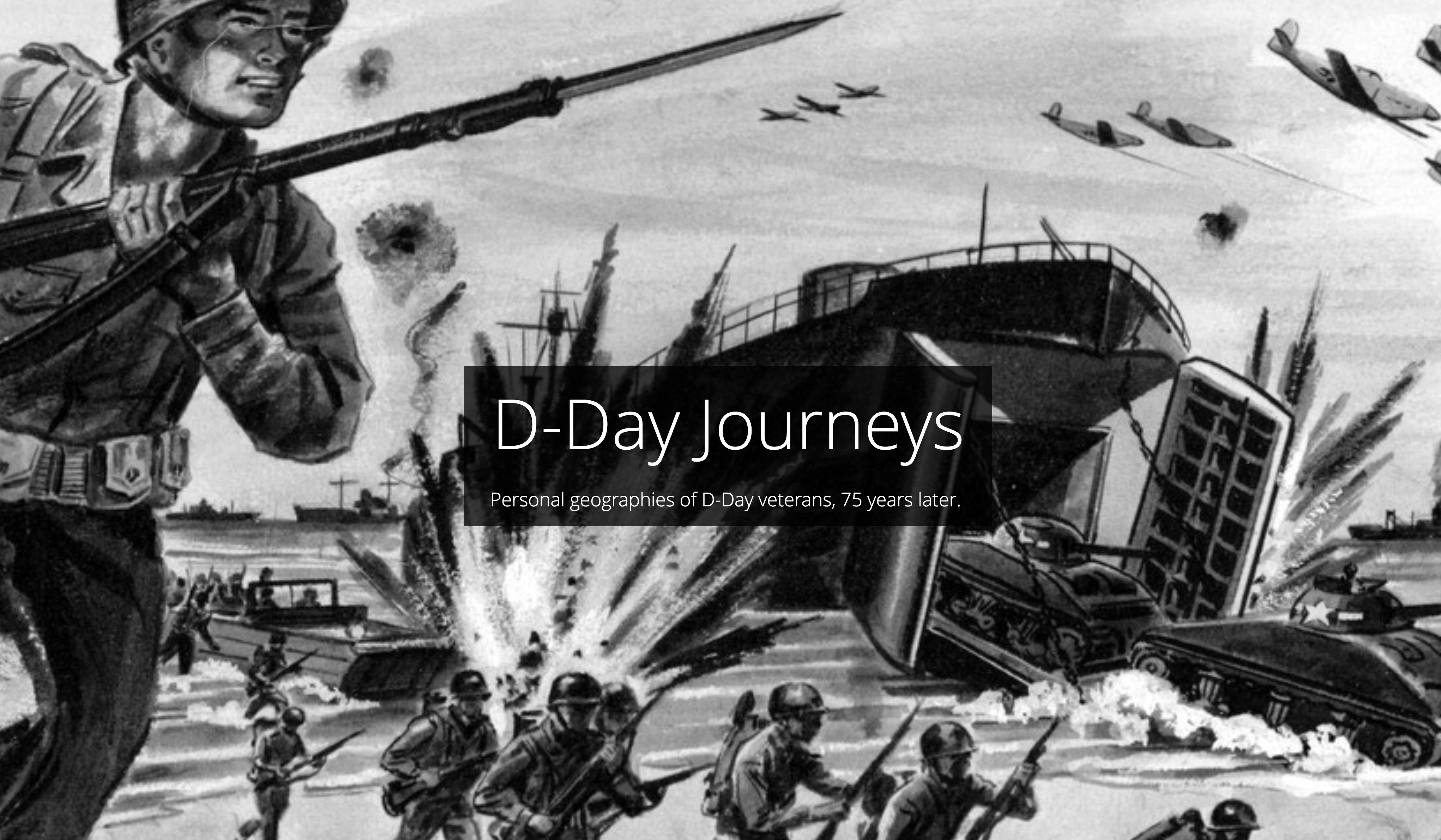 To produce the Omar Ibn Said project, Seda-Galarza worked with experts in six different divisions. Library photographer Shawn Miller shot and edited a video of the conservation work that went into preserving Ibn Said’s papers. The result pulls together 18th-century maps of Africa, 19th-century maps of the United States, quotes from Ibn Said’s autobiography, photographs of the man himself, different translations of his narrative, and letters written by (or to) Theodore Dwight, a founder member of the American Ethnological Society who played a key role in collecting Said’s work.

There’s also the final poignancy: Though Ibn Said fared much better under his North Carolina owners, he never regained his freedom. “I continue in the hands of Jim Owen who does not beat me, nor calls me bad names, nor subjects me to hunger, nakedness, or hard work,” he wrote, late in life. “I cannot do hard work for I am a small, ill man.”

Perhaps his physical stature was such at the time. But, more than 160 years later, his story lives in larger-than-life fashion.