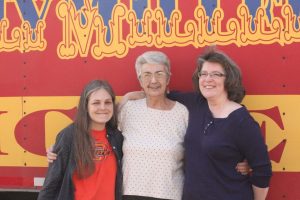 This is a guest post by Stephen Winick of the American Folklife Center. It was first published on the center’s blog, Folklife Today. A companion post about circus life in Hugo, Oklahoma, is available here.

The American Folklife Center (AFC) is delighted to announce the online presentation of an important new oral history collection documenting the lives and careers of multigenerational circus workers in Hugo, Oklahoma. “The ‘Big Top’ Show Goes On: An Oral History of Occupations Inside and Outside the Canvas Tent” was created by librarians Tanya D. Finchum and Juliana Nykolaiszyn.

In 2011, Finchum and Nykolaiszyn, of the Oklahoma Oral History Research Program at Oklahoma State University’s Edmon Low Library in Stillwater, Oklahoma, received an Archie Green Fellowship from the American Folklife Center to research and document oral histories from multigenerational circuses, circus workers and circus families in Hugo, Oklahoma. For several generations, Hugo has been a “wintering over” town for small, family-owned circuses. Many of its current residents are working, semi-retired or retired circus workers. Circus references are found throughout the municipality, from store signs to gravestones.

In the course of numerous research trips to Hugo, Finchum and Nykolaiszyn recorded 24 interviews with circus workers, most of whom had worked a variety of different and colorful jobs during their circus careers. The fieldworkers also obtained digital copies of historical photographs, including images from the Carson and Barnes, Culpepper and Merriweather and Kelly Miller Circuses, and photographed circus-inspired tombstones at the local cemetery, Showmen’s Rest. The resulting collection — which also includes audio files from eight short “Then and Now” programs produced by the fieldworkers and broadcast by KOSU public radio in 2012 — is now part of the Library of Congress’s permanent collection. 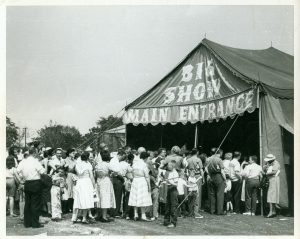 A crowd lines up to see the Al G. Kelly and Miller Bros. Circus. Undated. From the collection of Michael Fulton.

“The ‘Big Top’ Show Goes On” is part of a multiyear AFC project to document workers in contemporary America. Over the past eight years, supported by AFC’s competitive Archie Green Fellowships program, more than 40 researchers and research teams throughout the United States have received funding to document oral histories with workers in a wide variety of trades. Interviewees include ironworkers, hairdressers, electricians, home health care workers, longshoremen, funeral home employees, gold miners, racetrack workers, tobacco farmers and many more working Americans from all sectors of contemporary society.

Through the AFC’s ongoing Occupational Folklife Project, oral histories of hundreds of American workers — stories of how they learned their trades, their skills and work routines, legendary jobs (good and bad), respected mentors and flamboyant co-workers and their hopes for their futures — are now part of the national record. These oral histories not only enrich our current understanding of our fellow Americans, but will inform scholars and researchers for generations to come about the lives of contemporary workers at the beginning of the 21st century.

As AFC Director Betsy Peterson notes, “With the launch of AFC’s innovative [Occupational Folklife Project], researchers and members of the public will have direct access to hundreds of hours of compelling fieldwork. They will be able to hear the interviews and view fieldwork images and documentation that previously could be accessed only by visiting the Library in Washington.”

“The ‘Big Top’ Show Goes On” is a particularly compelling collection. As project co-director Nykolaiszyn notes, “The interviews in this collection not only shed light on the nature of circus work, but also amplify the historically marginalized voices of showmen and women.”

And, Finchum adds, “The traveling tent circus is like moving a small city 200 times a year and, as such, operates as a well-oiled, orchestrated unit. These interviews invite ‘towners’ into the back yard of a traveling tent circus community, and reveal that ‘running away to join the circus’ does not translate to an easy life. Still, these family circuses continue to bring people of all ages, from all walks of life and from all corners of the world together for a few hours of shared entertainment.”