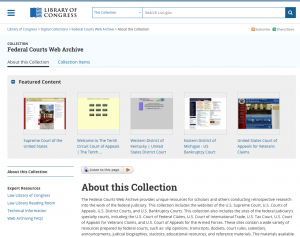 This is a guest post by Andrew Winston, senior legal reference librarian, and Brian Kaviar, a Law Library intern. It was first published on “In Custodia Legis,” the blog of the Law Library.

The Federal Courts Web Archive, recently launched by the Library’s web archiving team and the Law Library, provides retrospective archival coverage of the websites of the federal judiciary. The websites in this archive include those of the Supreme Court of the United States, as well as federal appellate courts, trial courts and other tribunals. Coverage generally begins in April 2014, although records from individual courts were captured at different times, and some earlier records are included. The archive is the only comprehensive coverage done court-by-court for the U.S. federal court system.

Here are the types of cases heard by these federal courts.

To learn more about federal courts, the cases they hear and how the work of the federal judiciary is performed, we recommend visiting USCourts.gov.

Court websites support the activities of a number of participants in the judicial system, including attorneys and their clients, pro se litigants seeking to represent themselves, jurors, visitors to the court, and community outreach programs. In meeting the needs of these different groups, court websites generate a number of resources, including (among many others) the following.

The Federal Courts Web Archive provides a fascinating look at the business and operations of the nation’s federal courts and how their websites have developed to respond to technological changes and the use of online resources in the practice of law. We invite you to review the archive, as well as other Library of Congress web archives that include legal and legislative materials, like the International Tribunals Web Archive, the Legislative Branch Web Archive, and the Legal Blawg Archive.

The Library has been archiving select websites since 2000 and has now preserved more than a petabyte of web content, including collections of federal executive, legislative and judicial websites; sites of international governments; and national institutions such as the U.S. Olympic Committee and the American Red Cross.