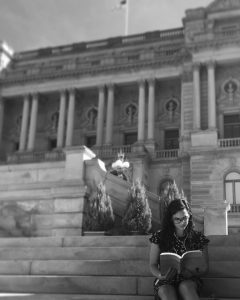 This is a guest post by Cataline Gómez, a reference librarian in the Hispanic Division. It was first published on “4 Corners of the World,” the blog of the Library’s area studies divisions.

A listener enjoys a selection from the archive last month while sitting on the steps of the Library’s Jefferson Building. Photo by Catalina Gómez.

To celebrate National Hispanic Heritage Month this year, the Library released new digital material on the Archive of Hispanic Literature on Tape. For the past three years, we have provided online access to a growing number of recordings through the archive’s portal. The launch of 50 new recordings adds to the existing digital archive of prose writers and poets from all over the Americas and Spain and Portugal reading from their works.

The archive is a historical collection of close to 800 audio recordings of Luso-Hispanic writers. Since its inception in 1943, curators in the Hispanic Division have continued expanding on this project by recording, in the Library’s recording lab and abroad, some of the most important writers and poets of the 20th and 21st centuries. Our efforts to digitize this collection are ongoing; with the 2018 launch, there are now 200 recordings available via online streaming.

This launch includes recordings from the 1950s onward, with many sessions recorded in the past five years. Reflecting the regions’ immensely rich cultural and linguistic diversity, the list includes the literatures of nations such as Haiti, Cuba, Spain, Colombia, Panama, Puerto Rico, Chile, Argentina and more. It also includes, for the first time, recordings of works in indigenous languages, such as the recording of Mexican scholar Ángel María Garibay (1892–1967), who reads Aztec poetry in Nahuatl and Spanish; Mexican writer Andrés Henestrosa (1906–2008), who reads works in Zapotec, a pre-Columbian language from Oaxaca, Mexico; and poet Andrés Alencastre (1909–84), who reads verses in Quechua, the language of the Inca Empire. Another linguistic gem included in this release is a reading by Spanish writer Unai Elorriaga (1973– ) in Basque or “Euskara,” a Pre-Indo-European language spoken in northern Spain.

We hope you enjoy these literary treasures! Below is the complete list of newly available recordings: