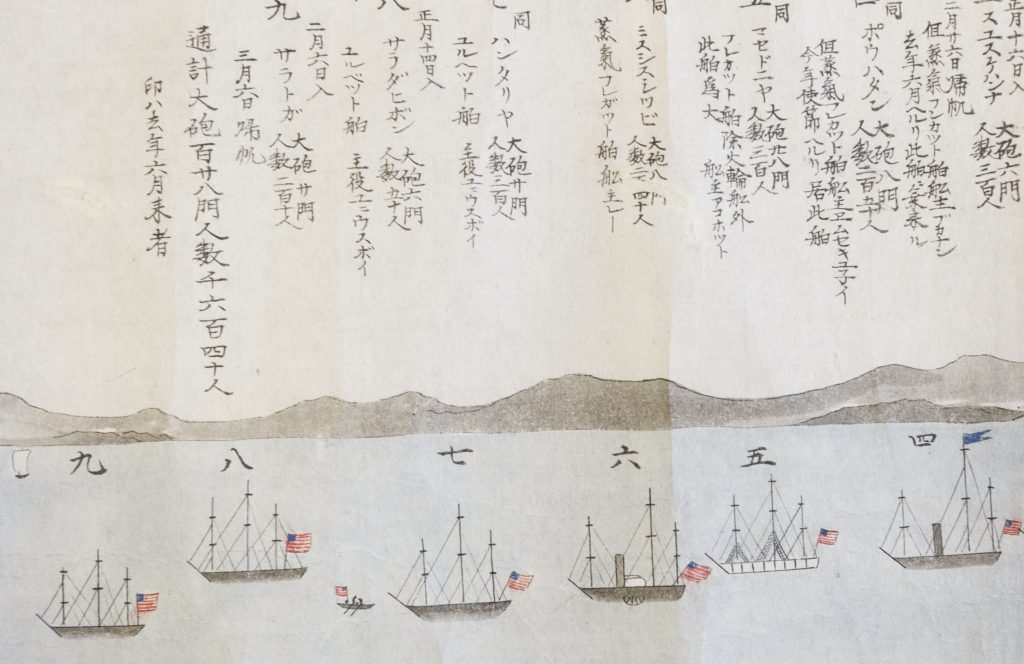 The Black Ship scrolls are a genre of Japanese paintings that captured the historic meeting of two alien cultures: That 1854 moment when U.S. Commodore Matthew Perry barged into Edo Bay with four American steamships, guns at the ready, to negotiate a treaty with a Japanese government that had been almost completely isolated for two centuries.

It was an astonishing moment. Perry insisted he was bringing “civilization” to “heathens” who had expelled Christian missionaries early in the 17th century. To the Japanese, Perry’s crew were “barbarians” and their black-hulled steamships, billowing black smoke, were monstrous behemoths from another world. 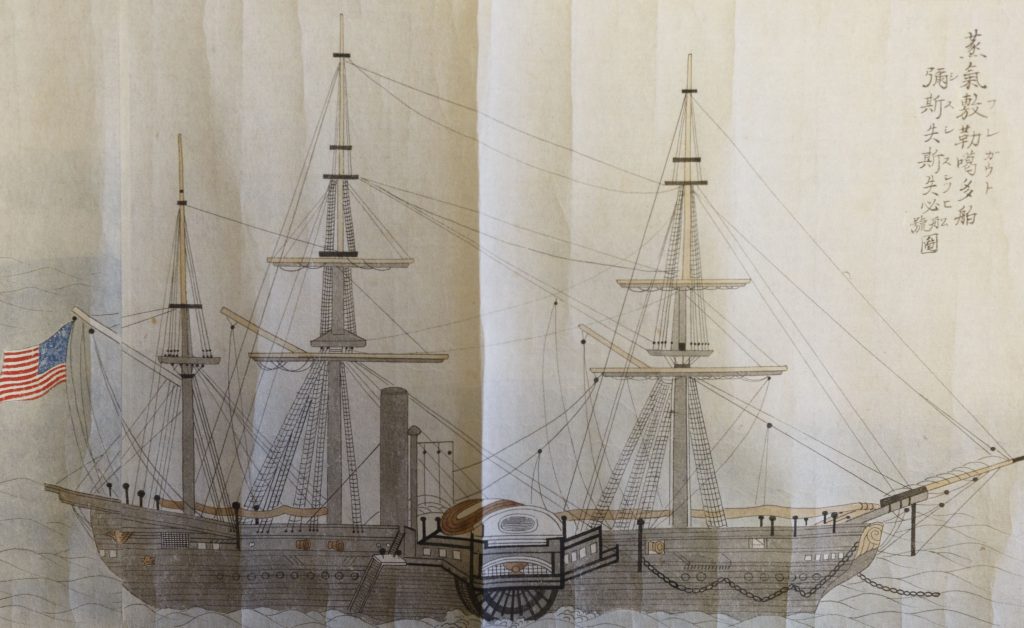 One of the most famous depictions of those tense days is “Kinkai kikan,” (“Strange View off the Coast of Kanagawa,”) by Otsuki Bankei, a Japanese artist, scholar and educator who was commissioned by a regional official some 200 miles away to record the encounter. Bankei’s report, put together with the help of two assistant painters, was a pictorial scroll that was nearly 38 feet long — 30 sections of rice paper, delicately glued together, depicting 20 scenes from the Americans’ four-month stay. Wrapped around a spindle and stored in a small wooden box for most of the past 150 years, it was recently acquired by the Library from a rare book dealer in New York and is not yet on public display. It is that rarest of things: the moment of contact between two cultures, separated by a vast ocean, recorded in the hand of an artist who was at the scene.

“What distinguishes this scroll from most others in the genre is that it has a clearly identified creator,” says Cameron Penwell, Japanese reference librarian in the Library’s Asian Division. “Bankei firmly sided with the view that the Japanese should pursue diplomatic relations with Western countries.”

The Americans’ intimidating arrival had been preceded by a short visit a year earlier. U.S. President Millard Fillmore had dispatched Perry with an audacious plan — to open up Japan to a relationship with the United States. Japan, though, had been sealed off from much of outside world for nearly 200 years. The nation’s foreign contacts were limited to a carefully regulated trade with Korea, the Ryukyu Kingdom (today’s Okinawa), and the Dutch. Even so, the Dutch were restricted to a single trading post on a small island in a bay in a distant part of the country. They were seldom allowed on shore. The Americans were so ignorant of life in Japan that they believed the emperor ran the country, unaware that he had long been reduced to a figurehead by the Tokugawa shogunate.

In this environment, on July 8, 1853, Perry sailed into Uraga, a fortified inlet off the entrance to Edo (now Tokyo) Bay, with two paddle-wheeled steamships and two sloops, both heavily armed and both far superior to any Japanese weaponry. Perry demanded that a delegation take a letter from Fillmore to the emperor. If they wouldn’t, Perry intimated, he would. It was gunboat diplomacy in its most basic form, but the Japanese recognized that they were outgunned. They accepted the letter and told Perry to come back the following year for a reply.

When Perry returned, it was with a far larger show of military muscle. This time, his fleet consisted of nine ships (four of them steamers) and nearly 2,000 sailors. They sailed directly into what is now Tokyo, pushing past smaller Japanese boats that attempted to keep them out. They sank anchor and ignored warning shots.

It worked. Perry was allowed to come on shore, negotiate with emissaries and stay for several months, signing the landmark Treaty of Kanagawa on March 31, 1854. Japan would no longer be a closed country. It was a major turning point in international affairs.

In this hubbub, Bankei and other artists — some professionals, some amateurs — sketched away. Japan did not have photography, so the paintings were the only visual records of the event. 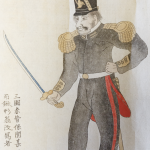 “On the Japanese side of things, this was quite a sight,” Penwell says. “They had never seen steam-powered ships before, and these were loaded up with artillery. The Americans made a show of it. The message was ‘We’re here, and we mean business.’ ”

Perry, in his memoirs, later wrote that his hosts “were constantly taking out their writing materials, their mulberry-bark paper, and their Indian ink and hair pencils, which they always carried in a pocket within the left breast of their loose robes, and making notes and sketches.”

For his part, Bankei began his scroll with calligraphy, explaining the situation. He then turned his brush from words to pictures. He started with a panorama of the bay, in light blues and greens, depicting Perry’s fleet off the shore of Yokohama. Then he painted and described each ship — the Powhatan, the Mississippi, and so on. The next panels portray the Americans coming ashore in small boats, marching in formation and greeting Japanese dignitaries. Ever the journalist, he even sketched out the seating chart at a formal dinner. 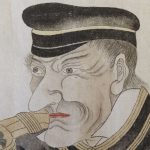 Finally, he painted portraits of the American leaders, a few soldiers, and depictions of their uniforms. Many of the portraits were unflattering. The Americans appear in two dimensions, with enormous noses and dull eyes, almost caricatures. Perry was dismissive, calling much of it “exceedingly rude and inartistic.”

Still, Bankei’s rice-paper scroll catches the two cultures on the cusp of vast social changes, in his own hand, as it is transpiring in front of him. As art, it is invaluable reportage; as reportage, it is delicate art.