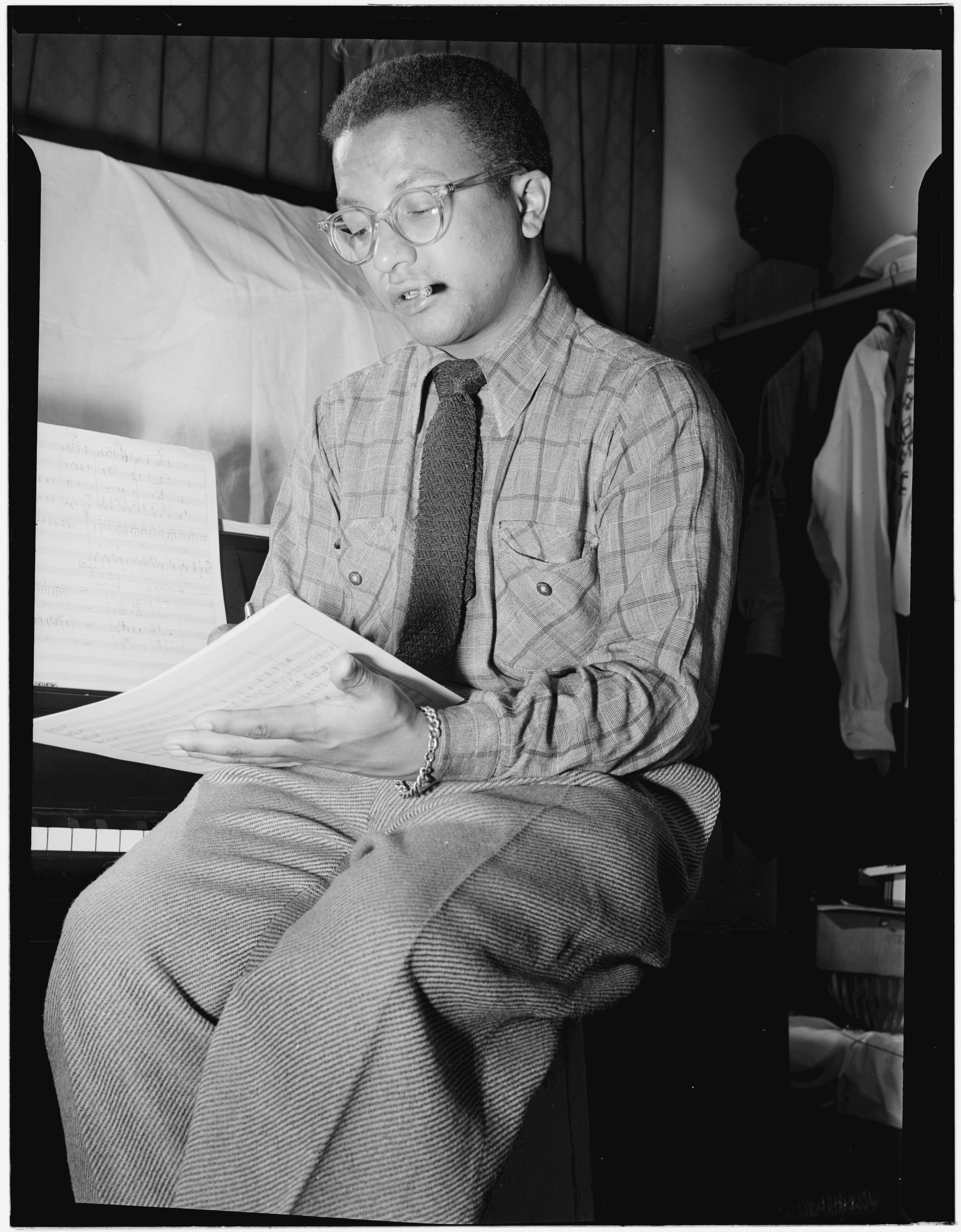 The following is a guest post from saxophonist Chris Potter, who participated in the Music Division’s Finding Strayhorn discussion panel on June 12, 2019. It was first published on our In the Muse blog. We are reposting it here because Billy Strayhorn is Billy Strayhorn.

My visit to the Library of Congress fortunately coincided with the announcement that the BillyStrayhorn Music Manuscripts and Estate Papers are now available for the public to study. I was very honored to be invited to look over his archives, contribute to a panel discussion called Finding Strayhorn, and perform some of his music.

My time at the Library started with the rare opportunity of trying Gerry Mulligan’s baritone saxophone, one of the few times someone has played it since his passing. I was fairly daunted by the task, considering all the beautiful music that has come out of that horn; also I have only attempted to play the baritone saxophone a handful of times in my life. Nevertheless, I did my best, using Gerry’s own mouthpiece, and found that the instrument setup lent itself to a lovely, mellow, “Mulligan-esque” tone. Perhaps I’ll have to spend some more time on the baritone in the future.

The bulk of my time in DC was spent studying Strayhorn’s archives, which are astonishingly vast. To have the original scores in front of me for pieces like “Take the A Train” and “Chelsea Bridge,” as well as full scores and lead sheets for hundreds of other pieces, was truly a revelation. 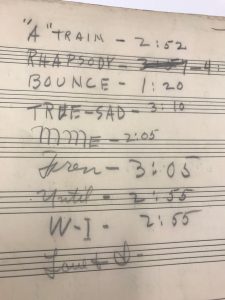 To see the confidence in his handwriting and the full command of form and orchestration he possessed, is to feel oneself in the presence of a true master, speaking across the years and saying, “See, kid, this is how it’s done!” Among some of the details that caught my attention was the specificity of how voices were assigned; it’s always been said that Ellington wrote for specific members of the band, and that clearly went for Strayhorn as well. Surprising to me, this practice did not only apply to solo parts, in some cases this extended to how chords were voiced. For example, on the last minor triad of “Solvejg’s Song” from the arrangement of the Peer Gynt Suite, it is specified that the top trumpet note should be played by Ray Nance and the trombone note should be played by Booty Wood. In addition, the saxophone section is assigned in many different ways, with the baritone player Harry Carney often having his own staff as opposed to the rest of the sax section being assigned to a different staff, so that the baritone’s movement is often independent of the rest of the section, and sometimes occupies the lead voice. I noticed many instances where the “rules” of smooth big band orchestration were broken, which in this master’s hand created those lush indefinable musical textures that I’ve always known and loved. 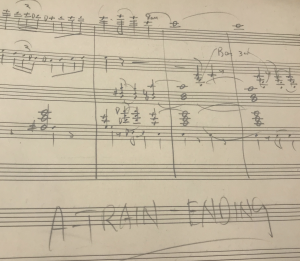 There has been much discussion over the years concerning exactly what Strayhorn’s contribution was to the Ellington sound. The material in these archives makes it clear what a major artist Strayhorn was in his own right. The artistic and personal relationship between the two men was clearly very complicated and nuanced (I strongly recommend reading David Hajdu”s biography “Lush Life” for more information), but from an aesthetic viewpoint, the fact that that these two musical giants met and worked together for many years, with an orchestra of some of the most beautiful unique instrumental voices on hand to bring their musical ideas to life, is nothing short of a miracle, and the work they left us is a true gift to humanity.

My visit culminated with the panel discussion Finding Strayhorn, which included Billy Strayhorn’s nephew Gregory Morris and niece Alyce Claerbaut, along with the aforementioned author David Hajdu as well as noted Strayhorn scholar Walter van de Leur (special thanks to Walter for his help in the reading room helping me decipher what it was I was looking at in those handwritten scores!). The incomparable Larry Appelbaum was the moderator of the event, and I performed solo saxophone versions of several of my favorite Strayhorn compositions: “Lush Life,” “Take the A Train,” “Blood Count,” and “Rain Check.” The event will be streamed in full on the Library’s website and YouTubechannel in the coming months, but for now you can watch my performance in the following clip:

It was a wonderful way to cap off an inspiring trip to the Library of Congress, and a great way to show our appreciation for one of the most gifted artists this country has produced.

I strongly recommend that people interested in jazz and American music take advantage of the resources available at the Library of Congress; there is an incredible amount of material available for those who are interested in the rich musical tapestry our country has produced. Being in the presence of the actual items made by these artists is an indescribable feeling. 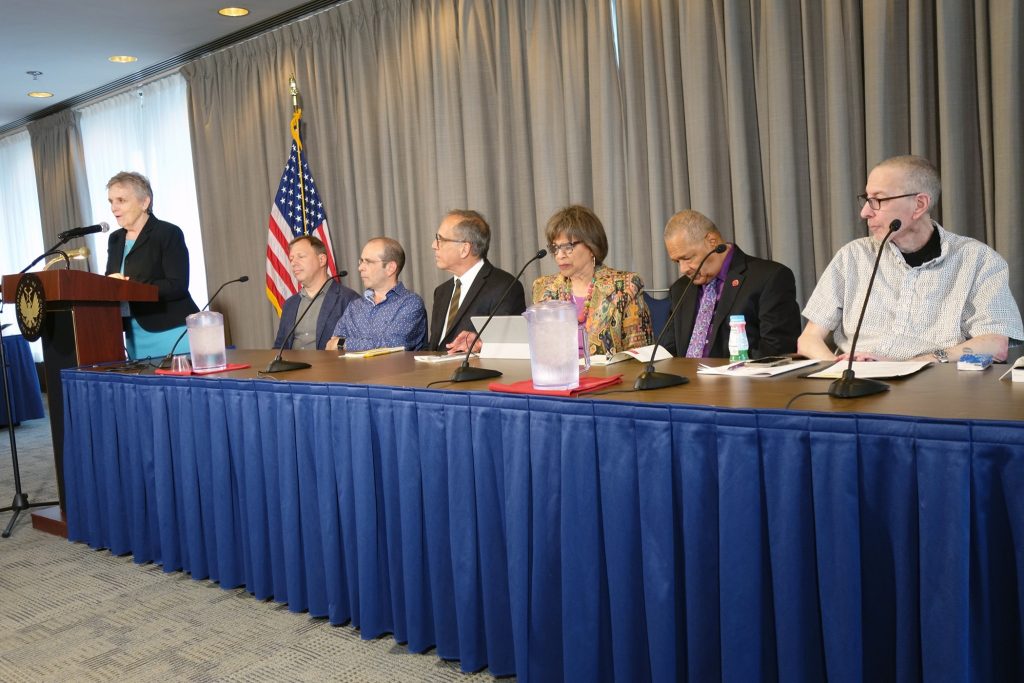