The following is a guest post by Owen Rogers, liaison specialist for the Veterans History Project. An extended version of the post appeared on the Library’s “Folklife Today” blog.

When Burton “Burt” Schuman greeted me at the door with a handshake and an offer of a home tour, he shared his framed Bronze Star Medal and a photograph of himself as a young GI whose smile belied the worn leather of his boots and rifle sling. I had questions about those. But it was the mezuzah on his doorframe that prompted my first and most personal question. Schuman was one of the half million Jewish Americans who served in the U.S. Armed Forces during World War II and a veteran of the European Theater of Operations.

Schuman ushered me to his basement art studio, where countless images of ducks and marsh life wreathed the walls. He explained that he started developing his artistic talents in college and continued during World War II.

With only one year of coursework under his belt, Schuman became the head cartographer in the G-3 section of the 100th Infantry of the U.S. Army’s “Century” Division. His responsibilities were vast, as he plotted the movement and positions of 100th Infantry forces, developing maps drawn from frontline reports and his own scouting of friendly positions. In our modern era of mobile GPS maps and pin drops, it’s hard to imagine an entire division relying on “maps mounted on four-by-eight plywood . . . on stands . . . [and] on a two-and-a-half ton truck,” as Schuman recounted. For two years, Schuman made that “deuce-and-a-half” [truck] his home.

Although his wartime experiences included encounters with personalities such as General George Patton and Marlene Dietrich, as well as a harrowing 13-hour flight toward friendly lines after his jeep was shot from under him, it was mention of the mezuzah that sparked his most emotional response. Jewish American GIs faced firsthand the horrors of Nazi edicts and extermination. Schuman recalled:

I had full contempt for them, without doubt. I saw many of the German prisoners. . . . [T]hey would march through our command post. I saw a lot of dead Germans on the side of the road, too. It didn’t make me too unhappy, really. I mean that’s going down to the basic thought that I had. 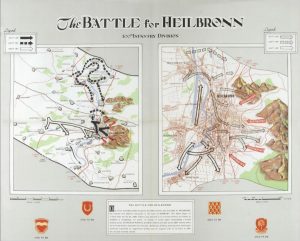 Campaign map for the Battle of Heilbronn developed by Schuman in 1945.

I often think of what life must have been like for Schuman in the decades after World War II. Alone in his canoe, painting from life in marshy surroundings. What thoughts weighed on his mind?

Through the insights afforded by Veterans History Project, we’re made more aware of the history held behind his eyes. We owe it to the veterans among our friends, families and communities to ask them questions like the ones I posed to Schuman. Have you taken the time to ask such questions yet? If so, thank you. If not, go here to find out how.