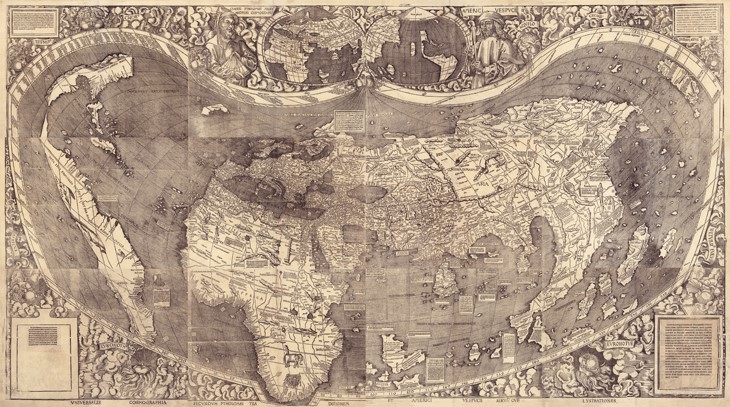 Martin Waldseemüller’s 1507 map used the term “America” for the first time in describing the New World.

–– This piece was co-written by Mike Klein, a reference specialist in the Geography and Map Division.

Few articles on the Library’s website in general, and this blog in particular, have stirred as much debate and discussion as a July 4, 2016, post titled, “How Did America Get Its Name?”

The piece reports basic history: The name “America” originated with the famous 1507 map by Martin Waldseemüller, who named the newly-discovered lands for the sea-faring voyages of Amerigo Vespuccui a few years earlier. The German cartographer suggested the land be named “ab Americo Inventore…quasi Americi terram sive Americam,” translated as, “from Amerigo the discoverer…as if it were the land of Americus or America.”

With this map (the Library holds the sole surviving copy), Waldseemüller added the Western Hemisphere to the conception of the world, asserting the existence of a separate continent in the west, surrounded by water and lying apart from Asia. It was also the first time the word “America” had been applied to it. The map is one of many featured in the current issue of the Library of Congress Magazine, “Mapping our Place in the World.”

In “Cosmographiae introductio,” Waldseemuller wrote of his map: “Today these parts of the earth have been explored more extensively than a fourth part of the world, as will be explained in what follow, and that has been discovered by Amerigo Vespucci [. . . .] I can see no reason why anyone would object to calling this fourth part Amerige, the land of Amerigo, or America, after the man of great ability who discovered it.”

Obviously, the name “America” predates “the United States of America,” which was founded in 1776, and Waldseemüller was clearly referring to what we now call South America. But for five years now, that 2016 post has bounced around the internet’s chat rooms, taking on a life of its own, as readers from around the world have debated the origin of “America” and its modern usage as shorthand for the United States. It is so popular that is has racked up 100,000 more views than the second-most popular story on this blog. 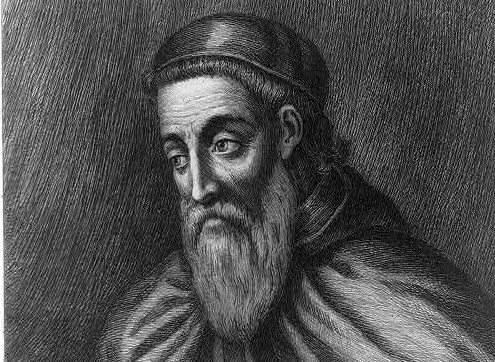 The map also portrays several of the Caribbean Islands and a small arch of land that we now recognize as North America. It shows the Pacific Ocean, although neither Magellan nor Balboa had yet reached it. As the Library’s interactive guide to the map notes, the cartographic sources that Waldseemüller used for his depiction of the New World remain a mystery, although he mentions some unknown Portuguese charts in “Cosmographie.”

The map was part of an era of world-shaking discoveries. Just 36 years later, Copernicus revolutionized our perception of Earth’s place in the universe, establishing that the sun, not the Earth, was the center of the solar system.

The revolutionary advances of Copernicus and Waldseemüller shifted the understanding of the Earth during the Renaissance, when European artists and scientists combined inspiration drawn from classical sources with information derived from Spanish and Portuguese voyages to put forth a more humanistic form of geography and self-awareness.

Waldseemüller knew the map would be shocking to many and seemed to anticipate the controversy that it would entail.

“This one request we have to make,” he wrote, “that those who are inexperienced and unacquainted with cosmography shall not condemn all this before they have learned that it will surely be clearer to them later on, when they have come to understand it.”