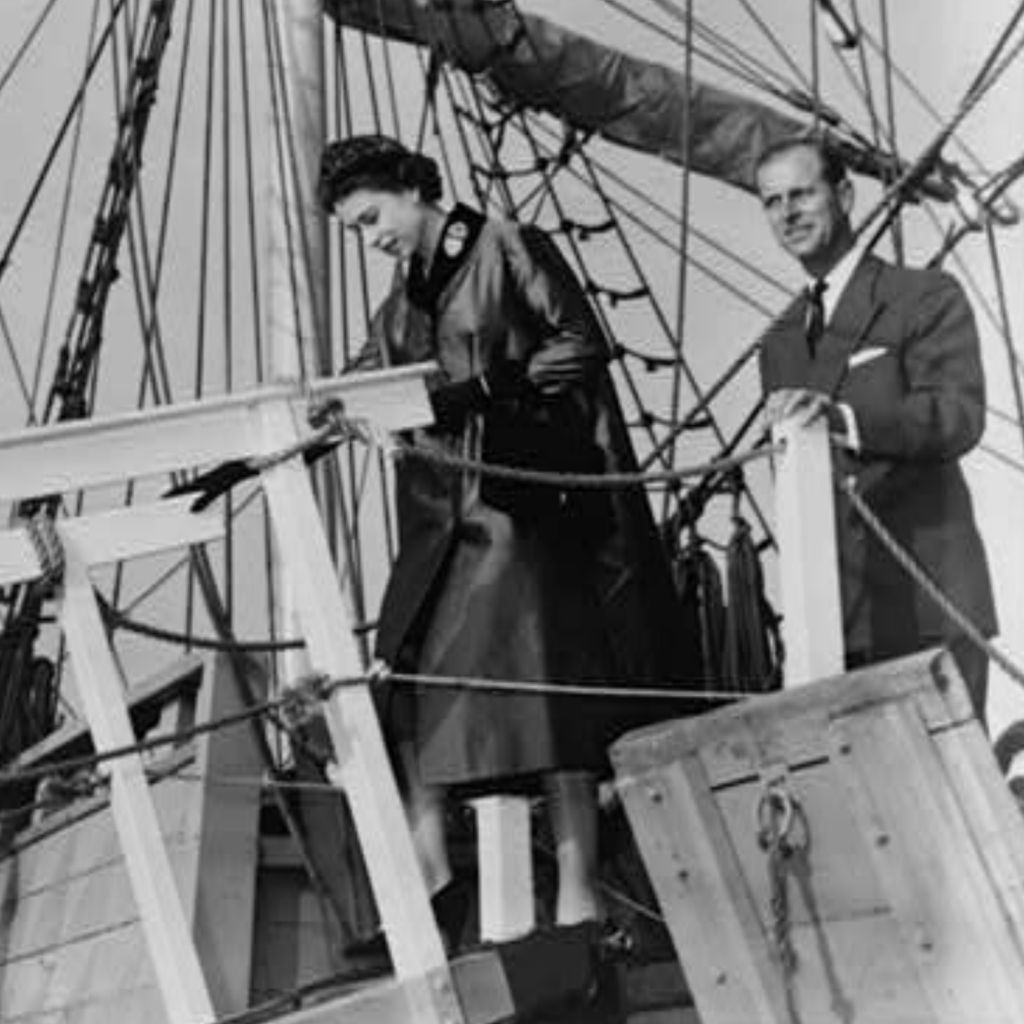 This is a guest post by Ryan Reft of the Library’s Manuscript Division.

“On days like today you ask yourself, ‘In the time I’ve been on the throne, what have I actually achieved?’ ” queries the middle-aged Queen Elizabeth II in the trailer for Season 3 of the popular Netflix series “The Crown.”

In that unsettling trailer, over a dirge-like version of the Bob Dylan classic “The Times They Are a-Changin’,” disembodied voices opine about the state of the United Kingdom. “The country is bankrupt. Our national security is in tatters,” notes one grizzled voice, which may or may not be that of Prime Minister Harold Wilson. Miners are on strike. The royal household is filled with strife. “This country was still great when I came to the throne,” the queen intones. “All that’s happened on my watch is the place has fallen apart.”

“The Crown,” which opened its third season last night, follows the long reign of Elizabeth II, which began in 1952 and is still ongoing. Season 3 tracks a period of decline from the mid-1960s into the mid-1970s, a decline that engulfed the government as well as the royal family. For those looking for some of the historical detail, it is well documented in the Anthony Lewis and the Lawrence E. Spivak papers in the Manuscript Division at the Library of Congress. Lewis was the New York Times London bureau chief from 1966 to 1972; Spivak was the co-founder, panelist and co-host of NBC’s “Meet the Press” from 1947 to 1975. Both interviewed key British leaders of the day.

In the immediate post-World War II period, behind the leadership of a Labour government helmed by Clement Attlee, the U.K. provided citizens with a generous welfare state. However, by the mid-1960s, it could no longer be sustained. The British economy “simply would not grow fast enough to keep pace with the ever increasing needs of the welfare state,” noted historian William Hitchcock.

Lewis detected trouble as soon as he took up his London posting. Writing in June 1966 that the atmosphere in London seemed “eerie in its relentless frivolousness,” Lewis noted: “What is bound to worry some who love this country is the feeling of unconcern about the problems that are Britain’s to solve.”

Months later, during an interview with Wilson at 10 Downing Street, his notes reveal the PM’s own, almost willful obliviousness. The interview started in fine high-era English fashion: “Offered drink, scotch and water, and cigar, Jamaican, before conversation began,” Lewis typed in his notes. Yet, the interview ended with a bit of skepticism. “There is no real malaise in Britain and no weakening of British character,” Wilson had asserted again and again. Lewis did not buy it, typing in a personal aside, “He repeated this so often I thought he was trying to reassure himself.”

Lewis’ papers show that he sometimes took to recording interview notes on the menus of London restaurants, such as those located in august hotels like the Dorchester and Claridge’s. These neatly bookend Wilson’s tenure. Lewis wrote in late October 1966 that the prime minister “shows intensely his delight of political triumph.” But three years later, in early December 1969, he wrote that Wilson was “good at jokes, bad when he gets pompous on actual issues.”

Devaluation, a weakening economy, militant labor unions and other forces would help to undo Wilson, as his party lost control of the government. Tory leader Edward Heath ascended to prime minister in 1970, only to be punted out four years later, as Wilson returned to power. Wilson lasted two years before being replaced by James Callaghan. He, of course, was succeeded by Margaret Thatcher, arguably the U.K.’s most famous leader since Churchill.

The queen and the royal family did not emerge unscathed during this period. Spivak’s papers show that in a November 1969 interview on the Meet the Press, Prince Philip acknowledged — evidently humorously — that the Crown too struggled mightily with finances. The joke did not travel well. Lewis Chester and John Whale of the Sunday Times wrote that his attempt at humor transformed what had been an “also ran story” into the front-page variety. “It is difficult to get a smile into print,” the two journalists observed, indicating that his jest had fallen flat when printed.

“I feel infuriated at the question put” to Prince Philip, wrote one North Leeds resident to Meet the Press. “I belong to the British middle class and like thousands of other British people, love our Royal Family and all they stand for. All I can conclude from the interview is envy on the part of countries, who do not have a monarchy,” she argued, adding, “and I have relatives who live in Cleveland.”

The late 1960s and 1970s proved to be challenging times for the West more broadly. Western Europe and America both struggled with widespread student unrest, economic uncertainty and political dissent. In the United States, one could add the travails of deindustrialization, the Vietnam War and the political scandal of Watergate.

Season 3 will no doubt offer fireworks. For historians and others looking for key background insights into the era, few resources provide clearer insights into the dilemmas faced by Britain and the United States than the Lewis and Spivak papers.