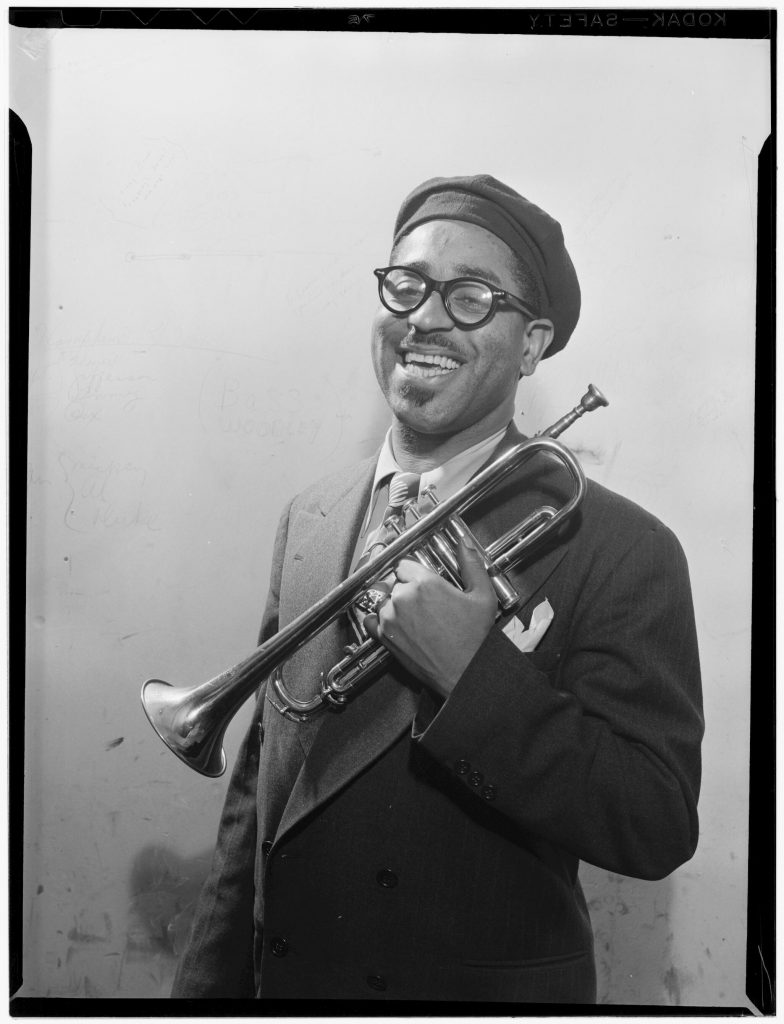 “Be-bop is a way of phrasing and accenting. The accent is on the up beat. Instead of OO-bah, it’s oo-BAH. Different chords, too. And lots of flatted 5ths and 9ths. There’s lots more to it. But just now I can’t think of what.”

Dizzy Gillespie—trumpeter, composer, bandleader—made an enormous mark on jazz and modern music, playing up until the day he died on Jan. 6, 1993—25 years ago this coming Saturday. Among his contributions, Gillespie was a pioneer of Be-bop, a form of modern jazz he created with pianist Thelonious Monk, drummer Kenny Clarke, guitarist Charlie Christian and alto saxophonist Charlie “Yardbird” Parker.

In the 1940s, Dizzy and his collaborators often gathered at Minton’s Playhouse in Harlem for after-hours jam sessions. The Three Deuces, the Troubador and the Famous Door were other popular clubs in the area, alternately called “Swing Lane” or “Be-Bop Alley,” or simply “The Street.”

The scene is well documented in the Library’s William P. Gottlieb Collection, made up of more than 1,600 photographs of celebrated jazz artists, including Gillespie. The Library acquired the collection in 1995; it entered the public domain in 2010 under the terms of the purchase agreement with Gottlieb. 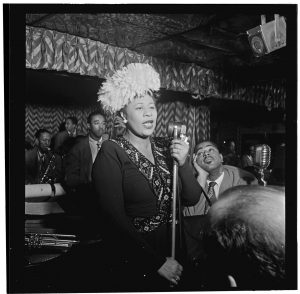 Famed jazz singer Ella Fitzgerald performs while Dizzy Gillespie gazes up at her in this 1947 Gottlieb photo.

Born in Brooklyn in 1917, Gottlieb became interested in jazz as a student at Lehigh University, writing jazz reviews for campus publications. In 1938, he secured a position at the Washington Post, where he soon began to write a weekly jazz column. When the Post decided it could no longer pay a photographer to accompany Gottlieb to local nightclubs and theaters, he bought a press camera and mastered it, becoming known in Washington as “Mr. Jazz” by age 22. Besides his Post job, he hosted two local radio shows about jazz.

After serving in World War II, Gottlieb moved to New York to work for the jazz magazine Down Beat. There he continued to write reviews and take stunning photographs that seemed to capture the essence of his subjects. In 1948, Gottlieb gave up late nights in smoky clubs for a second career as a writer of children’s books and filmstrips. He died in 2006 at age 89.

As for Gillespie, he continued to thrill audiences throughout his career with a combination of talent and irrepressible showmanship. His contributions included championing Afro-Cuban jazz and influencing such musical icons as Miles Davis. He also toured far-flung locales, making his bent trumpet, moon cheeks and compositions such as “Night in Tunisia,” “Manteca,” and “Birks Works” recognizable to jazz fans around the world.

This post draws on the Library’s “Today in History” feature for January 6.