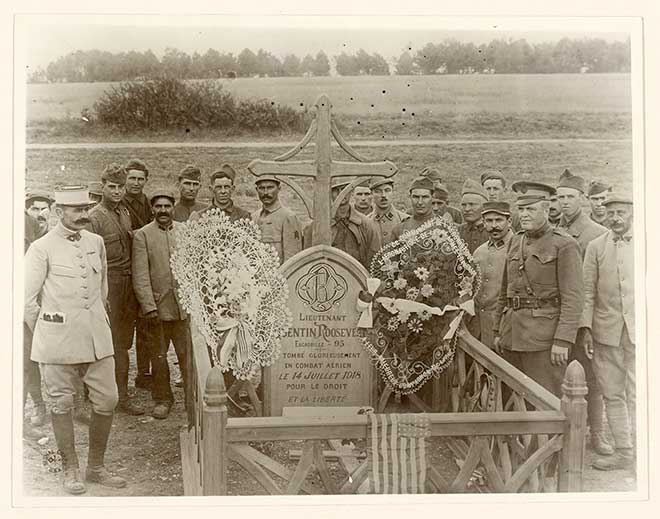 This is a guest post by Ryan Reft, a historian in the Library’s Manuscript Division.

Soldiers gather around the gravesite of Quentin Roosevelt.

Teddy Roosevelt believed in the efficacy of war. For Roosevelt, the call to arms expressed national greatness and bold masculinity. Unsurprisingly, the former president loudly championed America’s entrance into World War I, often assailing President Wilson in the years and months running up to April 1917 for his reluctance to commit America to the conflict. Roosevelt’s four sons—Archibald, Theodore Jr., Kermit and Quentin—all served. It did not end without loss. Quentin, a pilot in World War I, was shot down and perished in mid-July 1918.

Quentin’s story is told in the exhibit, Echoes of the Great War: American Experiences, currently on display in the Library. However, by traversing three different Manuscript Division collections—the Peyton Conway March, Kermit and Belle Roosevelt and Theodore Roosevelt papers—and the L’Aerophile Collection in the Library’s Science, Technology and Business Division, the heartbreaking story of Quentin Roosevelt’s death comes into greater relief and casts further light on the devastation of World War I, not only for the Roosevelts, but for all those who lost loved ones to the conflict.

In May 1918, former president Theodore Roosevelt wrote U.S. Army chief of staff Peyton C. March to thank him for appointing his son Kermit to captain of a Madrid-based artillery unit in Spain during World War I. At the end of his letter, Roosevelt empathized with March, who had lost his own son during military training earlier that spring.

“I thank you sir. You have already drunk of the waters of bitterness; I suppose I shall soon have to drink of them; but, whatever befalls, you and I hold our heads high when we think of our sons,” wrote Roosevelt. 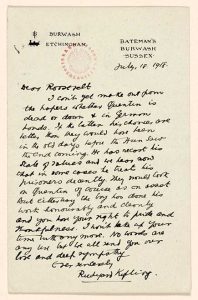 Roughly two months after T.R.’s letter to March on July 18, 1918, Rudyard Kipling, who had lost his own son in the war in 1915, wrote the aging Rough Rider to offer his own condolences. At the time, no official notice confirmed Quentin’s death, a point reflected in Kipling’s letter.

“I can’t yet make out from the papers whether Quentin is dead or down [and] in German hands. If the latter his chances are better than they would have been in the old days before the Hun saw the end coming,” noted the famous author. Whatever the case, he confided in Roosevelt, “the boy has done his work honorably and cleanly and you have your right to pride and thankfulness. I won’t take of your time with any more.” Nonetheless, deep down, Kipling knew the likely outcome: “No words are any use but we all send you our love and deep sympathy.” 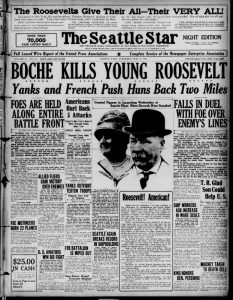 The Seattle Star was among many newspapers from around the country that covered Quentin’s death.

As a father, Roosevelt casts a complex shadow. A warmongering imperialist, he encouraged his sons to enter the war as a means to demonstrate their honor and prove their manhood. Yet, Roosevelt’s conception of war rested on dated ideals of 19th-century warfare: all horseback and chivalry rather than the mechanized grinder of WWI’s “total war.” However, he also doted on his children and loved them deeply. He would illustrate letters to them and thought of them often.

For Roosevelt, Quentin’s loss hurt deeply. Still, he also clung to core beliefs about war and death. “There is not much to say,” he wrote Kermit soon after official word of Quentin’s death came. “No man could have died in finer or more gallant fashion; and our pride equals our sorrow—each is limited only by the other.” 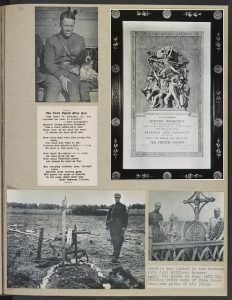 Page from family album showing photograph of Quentin, a poem about his death, a French plaque in his memory and his grave in Germany.

When Roosevelt discovered that the U.S. hoped to bring the fallen home for stateside burials, the former president once again reached out to March. “Mrs. Roosevelt and I wish to enter a most respectful, but a most emphatic protest against the proposed course so far as our son Quentin is concerned,” he informed March in a letter. “We have always believed, that ‘where the tree falls, there let it lie.’ We know that many good persons feel entirely differently, but to us it is merely painful and harrowing long after death to move the poor body from which the soul has gone. We greatly prefer that Quentin shall continue to lie on the spot where he fell in battle, and where the foemen buried him.”

This sort of circle of war, death and memorialization proved far more common for Europeans, depending on how one tabulates the numbers, roughly 126,000 Americans perished in the war. For Europeans, the numbers were in the tens of millions. Tragedy played out across nations and classes. Roosevelt’s letter to March in May 1918 opened the narrative circle that closed with Quentin’s death roughly two months later.