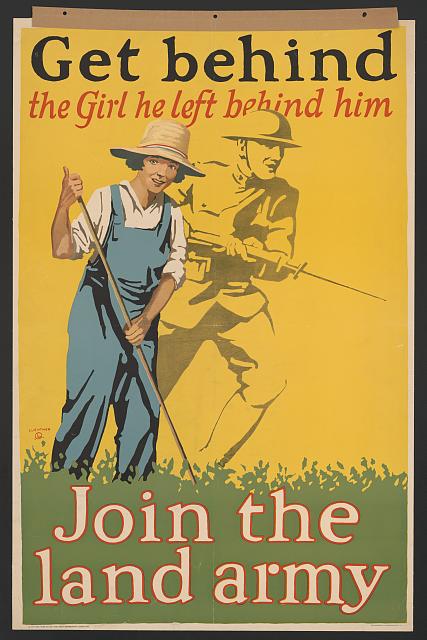 This is a guest post by Ryan Reft, a historian in the Manuscript Division, in honor of Women’s History Month.

1918 poster showing a woman tending a garden with a drawing of a soldier in the background.

“The man with the hoe is gone. Six hundred thousand of him left the fields of America last year,” observed the Los Angeles Times in April 1918. Hundreds of thousands more would follow as a mobilizing U.S. military called millions to serve. Wasted harvests and diminished agricultural production could be avoided, but it meant that others would have to farm the fields. “The woman with the tractor must take his place,” wrote the Times.

The Library of Congress exhibit Echoes of the Great War: American Experiences of World War I explores of the role of the Women’s Land Army, revealing a fascinating intersection of wartime exigencies, suffragist fervor and labor.

The idea of a U.S. women’s land army had circulated as early as 1915 due to labor shortages. U.S. entry into World War I and a series of lectures at Vassar College in 1917 by British feminist Helen Fraser brought the idea to greater prominence, points out historian Rose Hayden-Smith.

In the winter of the same year, with the nation’s food supply appearing to be at risk, food riots struck several cities.The most notable was in New York City, where “housewives reacted to an overnight jump in the price of vegetables by overturning vendors’ pushcarts and setting them ablaze,” writes historian Elaine Weiss.

Leading middle-class clubwomen in New York City founded the Women’s Land Army (WLA) in December 1917. Eventually, it established farming units in 33 states across the nation; its most successful ventures were in California, New York, Maryland, Pennsylvania, New Jersey and Illinois. Ultimately, somewhere between 15,000 and 20,000 women worked for the WLA from 1918 through 1919, harvesting the nation’s food supply. 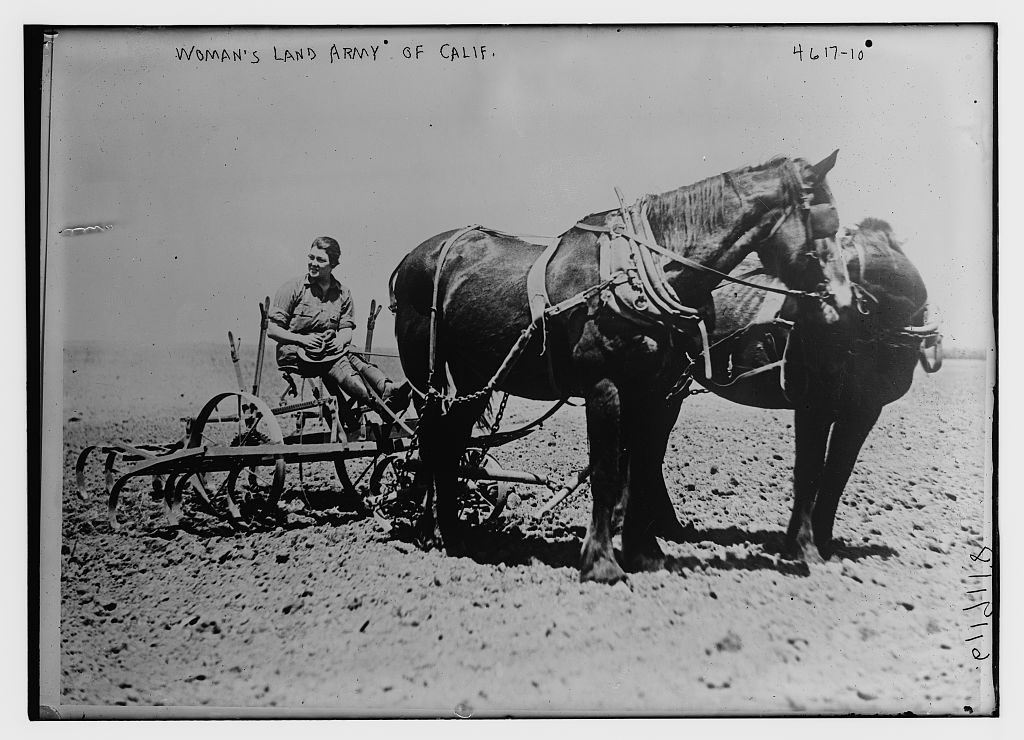 A woman farming in California.

Known as farmerettes, WLA women came from a variety of backgrounds: Members included included college-educated women, union activists, working-class immigrants, native-born middle-class clubwomen, Jews and Catholics. Evidence suggests that in Southern California, African-American women, too, might have been given the opportunity to participate, although that would have been the exception rather than the rule.

Women were at the forefront of war mobilization through the Red Cross, the YWCA and the Women’s Committee on the Council for National Defense, among other organizations and agencies. But few of these forums offered women real policymaking influence. “[T]he government viewed the Women’s Committee as device for occupying women in harmless activities while men got on with the business of war,” noted one critic and WLA leader.

Many farmers initially resisted the idea of women working in the fields, but they soon embraced it once labor shortages became starkly apparent and farmerettes demonstrated their agricultural bonafides.

The media everywhere loved the WLA. George Creel, head of the Committee on Public Information, recognized the WLA’s public relations value and promoted it frequently. Even the conservative Los Angeles Times wholeheartedly endorsed it, describing farmerettes as “gallant” and “robust.”

Despite the diverse backgrounds of WLA members, the organization remained framed by a paternalistic Americanism. Articles in its newsletter “touted openly the significance of farming for Americanization—a process of enforcing white middle class values, beliefs, and lifestyles upon America’s immigrants, African Americans, and the poor,” notes historian Cecilia Gowdy-Wygant.

Moreover, WLA leaders like Barnard College president Ida Helen Ogilvie openly appealed to racial prejudices in promoting the labor of white women. “What the WLA emphasizes is that the women we send out are intelligent, not the class of cheap labor supplied heretofore where three Mexicans were required to do the work of one white man,” she told listeners in a statement as racist as it was inaccurate.

The WLA’s achievements, much like the wartime gains made by organized labor, proved ethereal. Undoubtedly, the efforts of farmerettes and millions of other women who dedicated themselves to mobilization influenced Woodrow Wilson’s support of 19th amendment. But the large numbers of women in the wartime workforce soon diminished as soldiers returned home. When the WLA was placed under the auspices of the U.S. Employment Service, which never fully approved of it, the WLA was starved to death.

Perhaps Elaine Weiss best captures the rise and fall of the WLA during a critical moment that, despite its brevity, laid the groundwork for World War II’s Rosie the Riveter: “The California farmerette strode into 1919 atop a vegetable festooned float in the Rose Bowl Parade in January. . . . By September, she was gone.”