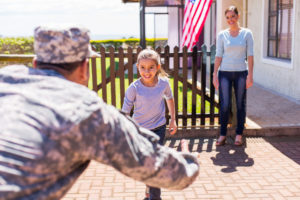 As we remember our fallen heroes this Memorial Day weekend, let’s not forget a continuing battle facing others who served: military-themed impostor scams that prey on veterans, their families and everyday citizens who honor their sacrifice.

Toll-free trickery. The latest con campaign against veterans: an impostor phone number that mimics that of the Veterans Choice Program (VCP), which allows certain vets to use approved health care providers outside of the VA system. In this years-old ruse, scammers buy phone numbers with the identical seven digits, but a different area code, of toll-free numbers belonging to trusted entities. When callers inadvertently misdial the area code, say, dialing 800 instead of 866 or 877, they are told they won a prize or are eligible for complimentary or low-cost products and services. But it’s a ploy by fraudsters to get personal and financial information.

In the latest example (starting last month), an 800-606-8198 impostor line differed only in the toll-free code from the actual VCP’s phone number (866-606-8198), used to verify eligibility or get information. Until disconnected last weekend, it offered a $100 “retail rebate” in exchange for a credit card number. “But if you give up your account information, they’ll debit your account and you’ll get nothing in return,” warned the Federal Trade Commission. “There is no rebate, and you’ll need to cancel your credit card.”

In one call to the impostor number, when asked, a customer service rep speaking with a thick foreign accent said I had reached the VCP. In another call, a different English-challenged rep said she worked “in the headquarters of the promotion’s sponsor, a company named Identity Theft Protection based in San Diego,” possibly mimicking the Identity Theft Resource Center based in that city.

Deployment deception. Posting ads on Craigslist and elsewhere, fraudsters claim to be active-duty service members about to be deployed overseas (or as a family member of a service member killed in action) who need to quickly sell a car or other big-ticket item. The price is too good to be true for good reason: There is no item, only a request for upfront payment before the item is delivered — and it won’t be.

Rental rip-offs. Stealing photos and descriptions of properties for sale on real estate websites (or inventing their own), swindlers advertise bogus rentals. Some use the same “being deployed” lie to get upfront security deposits and rent payments (usually requesting wire transfers, prepaid debit or gift cards) for what they claim are their personal homes; others pose as landlords or rental agents touting military discounts for returning vets or active-duty personnel searching for off-base housing. In addition to lost payments, would-be renters risk identity theft from disclosures they may provide on fake application forms.

Phone call phishing. In unexpected phone calls and occasional at-home visits, older vets are the usual targets of con artists who pose as employees of the VA or other assistance agencies. Aiming to glean personal or financial information, these impostors claim a need to confirm or update records, or may cite supposed policy changes for dispensing drugs or receiving benefits. As with other federal agencies, expect official VA information to be mailed, not delivered by unsolicited phone calls. Before providing any details, verify requests by calling these VA toll-free phone numbers.

Romance rip-offs. To steal hearts and money, fraudsters frequently pose on dating websites as military personnel deployed overseas — a fake identity so commonly used that the U.S. Army receives hundreds of complaints per month from victims. Stealing photos and identities (including those of actual service personnel), these self-described officers and soldiers initially woo newfound matches before asking for money via wire transfer under the guise of a paycheck snafu, medical emergency or plane ticket to meet their “true love.” Or they send their own check, claiming a bank account problem, with instructions to forward back a portion of it; the check is fake, and the heartbroken target is responsible for those funds.

Grandparent gotchas. Military families are a popular target in this long-running scheme preying on loving grandparents. Scammers get word of deployed soldiers from local newspaper stories and, posing as the named offspring, claim a problem while on R&R, such as arrest or hospitalization, to get quick cash from worried elders.

Charity cons. Bogus charities claiming to benefit veterans are among the most common and successful, especially when targeting patriotic older donors. To solicit funds, typically in unsolicited calls (often a local area code or prefix appears on Caller ID), scammers often use sound-alike names of legitimate charities or invent authentic-sounding “organizations” with heart-string-pulling pitches. Never donate over the phone unless you initiate the call after vetting charities at the Wise Giving Alliance, Charity Navigator or GuideStar.

For information about other scams, sign up for the Fraud Watch Network. You’ll receive free email alerts with tips and resources to help you spot and avoid identity theft and fraud, and keep tabs of scams and law enforcement alerts in your area with our Scam-Tracking Map.