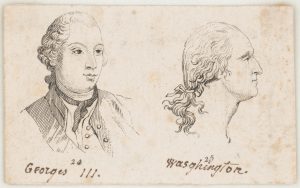 This is a guest post by Julie Miller, a historian in the Library’s Manuscript Division.

For both George Washington and King George III of England, the summer of 1788 began a year shaped by illness and worry. Even though the sources of their troubles differed, each George had reason to look anxiously across the Atlantic.

That summer, George III began what would be his first prolonged bout of madness. It is uncertain what he had, but the letters, reports and diaries of the doctors and courtiers who surrounded him describe his symptoms. These included stomach pains, rashes, lameness, blurry vision, sleeplessness and discolored urine. His psychological symptoms were even more frightening: He chattered rapidly, incessantly, delusionally, even obscenely.

Through the fall, the king’s condition fluctuated. By November, he was unfit to rule, and Parliament began to debate a bill that would have allowed the Prince of Wales, who was allied with his father’s political opponents, to rule as regent. Parliament, like the king’s household, was in turmoil.

That same summer, the United States ratified its Constitution. By the fall, as the king was falling deeper into illness, George Washington learned that his contemporaries expected him to agree to become the first president of the United States. Washington expressed his dismay in letters to his friends.

To Benjamin Lincoln, who had been one of his generals, he wrote that if he was “constrained to accept, I call Heaven to witness, that this very act would be the greatest sacrafice of my personal feelings & wishes that ever I have been called upon to make.” To Henry Knox, who would be his secretary of war, Washington wrote that he felt like “a culprit who is going to the place of his execution: so unwilling am I, in the evening of a life nearly consumed in public cares, to quite a peaceful abode for an Ocean of difficulties.” 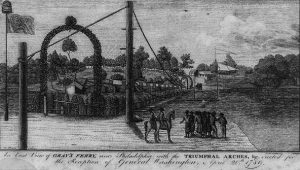 A view of a triumphal arch erected on Gray’s Ferry Bridge outside Philadelphia to receive the soon-to-be-inaugurated George Washington.

As Washington prepared to become president, he learned about the king’s madness from his European correspondents. One of these, Gouverneur Morris, had been a delegate to the Constitutional Convention and was now in Paris. He reported that the king had Washington on his mind.

“By the Bye,” Morris wrote, “in the melancholy Situation to which the poor King of England has been reduced there were, I am told, in Relation to you some whimsical Circumstances.” In one of these, “the Defender of the faith, in one of his Capricios, conceived himself to be no less a Personage than George Washington at the Head of the american Army. This shews that you have done Something or other which sticks most terribly in his Stomach.”

Was this true? Or was it gossip that Morris picked up in a country on the verge of revolution, where people were happy to spread stories about the frailties of kings? These stories do not appear in the writings of people around George III. Yet, Charlotte Papendiek, wife and daughter of courtiers, confirmed in her diary that the loss of the American colonies was still on the king’s mind five years after the end of the war.

She recounted that on being told that Lord North, who had been prime minister during the American Revolution, had been to see him, the king said, “[H]e, poor fellow, has lost his sight, and I my mind. Yet we meant well to the Americans; just to punish them with a few bloody noses, and then make bows for the mutual happiness of the two countries. … We lost America. Tell him not to call again; I shall never see him.”

In February 1789, the king began to recover. On April 23, a service of thanksgiving was held at St. Paul’s Cathedral in London. One week later, on April 30, 1789, Washington was inaugurated in New York. In his inaugural address Washington said in public what he had been saying all year in private: “Among the vicissitudes incident to life,” he told his hearers, “no event could have filled me with greater anxieties” than learning he had been elected president.

The Federal Gazette, a Philadelphia newspaper, reported on a single page on May 2, 1789, news of both King George’s recovery (above) and George Washington’s inauguration (below).

As president of the Constitutional Convention, Washington had already had a hand in shaping the office of president of the United States. Now, as he filled the seat, he and the new government were responsible for starting the federal machinery. Together, they shaped the presidency in reaction to the monarchy while at the same time, as former British subjects, it persisted in their minds as a model.

While Congress debated whether Washington should be called “His Elective Majesty” or “His Highness the President of the United States of America,” Washington wondered how to divide his power and authority as president from his status as a private person. He wrote vice-president John Adams, treasury secretary Alexander Hamilton and others for advice.

Adams reminded Washington that the presidency “by its legal Authority, defined by the Constitution, has no equal in the World, excepting those only which are held by crowned Heads,” and that it would be hard for the new nation to uphold its dignity and authority in the world without at least some “Splendor and Majisty.” 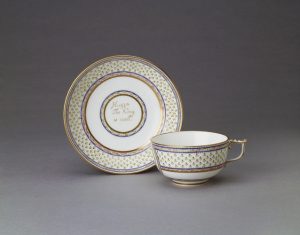 Hamilton suggested a weekly levee, or reception. The Washingtons settled on two per week. Abigail Adams, who attended the levees of both king and president, wrote that the president’s “grace dignity & ease” left the “Royal George far behind him.” Despite the ease he projected, however, Washington worried that his behavior might be taken for “an ostentatious imitation, or mimickry of Royalty.”

The summer after his inauguration, it was Washington’s turn to be ill. A tumor on his thigh, accompanied by a fever, lasted for weeks. Washington’s illness, though serious, did not compare to George III’s, which returned in 1810 and made him incapable for the last decade of his life. Nor did Washington’s two terms as president of a new nation make him an equal in power to George III, who ruled an empire for 60 years.

But for a year between 1788 and 1789, when Washington rose to lead the colonies that George III had lost, they were equal as human beings — each anxious, vulnerable and aware of his own weaknesses and his rival’s strengths.